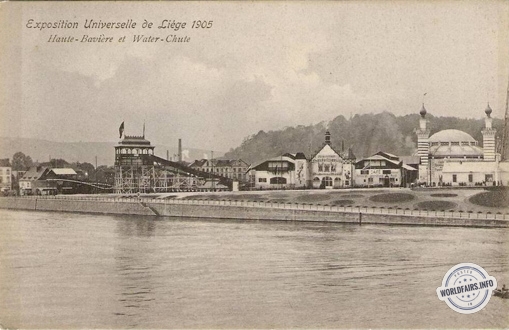 This area, which occupied the Fragnée plain, was not exclusively composed of attractions. Installations, such as those of the German company Le Forage des Mines, the Forestry and Hunting pavilions, the Soda Nitrate pavilion, the Demonstration Farm, the Belgian Agriculture pavilions and the Belgian Lifeguards pavilion, had been installed there, due to the lack of space at Les Vennes.

The Fragnée plain was separated from Old Liege by the Meuse, over which the magnificent Fragnée bridge had been built, which can be compared to the Alexandre bridge, built in Paris for the 1900 Exhibition. The high pylons surmounted by trumpeting Renommées, the decorative groups, the golden railing gave it a majestic air.

At the end of this bridge, the imposing and haughty Arènes liégeoises were massed; its walls with tasty balèvres, having a delicious patina of old age, the crenellations which jagged the upper part of it, the tower which dominated it contributed to the evocation of the feudal time in which lived this "Wild boar of the Ardennes" and of which the poet Jules Sauvenière recounted the moving adventures in a very well conceived drama.

It was with a view to the performance of this historical play that the Liège Arena was built; a few very brilliant and successful performances took place; however, for various reasons, this drama disappeared from the posters and the Liège Arena saw, in the shelter of its rough walls, the installation of a completely modern music hall. On the slopes of the feudal castle, numerous stalls with popular cafés and cheap restaurants were built.

Going along the Quai de Fragnée, which was bounded on one side by the side door of the Arènes, towards the Rue du Vieux-Mayeur, one noticed the interesting exhibition of the work of the pupils of the Institution des Aveugles, and, as one descended the aforementioned street, the square pavilion of the Sauveteurs de Belgique, flanked on either side by a small staircase and surmounted by a perron.

Retracing one's steps, one could then enjoy at one's ease, before going to the attractions, the prestigious decor of the World's Fair.

The view, at first arrested by a mass of roses stretching like a fragrant carpet on the bank, then embraced the fleave where such a pretty animation was discovered.

Here and there, motorboats, sailing boats, small yachts, Venetian gondolas, seemed to be a cheerful escort to a fly-boat tearing through the green water and hemming in this wound with a fine border of white, rustling foam.

Beyond, the façade of the great halls trembled, all luminous, against which were harmoniously opposed the clumps of trees thrown on the banks of the Jardin d'Acclimatation.

This setting was of a very captivating beauty; a fresh, healthy breeze from the river added its charm.

Facing the Fragnée bridge and near the Liège Arena, a staircase offered quick access to the Fragnée plain.

One then went around a pond full of water plants and found oneself in the midst of the hustle and bustle of the attractions.