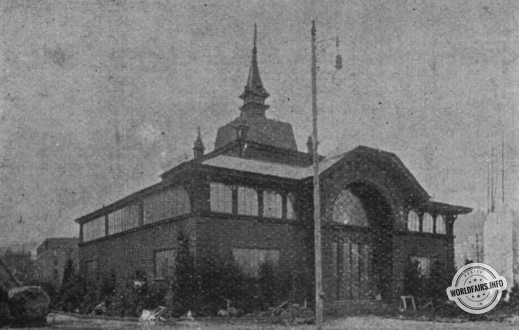 Then, leading to the Rue de Fragnée, came the curiously interesting installations and attractions of the Belgian Forestry and Hunting Group: a very original pavilion containing collections of forestry products, an experimental nursery, a series of enormous tree trunks, exhibited by the best-known firms in the timber trade.

The Hunting and Forestry Pavilion, erected on the Fragnée plain, opposite the Agriculture Pavilion, was one of those where the crowd of visitors preferred to go throughout the Exhibition: it was of great interest from the point of view of the technical and statistical data gathered on the special subject of forests, hunting and fishing, by means of suggestive didramas of great veracity and freshness, which never fail to captivate the masses of visitors.

Since the industry has taken a great development in all fields, the consumption of wood has increased to a considerable extent.

Belgium has not escaped the common law and its wood needs have followed a progressive, but very rapid, progression, especially in the last fifteen years.

On the other hand, neighbouring nations hardly buy wood from us each year for more than 13 to 14 million francs, which proves that it is for our needs, for our industries, that we use this enormous quantity of wood in addition to that which we produce.

According to the agricultural statistics of 1895, here is how Belgian forest property was distributed among the various owners:

According to the cadastre of 1850, the territorial extent of Belgium is 2,945,506 hectares; the proportion of woods and forests, in general, is therefore, in round figures, about one sixth.

The State's woods represent about the 117th part of the territory, those of the municipalities and public establishments the 18th, those of private individuals the 9th.

The same statistics also show that there were still 169,329 hectares of uncultivated land in Belgium, of which 105,365 belonged to private individuals, 58,107 to municipalities and public establishments and more than 6,856 to the State.

The latter include the alluvium deposited by the Scheldt, the coastal dunes, the Hertogenwald fens not yet reforested at the date of the statistics, and the heathland belonging to certain penitentiaries or constituting the military camps of Beverloo and Brasschaet.

The development of moorland belonging to the communes is, in fact, beyond the direct control of the forestry administration. However, the latter is making great efforts to encourage the communes to take advantage of these vast expanses of heathland, which can, if properly cultivated, become the source of considerable profits. Substantial subsidies, amounting to at least half of the total expenditure, are granted to municipalities that proceed with the afforestation of their uncultivated land.

In addition, the forestry officers give annual silvicultural lectures, the main aim of which is to promote the development of the moors.

The exercise of the right to hunt is governed by the law of 28 February 1882. According to this law, anyone can hunt on his own land or on the land of others with the consent of the owner or his successors, on condition that he can prove that he has a permit to carry weapons for shooting and a special permit for hunting greyhounds.

Licences are personal and valid for one year, from 1 July to 30 June of the following year.

It is forbidden to hunt outside the periods fixed each year by the Government, in order to ensure the reproduction of game. Every owner has the right to repel, even with firearms, wild animals that damage his property.

Finally, a regulation of 14 August 1889 provides for the destruction, hunting, sale, purchase, transport and peddling of insectivorous birds, their eggs or their broods.


The continuous increase in the number of hunters is obviously one of the main causes of the decrease in game.

The high plateaus of the Ardennes are characterised by the abundance of grassland and litter due to the climatic conditions of the region and the composition of the soil. Towards the end of winter, before the vegetation starts to grow again, it only takes a persistent east or north wind, and a few days of sunshine, for the withered grass and heather to dry out and become highly flammable. The fire breaks out and spreads in the woods and fens of the Spa cantonment with incredible ease. Against such a serious evil, it was necessary to take numerous preventive measures, of which the following are the principal ones:

1. During the critical period, notices warning the public of the dangers of fire are spread widely in the woods subject to the forestry regime.

2. Forestry officers should be recommended to be very tolerant of the local population, for whom the woods are a source of small profits. By making people love the forest, they can keep malice away from it and, in case of danger, ensure that it has many devoted defenders.

3. Establishment of a complete network of paths and firebreaks varying from 4 to 12 metres in width. The most important ones are transformed into grassland by spreading basic phosphate and sowing grass.

4. In the event of serious disasters, which cannot be fought by direct means, a strong remedy should be used: the backfire. The very intense fire that occurs is opposed by an accessory fire, closely monitored, which is intentionally lit along a firebreak placed across the path of the disaster. The fire is extinguished due to lack of food.

5. De-gassing of a strip of land, about 2 metres wide, along the railway tracks. It would be desirable for this work to be carried out annually with great care, at least on curves and steep ramps.

7. Installation of observation posts on the highest points of the area or in the middle of the wood in the top of a high tree. During the dangerous period, a guard stands there permanently. Nearby, a team of workers, busy with improvement work, is ready to help at the first alarm.

In the woods of the city of Spa, a cyclist is at the disposal of the foresters, in order to quickly connect the different rescue stations.

Among the interesting collections exhibited at the Pavillon des Forêts, we must mention first that of an industry recently created in Belgium, under the name "Boissellerie artistique d'Ardenne", in Paliseul.

This cooperative society, with a minimum capital of 5,000 francs, whose registered office is at 210, rue Royale, in Brussels, was founded in March 1904, to promote the development of the work of the Boissellerie, created in June 1903, by M. de Sébille, engineer, forestry adviser, at Framont, under the high patronage of His Royal Highness the Count of Flanders.

Thanks to the support of the Government, the Société centrale forestière and generous philanthropists, M. de Sébille organised mobile courses in modelling, drawing and sculpture in fourteen communes of the Neufchâteau district, with Paliseul as the centre, where a national museum of models has just been founded. The first courses were given for three months, every fortnight for three hours, in each of these communes. The results were conclusive; more than a hundred pupils followed these courses and immediately produced small objects remarkable for their originality and delicacy; the models were chosen from the local flora and fauna. In the first year, they were able to imitate artistic subjects with such fidelity that they immediately found outlets for them.

The courses resumed in 1904-1905 and, at present, the Society is in a position to take on all the sculptural work entrusted to it, such as: panelling, chimeras, gargoyles, coat racks, frames, dials, inkwells, baskets, easels, photograph album holders, etc., with all types of wood, under the most advantageous conditions.
Also worth mentioning is the beautiful exhibition of the Ponts et Chaussées, special service of the coast (Mr. Van de Casteele, Blankenberghe), which shows us three plans and a book of photographic views relating to the afforestation of the state dunes.

Due to the continuous and prolonged action of the winds blowing away the dried out sands, a series of dunes covering a total area of 5,000 hectares has been formed on the Belgian coast, most of which belong to private individuals.

The State owns the dunes extending from Middelkerke to Heyst, which are subject to the decrees of 31 March 1806, 14 December 1810, 16 December 1811 and the Royal Decree of 27 May 1817, which ensure the fixing and conservation of the dunes.

In the first year, it was found that the cuttings taken from the plantations along the dunes were much more resistant than those coming from the interior of the country, and it was decided to create flying nurseries in the dunes themselves.

Since 1889, afforestation work has been pursued with perseverance and tenacity. The government has established an irrigation field in the Zandpanne, where the soil of the nurseries is fertilised with sewage from the town of Blankenberghe.

The work on the Prince Albert Park has transformed 7 hectares of high, barren dunes into a large park.

The experience gained in the execution of dune afforestation works in Belgium has led to the following rules:
1° Break up the ground to a minimum depth of 11,120 m and break through the tuff layer when it is less than 1,150 m below ground level;

2° Cover the excavated land with branches, strong earth or street mud to prevent the sand from being blown away by strong winds;

4° In the sheltered and well-prepared lower parts, white alder, maple, ash, oak, birch, etc. can be planted, but planting willow, poplar and elder cuttings is the safest;

5° On the northern and eastern slopes of the hills, softwood seedlings can be planted. Two year old softwood seedlings give the best results. Pinus austriaca is best suited to the Belgian dunes. Pinus sylvestris and Corsica also do well;

6° Create in well-sheltered places, near roads and paths, flying nurseries that not only make a considerable saving in afforestation work, but also provide the planter, near the future afforestation, with acclimatised plants from which he can sort out, and which allow him to carry out all the uprooting and replanting operations in less than twenty-four hours;

7° To amend the land to be wooded, by adding strong earth or street mud.

Among the species giving the best results are poplars and willows.

Among the deciduous trees (in the lower parts), we mention white alder and ash, and willow; in the higher parts, birch and maple; on the heights and slopes, tamarix, Bohemian olive tree, dwarf willow and hypophyte.