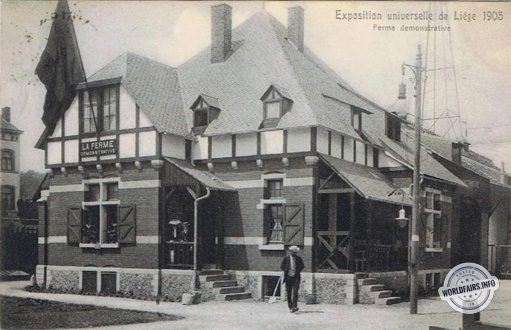 Among the various classes of the agricultural group, class 35 is particularly noteworthy. This class carried out its programme by building a farm
which attracted the attention of many visitors.

The idea put forward by Mr. De Vuyst, the agricultural inspector, to organise a community in the form of a model farm, met with unanimous approval at the first meeting of the members of this class. The project was strongly supported by the President of Group VII, Baron de Moreau, and by the Special Commissioner of Groups VII and VIII, Jules Cartuyvels, Inspector General of Agriculture.

Mr. Eugène Dumont, senator from Marbais, in his capacity as president of class 35, put all his influence at the service of the organisers in order to bring the project to a successful conclusion. Mr. De Vuyst was, from the beginning to the end, an active collaborator for the technical and executive committees, as well as for the class 35 office.

Senator Dumont, president of the Société anonyme de la Ferme Démonstrative, is the most authoritative representative of Belgian agriculture in our High Assembly. For a quarter of a century he has attached his name to all the laws passed in favour of agriculture, our agricultural industries and the rural classes.

The Dumont family owns and operates several large contiguous estates in the heart of the rich Brabant plains, which have been the battlefield of Europe on many occasions.

The Chassart farm, created at the beginning of the 19th century and well known to all agronomists, is the largest in Belgium. The most varied agricultural industries can be seen operating there, all equipped and managed according to the latest progress: grain distillery, huge malting plant, flour mills, sugar factory, granite quarries, etc.

Let us add that the patriarchal mores in honour at the Chassart estate and which govern the relations between the owners and the numerous workers are not the least of the elements of the persistent success of this colossal agricultural enterprise, of which Belgium is rightly proud.

Wishing to interest the generality of farmers in its work, Class 35 undertook to demonstrate in a general way some of the improvements and provisions towards which it was necessary to tend in the future, rather than to build a model farm of this or that region. The construction was therefore called a Demonstration Farm. In addition to these provisions of general interest, the visitors found there applications of the latest scientific data and especially of the rules of hygiene which are essential in any farm. They were able to judge, in their natural setting, the various materials available to them, both for the construction of new farms and for the transformation of old ones. Not only buildings were erected, but a fully furnished farm was presented, equipped with modern machinery, up to date with progress, supplied by national industries.

Next to the farm was a vegetable garden with all the market garden and medicinal plants that one should have at hand.

In order to meet the wishes of the promoters, a draft plan was first submitted to the observations of a technical committee, comprising specialists from various regions of the country.

Mr. H. Van Massenhove, architect in Brussels, drew up the construction plans according to the advice of this committee. The execution, the choice of materials and equipment were entrusted to an executive committee, which set itself up as a cooperative society under the name of "La Ferme Démonstrative".

In order to solve the financial side, the executive committee appealed to the farmers of the country as well as to people with a special interest in agriculture. This appeal was heard and the Society was established on 20 December 1904 with 41 founding members who together contributed a capital of 6,500 francs. Later, a few new members were added, bringing the capital of the society to 8,100 francs. The executive committee became the company's board of directors.

Obviously, the sum of 8,100 francs was still insufficient to build, in hard materials, a farmhouse measuring 45 metres long and 12 metres wide, plus all the outbuildings, manure pits and a covered shed, for a total estimate of 24,600 francs. It was then that, thanks to the intervention of class 35, the executive committee of the society obtained a subsidy of 18,000 francs.

In spite of the subsidies, the society, giving up its capital, would not have been able to meet its budget if it had not found the generous support of its exhibitors, some of whom brought their materials free of charge; the others preferred to keep the property while contributing to the costs by paying an honorary membership fee. Pursuing the aim of the Technical Committee and wishing to justify the title adopted for the farm, the Executive Committee endeavoured to obtain the greatest possible diversity in the materials used.

It approached all the industrialists, asking each one to come and show his speciality and it obtained the foundations in rubble stone with asphalt felt to prevent the dampness of the ground from rising into the walls; - the bases in sandstone mosaics; - the cut stones in limestone and artificial sandstone; - the walls in special facade bricks and ordinary bricks; - the coverings in earthenware, majolica and cements; - woodwork impregnated with carbonyl; - vaults in brick, concrete and ceilings insulated with quercine; - partitions in Belgica slabs; - roofs in hooked slates, overlapping tiles and corrugated sheets; - wooden and wrought iron fences.

The same diversity was maintained in the interior design of the farmhouse and in all the equipment. For the latter, each manufacturer preferably supplied the machine or tool that constitutes its speciality. The number of exhibitors totalled 42 who, after approval by the Commissariat General, were admitted to compete in their respective classes, with the right to the regular awards.

The complex of buildings included: a dwelling house, a stable, a pigsty, a sick bay, a henhouse, a shed for the preparation of food, a barn, a shed for farming implements, a covered manure pit.


Garden and orchard of the farm.

Mr. J. Debeur, president of the professional school of horticulture of Liege, and Mr. Marchandise, head of culture at the Botanical Garden of Brussels, took special care of the garden and the orchard adjoining the farm. The demonstrations were given by the students of the horticultural school of Liege, under the direction of Mr. Lecrenier, professor.

In the orchard were the main varieties of fruit trees, as well as the means of protecting them during their young age.

Class 35 of the Exhibition (Special Agricultural Education) organised in the Demonstrative Farm demonstrations of home economics and dairy farming, under the direction of Mr. Thomas, State Agronomist, Grivegnée. The mistresses of the country's flying dairy schools, today's agricultural home economics schools, were called upon to come in turn with their pupils to take the place of the farmer and her family.