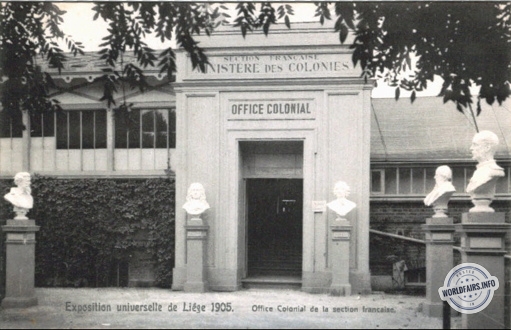 Not far from the large terrace which, at the beginning of the Jardin d'Acclimatation, rounded its flowery balustrade on the bank of the Meuse, old greenhouses, converted into a pavilion, housed the exhibition of the French Colonial Office.

A double row of busts of famous admirals and explorers led to a sort of landing occupied by a sales office for colonial publications. On either side of this were the entrances to two rooms of the Colonial Office. The first, on the right, contained a wide variety of ethnographic collections and numerous samples of colonial imports and exports; the other, on movable shutters, contained wall maps and graphics relating to the various colonial services.

The programme of the latter was very extensive.

Inspired by the considerable extension of France's domain and by the ever-growing desire of its nationals to find an outlet for their trade or personal initiative outside the mother country, the Colonial Office provides them with definite indications, officially controlled and supported by figures, on all questions concerning the development of France's distant possessions.

Moreover, the decree instituting it on 14 March 1899 specified its scope in these terms
1) To centralise and make available to the public information of all kinds concerning agriculture, trade and industry in the French colonies.
2) To ensure the operation of a permanent exhibition of colonial trade.

Several departments are responsible for carrying out these wishes. These are the departments of commerce, colonisation, statistics and the library.

The trade department deals with all matters relating to trade between the metropolis and the colonies. This section has a wide range of responsibilities. In addition to information on all aspects of transport: freight, insurance, means of embarkation and disembarkation, customs duties, octroi, etc., it has created a monthly information sheet giving detailed information on a particular point which is still unclear and which was previously the subject of a serious investigation on the spot, while the general information also given in this bulletin makes it a real link between the colony and the mother country.

In this way, the visitor can quickly get a clear idea of the value of the product he is looking for and study its different qualities on the spot.

The colonisation service deals with the introduction of emigrants to the colonies and related matters such as the tax regime, the military regime, the placement of young Frenchmen in commercial and industrial houses and in agricultural holdings.

One of the good effects of this service has been, at times, to dissuade from their projects born of an unthinking enthusiasm, certain Frenchmen who, although having none of the qualities required for success in the colonies, imagined that they would find in these distant lands a second earthly paradise.

The statistical service published annual bulletins giving information on trade and navigation, the population of the land and the production of each colony.

The exchange of its bulletins with similar publications from foreign countries has created a very interesting collection, which facilitates the study of comparative statistics.

One last service of the Colonial Office, that of the library, is growing in importance, so much so that in 1904 the number of readers was 3,000.

These indications obviate the need to comment on the objects exhibited in the Colonial Office at the Exhibition.

The room on the right, containing the most interesting elements of the Commercial Museum, whose usefulness we have highlighted, also contained various ethnographic collections, forming a picturesque scattering of indigenous instruments, boats in use on various rivers, headdresses, weapons, furniture, musical instruments, etc.

The Museum of Natural History also exhibited a collection of manufactured products and raw materials from the colonies, a collection of insects that attack colonial products, etc.

The room on the left contained the official and administrative part of the colonies. The various departments of the General Governments of the West Coast of Africa and Madagascar, Indo-China were represented there, not only by maps, charts, brochures, but also by photographs of picturesque corners or scenes of local customs, likely to interest every visitor.

It is reasonable to believe that the French Colonial Office at the Liège Exhibition will have rendered to some of our nationals the precious services that it renders to many French people in the country that created it.