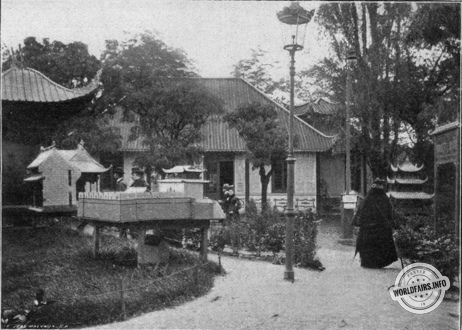 The Far East evoked there, in this time when it seems to be waking up, was in no way shy or cruel to foreigners. The yellow faces that looked at us over the counters laden with carved stoneware, dragons, porcelain vases and packets of tea, showed only the placid physiognomies of salesmen; a cinematograph set up nearby recalled the most refined aspects of present-day civilisation.

Climbing up the mound on which the six-storey pagoda was perched, one could see dreamy, enigmatically smiling Buddhas in beautiful display cases with dragon-cut corners; below was a Chinese café serving sorbet and iced tea. From the top of the pagoda, the view was marvellous. At the foot of the pagoda, a succession of lakes gleamed in the burning sun and reflected with absolute fidelity the white buildings scattered among the trees; here and there the flags stretched in the wind; the tree tops swayed softly, stealing a piece of the tiny alley. In the latter, the walkers seemed like working ants, straying from time to time from the line but soon returning to it; everything, from up there, showed an air of celebration and joy.

The exit was through the Chinese door, a large monumental entrance, or pailow, composed, as in China, of a central door and two smaller bays open on the sides. The whole was topped by roofs with raised ridges and covered with inscriptions welcoming visitors.