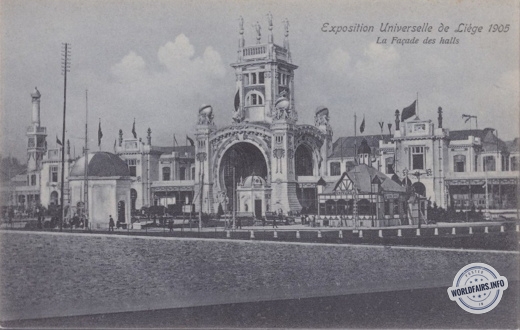 The Plaine des Vennes, on which the immense construction of the halls and a host of private pavilions were spread out, was once a kind of marsh; in winter and summer, an immense wild meadow with, here and there, in the depressions of the land, pools where frogs swarmed. In the distance, a curtain of poplars covered a sooty and smoky vision of coal mines and factories. The place, sad in winter, because of the countless flocks of crows and magpies that hovered over the heads of the few passers-by, was brightened up a little in summer by the presence of children on holiday who had come to find an immense field, favourable to their games.

The boulevard Emile de Laveleye was then formed by the Ourthe, a river with irregular banks, eaten up by the water overflowing in winter and strewn with pebbles. A few fishermen indulged in their favourite pastime there.

We have already recalled the great works that had to be carried out to level and clean up this vast plain; how useful these works are now! A luxurious district will be born on this consolidated ground, a large boulevard will cross it, and where the World's Pair was, innumerable constructions will rise where Liege will pour the excess of its population.

The Mativa quay which led to it, although improved a few years ago, was still rather primitive in appearance, especially its banks where the washerwomen spread out their washing and where, in summer, bands of children of the people frolicked drunkenly in the tall grass.

The Exhibition converted this rough bank into a regular one, supported by water walls. The point of the Monnier house, which had once been chipped, was consolidated, and the Ourthe, which had been filled in, saw its course enclosed between high walls; everything became clean and healthy, if not picturesque!

The Quartier des Palais, as we have said, was linked to this second Exhibition area by the Mativa Bridge and the quay of the same name. This bridge, a marvel of lightness and finesse, gracefully linked the two banks of the Meuse Diversion; it was slightly arched and decorated here and there with escutcheons and small French flags.

From the centre of this bridge, one enjoyed a superb view; between the bank of the Mativa quay and the tip of the Boverie peninsula, the diversion of the Meuse was spread out; the Fétinne bridge, the Amercœur gate, the entrance to Old Liege, and the numerous roofs of the old quarter framed this landscape, while the Fragnée bridge, golden and majestic, underlined with its dazzling contours the great distant woods of Kinkempois.