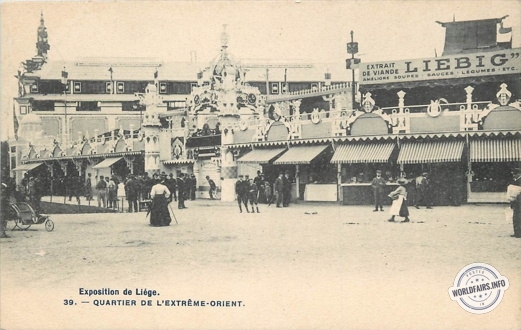 The Far East had the hustle and bustle of a caravanserai where caravans from the most diverse countries would gather. In the front of the building there were numerous stalls selling copper vases, exotic objects and even a fairground attraction: the miraculous fishing.

But the interest of this district lay rather in the attractions of its interior part, negroes playing interminably the tom-tom on a kind of platform and a superb Hindu, leading to the entrance, already indicated the attractive kind of spectacles offered to the public.

The aim of the enterprise had been to give the vision of a corner of the world, marvellous like a fairy tale from the Arabian Nights. Inside, there was a Chinese theatre where an English theatre company gave a great Franco-Indian ballet; further on, a Sudanese bazaar brought together workers from Egypt and Abyssinia who made various products on the spot, notably vases with very beautiful lines.

Next to it was a harem copied from that of a famous Radja, then an enchanted pagoda where the latest advances in machinery and electricity gave the illusion of a fairy tale come true.

The Theatre of Mysteries introduced us to the Buddhist beliefs and the salamalecs of the Fakirs; an Indian fair showed us the natives of Pondicherry and Chandernagor; finally, the Japanese moguls, a kind of tobogan, gave the illusion of a rapid slide, among a crowd of obstacles.