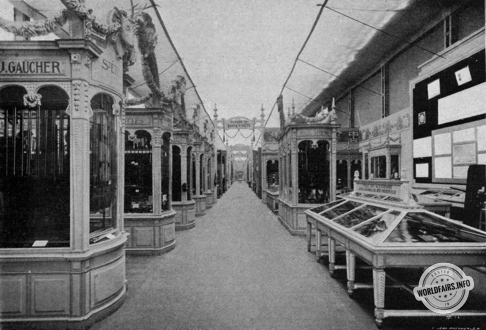 With most Army and Navy suppliers exhibiting their products in their industrial classes, there were only a few very special exhibitors in this group. Twenty-six exhibitors occupied 222 square metres, 72 of which were housed in a large tent that housed the hospital services. This tent, set up on a special site in the gardens, contained the exhibits of the societies providing assistance to the wounded (Dames françaises and Union des Dames de France).

The Compagnie des Forges et Aciéries de la Marine et d'Homécourt, whose important artillery equipment was detached in the Belgian International Military Pavilion as a result of its status as supplier to the Belgian Ministry of War, should be considered as belonging to this group.

In its task, the artillery jury came up against an insurmountable difficulty.

Having to judge the merits of the material presented by the above-mentioned Company, better known under the name of Société de Saint-Chamond, as well as by various other companies of the first importance, such as Krupp, Cockerill, the Belgian artillery manufacturing establishments, it could not attribute to any of them a particular rating, merit, in artillery, being established only after very long experiments and not very easy to practise in the halls of a World's Fair. The jury therefore confined itself to appreciating the overall interest of the exhibition of the above-mentioned establishments and was thus led to propose the attribution to each of them of a grand prize diploma.

Class 120, the first of the group, dealt with artillery armament and equipment.

This compartment, which grouped the artillery equipment, had an appearance which did not fail to arouse a sort of instinctive emotion, made all the more fascinating by the terrible war whose end almost coincided with the end of the World's Fair.

Ordinary weapons, rifles, pistols, revolvers, fine, polished, light, do not reveal by this aspect the power they confer on the owner. The artillery equipment, on the other hand, by its massive, gigantic forms, gives a good idea of its strength, of the power of destruction it contains. The visitor had an instinctive fear to pass in front of these cannon's mouths, pointed at him, and blowing in his face the blackness of their "soul".

France was represented, in this order of products, by two exhibitors.

The most diverse ammunition for weapons of war of all systems and all countries formed the exhibition of the French Society of Ammunition for hunting, shooting and war. One could find ammunition for firearms, ordinary cast iron shells or bullet shells, grape-shot boxes, ammunition for rapid-fire cannons, percussion fuses, Budin system, Nordenfelt, etc., with time and double effect.

The Compagnie des Forges et Aciéries de la Marine et d'Homécourt took part in the next class, to which the military engineering and related services belonged.

This company exhibited a sheet metal disc and armour plates, made of special metal, of a respectable thickness and in which, however, shells had been lodged, some of which were embedded in the metal of the armour.

In contrast to the first three classes of the group, the last three were quite harmless in appearance; the last one was essentially humanitarian.

The first of these grouped books, maps and various instruments used by the army, such as glasses, binoculars, sights, etc., exhibited by Mr. Krauss of Paris. Many publications, brochures, maps, were presented by Messrs Berger-Levrault et Cie of Paris, Chapelot et Cie of Paris, Charles Lavauzelle of Limoges.

The last class dealt with army hygiene and sanitary equipment used in wartime. It is fortunate that some of the objects in this class were far removed from the devices of destruction, as they would have added to the horror of it.

The Société des Dames françaises, a society whose aim is to give relief to the wounded, was also part of this class. It had erected a vast tent on the quay beside the Meuse, near "Vieux-Liège", where there was a complete hospital and ambulance equipment.

The description of Group XIX began with an enumeration of the machines of devastation and death; we are pleased to end it by mentioning this association with a highly charitable and profoundly humanitarian aim.