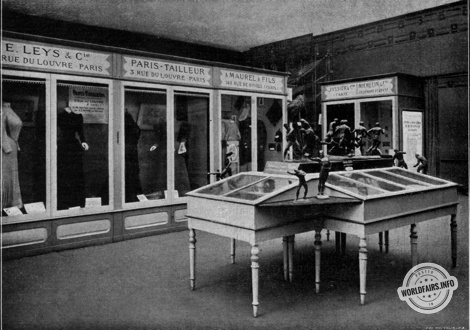 In recent years, questions of physical exercise and sports have taken a considerable place in the preoccupations of peoples who rightly consider them as an important factor in education.

Although Group XX comprised several classes, the French Commissariat General had rightly constituted for the whole group, as had been done at the Saint-Louis Exhibition, a single Committee responsible for the admission and distribution of the different classes.

As in Saint-Louis, Messrs D. Merillon and Jules Marcadet took on the difficult task of carrying out the programme decided by the Committee. Assisted by a commercial sub-committee, headed by Messrs. Chanel and Voilant, they succeeded in grouping nearly 60 exhibitors.

In the French group, alongside the major sports federations, there were scholars who, like Dr. Richer and Dr. Perigniez, Professor Demeny, have devoted themselves to the special study of the physiology of body exercises.

The Union des Sociétés de Gymnastique de France, founded in 1873, has a thousand societies with a total of 150,000 gymnasts. It is recognised as being of public utility and can claim the creation of many useful institutions: the higher course of physical education; international tournaments; the law of corporal gymnasts, etc. The Union of Gymnastics Societies won a great prize at the Universal Exhibition of 1900, in Saint-Louis and in Liège.

The Union des Sociétés de tir de France was founded in 1886; it groups 921 societies representing more than 170,000 members. Its aim is to encourage and support the efforts of all shooting societies, to promote their development, to obtain measures of general interest from the public authorities and, in a special way, to organise national shooting competitions. Recognised as a public utility in 1897, the Union des Sociétés de tir won a grand prize at the 1900 Universal Exhibition in Saint-Louis and Liège.

The Union des Sociétés françaises de sports athlétiques was founded in 1887 by the first two French athletic societies: the Racing-Club and the Stade français. This federation, which currently groups together more than 800 associations representing 80,000 members, is at the head of the sports and educational movement. It has exerted a useful and happy influence on young people and is responsible for the creation of numerous school associations.

The Union des Sociétés françaises de sports athlétiques, which exhibited for the first time, won a gold medal at the 1900 Exhibition and at Saint-Louis. The grand prize in Liège.

A grand prize was also awarded to the Touring-Club de France, that great association founded only twenty years ago to encourage tourism and help its development. To praise it is superfluous. The ever-increasing statistics of the excursionist movement attest that its efforts have not been in vain.

The Union vélocipédique de France, which governs the sport of cycling, both amateur and professional, has nearly 70,000 members. It was awarded a diploma of honour.

The Union des Sociétés d'Instruction Militaire (Union of Military Training Societies) was excluded from the competition.

These federations were joined by important sports societies:
The Stade français, founder of the U.S.F.S.A., has had and still has a great influence on the development of athletic sports in France. It is a society for the encouragement of physical education; it opens its doors freely to all university students, organises school competitions, etc. Founded in 1883, the Stade français has nearly 1,000 members. The Minister of Public Education has placed at its disposal several hectares in the park of Saint-Cloud, and the Stade has made it a model playing field. Football, running, lawn tennis, long palm, fencing, etc., etc., can be played there. It won a gold medal in Saint-Louis and was eliminated from the competition in Liege.

The Société des sports athlétiques, which, with the Stade, contributed greatly to the development of physical education, and the Racing-Club de France, whose installation in the Bois de Boulogne can serve as a model, were awarded a diploma of honour.

In addition to graphic documents and various works of interest to sports societies and physiologists, the French exhibition included the many and varied objects that constitute the equipment necessary for sportsmen: tourist costumes, shoes and gaiters for hunting, lined and rubberised clothing for cars and sports, hats, caps, etc.

In the midst of this rather severe exhibition, the marvellous statuettes of Dr. Richer cast a most interesting artistic note. Each of these subjects, runner, footballer, fencer, wrestler, was represented in the middle of the action, with the muscular protrusion, indicative of the movement.

They were the summary of the conscientious physiological studies of the author whose remarkable treatises on anatomy earned him the chair of anatomy at the Ecole des Beaux-Arts.