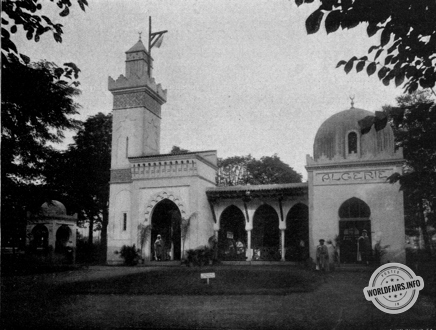 Algeria is neither a colony properly speaking nor a French department in the exclusive sense of the word; it is part of both, coming under the political authority of the Ministry of the Interior and being placed administratively, like the other French possessions, under the high direction of a Director General.

Algeria's participation in the Liège Exhibition was placed under the direction of Mr. Gérard, Director of the Office de l'Algérie, delegated by the General Government. Assisted by Mr. Henri Dupont, he brought to his task the highest and most eclectic understanding. While endeavouring to put Algerian products in the best possible light, whether they came from settlers or natives, he was also able to interest visitors by the superb arrangement of the samples on display, and by the beauty he was able to impart to the displays, the elements of which were necessarily somewhat banal to the eye. Finally, he endeavoured to revive the vestiges left there by Roman civilisation and grouped them in a room where indigenous art was also represented.
The façade of the Algerian pavilion faced the pavilion of the French possessions in Africa and was itself opposite the small Norwegian pavilion.

Its bright whiteness was made more cheerful by its easy and fine architecture, while the green palms scattered among the colonnettes of its portico, where the warm red hangings made the bays they contained intimate, contributed to make it more harmonious.
At the two entrances to the façade, superb spahis completed the evocative illusion.
In the Algerian Moorish style, some of the details of this pavilion were similar to the architecture of the 15th century, known as Tlemcenian. It covered a surface area of 250 square metres and consisted mainly of two long galleries, arranged on either side of a square room, preceded by a portico sheltered by a Moorish-style canopy.

An entrance porch reminiscent of the door of the Mohammed-el-Kebir mosque in Oran, gave access to the first gallery. A minaret of the same style surmounted it at a height of 18 metres; it was flanked, on the opposite side, by a dome with narrow skylights.

The first long room, which one entered, delighted the eye by the beautiful colour of gold spread everywhere, in sheaves, in panoplies, in bottles of olive oil.

Here and there, among this decor, were opened bags full of cereals; one would have liked to pour them into the palm of one's hand, with the pious gesture one would make when weighing grains of gold. Reading the names on each bag was not at all tedious, so much so that it was wrapped up in an imagination of healthy agricultural decorations. One read: durum wheat, barley, linseed, bearded wheat, tuselle, semolina, soft wheat, and one felt full of respect for this wealth of fertile soil. Stacked in columns or arranged in lying swarms, bottles of various shapes and colours attracted attention; they contained Algerian wines and olive oil.

The olive oil industry, thanks to a more rational and faster cultivation, has developed considerably in recent years.

As for wine production, which is the first and most important wealth of Algerian soil, the fact that it grouped 285 wine growers in Liege dispenses with any comment. Various liqueurs were also represented by bottles of mandarin, gentian, vermouth, cinchona and bitter.

These were next to bottles of various perfumes: essences of roses, geraniums, eucalyptus.
Cigarettes, cigars and manufactured leaves of Algerian tobacco are too well known to dwell on their participation in the pavilion; next to them, articles of brushwork, ropes, textile fibres, wools, silks, continued the participation of derivatives of soil products with samples of cork, esparto grass, baskets, works of indigenous basketry.

The central, square room, overlooking the portico and through narrow windows with green stained glass, was, from the local point of view, the most interesting.

Here and there, on pedestals, ancient statues showed the imperishable mark of the Romans on Algerian soil. One could see a Venus Aphrodite, an Artemis and a Dyonisios.

In the middle, a mosque lamp swayed gently; on the floor, heavy carpets and a stool inlaid with mosaics seemed to establish the existence of a being in this reproduction of the interior of an Algerian house.

An artistically careless hand had thrown in a scattering of small objects, vases, trays, and copper containers, which helped to make the room even more lively.

The gold-embroidered spartan objects, the babouches, the revolver cases, the covers, constituted a charming summary of indigenous art. One could imagine a fantasia in which these objects would have shone in a fantastic ride of small dashing horses among a flight of coloured fabrics and the clear ringing of necklaces.

The third room of the pavilion, identical to the first, consisted of a gallery divided into two rooms reserved for the Mining and Quarrying Exhibition.

In the first room, relief maps of different exploitations allowed the visitor to identify the places from which they originated, as well as the various mining samples on display there: blocks of salt, calamine, galena, phosphates and iron pyrite.

Then came marbles of rare beauty and golden onyx, red, agate, African jasper, oriental alabaster, the original and faithfully moulded statuettes, samples of the perfection achieved in the steam brickworks.

The second room of the gallery, close to the exit, grouped the exhibition of the Onyx Society of Sidi Haura.
The precious stone was shown in beautiful uses, such as two banisters, two fireplaces and a highly decorative modern-style table. Among the exhibitions of the individual or collective industry, we would like to highlight one in particular: that of the Manufacture des tapis d'Orient, Algiers, which employs only Algerian labour. The pro-carpets from this factory were spread out in abundance in the pavilion, in portières at the bays, on the floor or thrown carelessly on the corners of the stalls, while under the portico, two teenagers with large trousers wove, with their agile fingers, these carpets in warm and sumptuous shades.

Finally, by consulting charts and brochures, one could see the new effort made by the Administration to attract to the colony an ever-increasing contingent of metropolitan families, by means of the creation of new centres of European population, through the free allocation and sale of open office land.

From the scattered exhibition in the pavilion, corroborating the information given in the brochures, it was easy to see the predominant place held, in the concerns of the General Government of Algeria, by the concern for a provident and equitable administration of the Muslim populations.

Algeria has long been familiar to us by name; books by French writers have made it known and appreciated. Many a visitor would have liked to express his deep gratitude to the organisers of the Algerian pavilion for the evocative power they had managed to bring out in a few artistically chosen objects.

If the Liège Exhibition was charming, it is certain that the white pavilions of the French colonies, scattered among the foliage and sitting on the shores of the lakes, contributed in no small measure to this flattering impression, and among these palaces, it is no less certain that the Algerian pavilion was, in this respect, a primordial element.