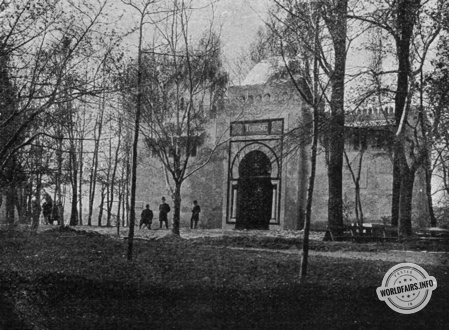 In an Arab-style pavilion, whose dome and minaret were inspired by those of the mosques of Tunis and whose interior reproduced the typical layout of Moorish palaces, the Administration of the Protectorate had grouped together documents and specimens capable of giving visitors to the Exhibition a brief but accurate impression of the resources of Tunisia, of its past, of its present economic development and of its ever-increasing progress.
The aim was to create new relations between the Regency and Europe; the Tunisian participation in our Exhibition will certainly have contributed greatly to this. If we take into account the increase in tourism, the speed and multiplicity of transport, the final result can only be a very significant increase in commercial and industrial exchanges.

Bathed to the north and east by the Mediterranean, situated opposite Sicily, Malta and Sardinia, Tunisia's western frontier touches Algeria, and to the south, the Saharan desert; with its varied aspects, from the mountains of Kroumirie to the oases of Djerid and the steppes which surround them, it is the Orient at the gates of Europe.

The regime, born of the Bardo Treaty, has maintained Tunisia's administrative autonomy under the French protectorate since 1881; from an economic and colonial point of view, the situation is also very interesting. Although relations between Belgium and Tunisia are constantly progressing, as the graph placed in the pavilion before the eyes of the visitors indicated, trade still only reaches an annual figure of 4,000,000 francs.

As soon as you enter the pavilion, samples of wood and cork were displayed on the pillars supporting the dome; Tunisia currently exports two to two and a half million pieces of cork in the raw state, grated or in planks, as French customs tariffs do not allow the manufacture of corks in the country of the raw materials.

Let us review some of the main products of the country's fauna. Among these, wool occupies a preponderant place and the importance of the Tunisian sheep population makes it possible to export considerable quantities of it, which are sent either as wool grease or washed, in addition to the local use for the indigenous blanket and carpet industry. The skins of various animals also make up a large part of Tunisian trade. These are goat skins, large skins, dry sheep skins, and ox skins, the quality of which varies according to the year and the greater or lesser abundance of pastures, and the price of which varies greatly according to the influences of the foreign market. Camel and goat hair are quite famous.

Among the products of the earth, cereal crops deserve to be better known; Belgium, whose immense industrial activity has reduced agricultural exploitation to a very small proportion, seems not to have yet tried the Tunisian hard wheat so appreciated by the Marseilles flour mill. Barley has special qualities for brewing which have made it prized as far away as England; oats, maize, sorghum, millet, beans, flax, coriander, fennel and cumin are also well known.

The eastern coast of Tunisia is the land of almond trees, whose cultivation increases in importance from year to year; Sfax sees pistachio, dates and figs grow in its vicinity.

In a compartment of the pavilion, a relief map, protected by a glass case, reproduced in full the famous oasis of Nefta, where exporting traders have recently settled. In the not too distant future, it will be linked to the coast by the Gassa railway.

Oranges and mandarins are almost entirely consumed locally. Interesting efforts are however being made to develop the trade in fruit and early fruit, and already the lemon from the area around Nabeul and Hammamet is being exported to
Northern France.

In certain regions, the soil of the Regency was covered with aromatic plants (thyme, rosemary, geranium, passerine), which perfumed the indigenous honey, the qualities of which were beginning to be appreciated in foreign countries and especially in Belgium. Agriculture is assimilating the latest improvements made by the Europeans.

The olive industry, at first practised exclusively by the natives, and by primitive means, takes from year to year, thanks to the modern improvements of European factories installed there, a very appreciable importance. The residues still give a lubricating oil and soap. These secondary industries are mainly located in Sousse and Sfax. In addition, the Colonial School of Agriculture of Tunis, whose documents occupied a panel of the pavilion, trains students experienced in the practice and theory of modern cultures, and their spread on Tunisian soil will bring to the brilliant colony a considerable extension of its industry and trade.

On the light stalls that supported the various products we have listed, came next the wines and brandies.

The climate and the quality of the soil of Tunisia have given an unparalleled place to a branch of the wine industry, that of liqueur wines, muscat wines, and sweet and dry wines. The quality of the grape varieties has led many owners to use the wine products by distillation; branded cognacs and eaux-de-vie can be recognised by their absolute purity. Their moderate price and their capacity to age quickly made them particularly appreciated.

The city of Sfax, which we have already mentioned, centralises the traffic of sponges fished on the coasts and cuttlefish bones deposited by the sea on the whole coastline, in an average quantity of 40,000 kilos per year.

The salt industry, which up to now has been almost non-existent, has developed significantly.

Abundant mining production was synthesised in the limestone, marble, zinc, lead and copper ores and lime phosphates on display in the pavilion. Phosphates, lead ore and especially zinc ore constitute almost the totality of Tunisian exports to Belgium.
Continuing the series of industrial samples, esparto grass is the main focus of attention. This grass grows spontaneously and covers huge areas in the centre and south of the Tunisian Regency. The esparto grass is mainly used by the paper industry, especially in England, which supplies the European market with a very soft paper that is thicker than others of the same weight. Its creamy-white colour and velvety sheen are especially suitable for luxury editions.

Oval prayer mats, cushions, Arabic baskets, fine ropes, small brooms and fans, which were only of museum value, came from the heart of the date palm, split into strips and then woven according to local customs. The spartan ware and enamels were also worth noting for their sumptuousness and richness.

Essences of geraniums, rosemary flowers, myrtle, thyme, lavender, came from the indigenous industry, perfected by modern means. Let us also mention the soaps, the ceramics of Nabeul, the glazed potteries made by the indigenous craftsmen but conforming to less rudimentary models, purer in form and colour.

Finally, the sericulture undertaken recently is going well. It is encouraged, it is true, by the agricultural administration which distributes silkworm cocoons free of charge.

The part of the large room opposite the entrance door, surmounted by a portrait of His Highness the Bey Mohammed-El-Hadi, contained a few selected types of documents relating to the archaeology and architectural and artistic history of Tunisia; while few material souvenirs of Carthage, the homeland of Annibal and Amilcar, have remained, the Roman civilisation, which was once the master of the shores of the Mediterranean, has left many testimonies of its power.

Casts of ancient statues and bas-reliefs, photographs of the Roman amphitheatre of El Djem, of the theatre of Dougga, of the temples of this city and of Sbeitla, of the aqueducts, of the mausoleums, of the mosaics of the villas of Carthage and Oudna, awakened in the admirer the idea of the prosperity that had been attained by the ancient Zeugitance and Bysacene and justified the hopes of the French colonists who had established themselves there. Specimens of Arab architecture, openwork stuccos cut into capricious arabesques, introduced the genius of the Muslim race. On the walls, art photographs; in a showcase, antique or modern jewellery, amateur bindings and specimens of local publications completed this necessarily incomplete summary of this land, from both the archaeological and artistic points of view.

The collaboration of the central administration of the Protectorate and the direction of the services of antiquities and arts made it possible to pursue with great success the research and the inventory of these treasures, precious in information for the present colonization.

The last compartment of the pavilion contained some documents likely to interest the tourist. It was easy to see the location and distance between Belgium and Tunisia, and the means of transport linking them, putting Tunis less than 65 hours from Brussels. A wintering committee set up there is concerned with making the stay of tourists tempted by the softness of an always pure sky, on the edge of the blue waves of the Mediterranean, pleasant.

The painter finds inexhaustible subjects there; the hunter, if he reaches the south, finds emotions worthy of Tartarin; the thermal waters and the climatic stations lend their invigorating virtues to the sick. The simple stroller feels an ever-renewed charm in strolling through the narrow streets, the shady souks of the Arab quarters where weapons, embroidered leathers, saddles, multiform clothes, fabrics in shimmering shades sometimes lamé with gold and silver, carpets from Kairouan or Oudret, blankets from Gassa and Djerba, the jewellery of Mokenine still impregnated with Byzantine methods, all are made and sold in a perpetual animation.

The painted furniture, the chests covered with tortoiseshell and mother-of-pearl were the work of skilful craftsmen still grouped in guilds, with their own rules and hierarchies, piously guarding the traditions of a distant era.

The Exhibition was not yet at its end when the goal pursued by the Colonial Committee of Tunisia seemed to have been achieved.

In fact, the Administration of the Regency had received a number of letters from Belgian traders asking for details in addition to those provided in a rather general way in the pavilion itself.

With commendable eagerness, the Resident General had had each of them answered; so there is no doubt that our relations, already so important with Tunisia, are still increasing for the greater good of our respective interests.