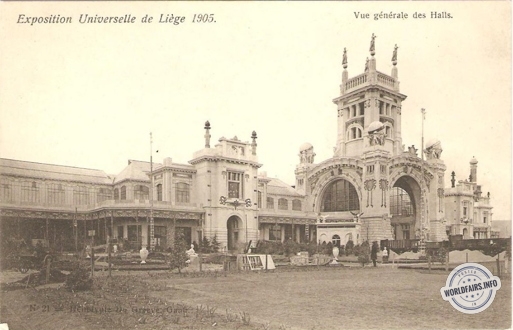 The architectural competition was organised at the end of 1902, following a programme decided by the Technical Committee of the Executive Committee. The competition had two aims.

One was to draw up a project for the main façade of the Vennes halls, which were supposed to be executed according to a provisional plan drawn up by the Technical Committee.

The other was for the construction of a definitive palace on the Cointe plateau. It should be said straight away that despite its value, the winning project in this second competition was not carried out, as the Committee had subsequently decided to build the permanent palace in the Parc de la Boverie, which was to preserve the memory of the Exhibition.

At the end of March 1903, the jury's decisions were known. Only one prize was awarded for the eventual palace in Cointe.

Of the designs submitted for the main façade of the halls, three were awarded prizes: the design by Mr. Michel de Braey, architect from Antwerp, was ranked first, and that of Mr. François Jacob, from Verviers, second.

Each of the winning projects was distinguished by its picturesque and original qualities. The Executive Committee, following the jury, decided to execute Mr. de Braey's project, which involved an expenditure of one hundred and eighty-five thousand francs.

At that time, in accordance with the Technical Committee's forecasts regarding the surface area and the layout of the halls, the façade had a development of one hundred and eighteen metres on the main façade and one hundred and ninety-seven metres on the side façade, i.e. a general development of three hundred and fifteen metres. However, the Director General of Works considered that the main façade should have a much greater development, so as to completely hide the embankment of the Chemin de fer du Nord, and submitted a preliminary project designed in this sense to the Executive Committee, which adopted it unanimously. This resulted in modifications and extensions to Mr. de Braey's project, so that the facade had four hundred and thirty-nine metres of development divided into three hundred and seventy-five metres of main facade and sixty-four metres of side facade.

The number of secondary pavilions flanking the central motif, which had been two in the original project, had been increased to four; these pavilions were all arranged on the
the great width of the façade.

The portico composing the central motif of the façade was formed by a vast entrance arcade, and an upper lantern crowned with statues of Victories. It was fifty-five metres high and thirty metres wide. At the sides of the entrance archway were groups of metal workers and mine workers. At the corners of the façade were pylons on which mascarons represented the Meuse and the Ourthe.

It was Mr de Braey himself who directed the execution of his work.

The construction of the entire facade, in wood and staff on a metal frame, was carried out by the Participation Baume et Marpent and Victor Berteaux et Cie.

The foundation work was started in August 1904; the assembly of the metal part, started on 1^"" October, was completed the following February.

The decorative staffwork and statuary prepared in the workshop were installed in less than two months, so that on the opening day of the Exhibition, the façade of the halls was completely finished.