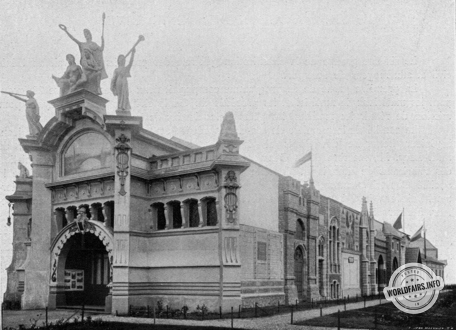 The sixth group of the general classification of goods related to civil engineering and means of transport.

The committee for the first of these classes was composed of: Mr. Cousin, Jean, honorary engineer of the Ponts et Chaussées, contractor, as president; of Messrs. Levy, M., member of the Chamber of Representatives, president of the Association of Cement Manufacturers, and Kraft de la Saulx (the Knight), chief engineer of the Cockerill Company, as vice-presidents; of Mr. Delleur, J. H., burgomaster of Watermael-Boitsfort, engineer, as secretary; Mr. Carton, Léonard, engineer-constructor, in Tournai, as treasurer.

It was this committee that came up with the idea of creating the Pavilion of Civil Engineering, an idea that three of its members, Messrs Cousin, Delleur and Carton, were responsible for pursuing.

The initiative was a good one. At the previous Exhibitions, the class comprising building materials was incomplete and badly organised. The Committee of class 28 sought to group together in Liege most of the country's materials and to put them to use. Its original plan was to create a pavilion built with these materials. Graphics would have shown the technical qualities of these materials; perhaps it would also have been possible to bring together in this pavilion the work of the Belgian vocational schools and thus show the results of this modern education.

In order to give its project a concrete form, the above-mentioned committee had plans drawn up for a pavilion with four façades of different styles and formed in such a way as to present a large number of materials. Unfortunately, this project could not be realised due to the considerable costs involved.

However, a solution was urgently needed. In order to find a solution together, the committee of class 28 met with the committee of class 29. The latter committee was chaired by Mr Debeil, Alphonse, Director General of the Ponts et Chaussées. Mr. Baar, Edmond, President of the Association des Entrepreneurs des Travaux Publics de Liège, and Mr. Monnoyer, Léon, President of the Brussels Chamber of Commerce, were vice-presidents. Mr. Hachez, Fernand, principal engineer of the Ponts et Chaussées, professor at the University of Louvain, acted as secretary-treasurer.

The delegates of the two committees met with the warmest welcome from Count de Smet de Naeyer, Minister of Finance and Public Works. The Honourable Minister undertook to subsidise the new pavilion, which was named the "Pavilion of Civil Engineering" and placed under his patronage.

The members of the committees of classes 28 and 29 designated to be part of the managing committee of the pavilion were, as follows
President: M. Debeil, A.
Vice-Chairman: Mr. Cousin, Jean.
Secretary: Mr. Delleur, J. H.
Member: Mr. Marote, E., principal engineer seconded to the Direction Générale des Ponts et Chaussées.

The latter two accepted the thankless task of carrying out, under the supervision of the steering committee, the very difficult task of grouping all Belgian materials.

It was then that the committee launched a "new appeal to producers of Belgian building materials".

Here is the most significant passage:
"This pavilion will be built by classes 28 and 29 of group VI of the Liège Exhibition.

Class 29 will have a room in which models, plans, photographs, maps, drawings and diagrams, etc., relating to the main public works carried out in Belgium will be displayed.

Class 28 will have an adjoining room where samples of the country's various materials will be grouped together, as far as possible, such as brickwork from Rupel, Brussels, the coast, the Campine, La Plante in Namur, Lobbes, Waterloo, Zandvoorde, Liège, as well as bricks made from coal shale, etc. In addition, there will be worked natural stones (small Devonian limestone granite, stones from the Meuse and Tournai, sandstone, etc.), artificial stones, paving stones of all kinds, lime and cement derivatives, various types of reinforced concrete construction, etc.

To enable the public to appreciate the country's building materials, clear and precise tables will give the most interesting qualities of these materials: resistance to traction, compression, flexion, legivity, and even the average price, as some materials are sought after for their low prices.

M. Roussel, the distinguished principal chemist of the Chemins de fer de l'Etat, was kind enough to provide the elements necessary for the formation of these tables.

Such was the conception and realisation of the new Civil Engineering pavilion project. The location that was assigned to it contributed to delaying its execution somewhat, due to the proximity of the large embankment that supported the temporary access tracks of the goods trains in the Exhibition.

But, apart from this inconvenience, this situation suited it perfectly. Running alongside the Ourthe diversion, easily visible from the Fragnée bridge, this pavilion, in addition to decorating this part of the Exhibition by forming a harmonious continuation of the pavilions on the esplanade, attracted a good number of visitors, whom its appearance charmed.

The central part of this façade, projecting and dominating the lateral wings, was surmounted by a symbolic group balanced on each side by large Renommées. Underneath, a painted tympanum represented the large and luxurious Fragnée bridge, the civil work of art for which the Exhibition was honoured. Then, surmounted by recessed bays with stained glass windows, was the low and wide entrance, rounded at the top.

From a technical point of view, what particularly marked the exterior of the pavilion was the composition of the side façade, facing the Ourthe. It consisted of a series of facades formed from building materials. A happy combination of colours was visible, showing how our materials can be used in the construction of modern houses.

The metal construction of the pavilion was entrusted to V. Berteaux et Cie, in Cureghem lez-Bruxelles.

The interior of the pavilion was divided into two rooms, one of which housed plans and models of public works, the other building materials.

In the first room, the exhibition of the Administration des Ponts et Chaussées stood out. A superb model of the port of Antwerp, with its docks and quays lined with sheds, was particularly noteworthy. The port of Ostend, the port of Ghent and the port of Brussels also offered a magnificent overview of their facilities. Hanging on the walls were a host of photographs, charts and maps, completing the overall picture.

In these documents of various kinds, the activity of our administration of the Ponts et Chaussées was shown.

Antwerp, Ghent, the municipality of Saint-Gilles near Brussels, showed through photographs, maps and graphs, their most recent works in the field of civil engineering and the technical scope of these works.

The construction engineers, Mr. Coiseau Louis and Mr. Cousin Jean, presented a magnificent display of their most recent projects. There was a model of the port of Zeebrugge, reduced caissons, albums containing plans of the works and equipment, photographs, and overall maps of these works at a scale of 1:10,000.

A magnificent relief plan gave an overview of the appearance of the Quenast quarries. Messrs Berteaux, Victor et Cie, in Cureghem-Brussels, exhibited photographs of the various steel construction works they had carried out in Belgium and abroad.

Also on display were models of the pavilion by Mr. Eugène Fichefet, of Brussels, the preliminary design of the Civil Engineering pavilion by Mr. Jolet, architect, of Liège, and the plans for a new bridge system designed by Mr. Arthur Vierendeel, professor at the University of Louvain.

Two exhibitors completed the character of the Public Works Hall. One, Mr. Félix Coosemans, from Brussels, exhibited a plaster reproduction, on a scale of 0m05 per metre, of the brewery of the former Abbey of Villers, according to the plans of the late Mr. Ch. Licot, under the direction of the architect L. Pepermans. The other one,

Mr. Jean Delleur, from Boitsfort, presented a model of a new system of quay walls which attracted the attention of the specialists. He also presented very interesting charts of meticulous experiments on different quay wall systems of his own invention and on normal rectangular walls. The advantages of the new systems could be seen.

The second room contained the building materials. It was an amusing and picturesque mess. The eye could see displays of paving stones, cement barrels, sections of walls, sections of roofs covered with blue slates, grey and red tiles, small plaster pavilions, models of bridges, ceramic tiles of all kinds, and in the midst of all this, signs, photographs, and graphics seemed to be trying to put a bureaucratic order in the middle of this disorder. This one, moreover, was only for the eyes. On the contrary, this room offered, in the materials it contained, the most reliable and rational technical order in these kinds of exhibitions. Some of the materials had been used in such a way as to bring out their technical usefulness.

As announced in the appeal of the Belgian producers, Mr. Roussel, the skilful principal chemist of the Chemins de fer, had had tests carried out on the materials in this room at the Malines test bench. The Annales des Travaux publics
of Belgium published the results. They can only be of interest to specialists.

Such was the quick sketch of the Civil Engineering Pavilion, which its devoted organisers had dreamed of being even more important. There is no doubt, however, that the Belgian materials that it grouped together won many sympathies, due as much to the way in which they were displayed as to their real qualities.