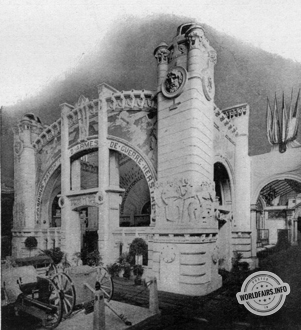 We have said elsewhere the formidable and powerful aspect that this stand presented, with its long guns, its squat howitzers, its field guns, its thick armour plates pierced through by shells, or still keeping these in their flanks with the metal of which they formed a body.

The Fonderie Royale de Canons, of Liège, exhibited firearms, carriages, limbers, platforms, war projectiles and sectioned projectiles to show their inner aspect. This foundry, which makes and repairs firearms and projectiles, as well as gun carriages and other metal objects used in artillery, also has a technical department which deals with all matters relating to the electrical service of fortified works.

Special courses are organised for the training of driver-mechanics-electricians who will be responsible for the electrical installations of the battleship forts.

Each year, a certain number of soldiers from the fortress artillery are trained here to carry out the ordinary work of repairing the equipment.

The Société anonyme John Cockerill, in Seraing, placed its products alongside those of this official establishment. Since 1888, this company has been manufacturing artillery pieces for which, until that date, it had supplied the steel to foreign factories.

Special care is required for the manufacture of this material. Instead of being forged with a sledgehammer, the steel blocks are forged with a hydraulic press developing a force of 2,000 tons. The steel for some parts of the gun is tempered in shafts containing 24,000 litres of peanut oil. The equipment manufactured was tested in a firing range set up for this purpose in the Kempen.

The Cockerill Company grouped in its stand :
A 120m/m howitzer; a 120m/m naval gun; a 120m/m cupola howitzer; a 750m/m long recoil field gun; a 57m/m caponier gun with caponier simulacrum; butchers to protect sappers working in the trenches from firearms; fire-tested armour plates; 150m/m and 75m/m gun closures; and a number of samples of war projectiles and ammunition.

Weapons of war were presented by the Manufacture d'Armes de l'Etat, in Liège, and by some establishments of Liège, in particular by the Fabrique Nationale d'Armes de Guerre, in Herstal near Liège.

This last establishment, whose buildings occupy an area of more than four hectares and which is equipped with an electric driving force of 1,800 HP, has manufactured, since its foundation, in 1889, considerable quantities of rifles and repeating carbines of various calibres of the Mauser system, intended for the Belgian army and several other governments.

Extending its field of action, it has especially applied itself in recent times to the special manufacture of a five-shot automatic shotgun and a seven-shot automatic pistol, Browning system, adopted by the Belgian Army and by foreign armies.

These weapons were displayed in the luxurious stand that the Fabrique Nationale had erected in the compartment of group XIX.

A certain number of arms manufacturers in Liège also engaged in the manufacture of weapons of war such as the Martiny and the Mauser. The Pieper establishments, the Aug. Francotte et Cie company, the Manufacture Liégeoise d'Armes à feu,
Messrs Nagant frères exhibited firearms of this kind.

The materials to load all these weapons are manufactured in special workshops in the country.

The Antwerp School of Pyrotechnics, responsible for the production of ammunition for small arms and firearms, as well as various fireworks used in the artillery, had its stand in this compartment. One saw that a special laboratory is installed there for the examination and the analysis of the raw materials to be used in the various services of the artillery as well as the powders of war coming from the private industry, that theoretical and practical courses on the manufacture of the fireworks, with the use of the non-commissioned officers of artillery are organized there annually, in addition, that a course of physics and chemistry is given to the non-commissioned officers, as well as to the officer candidates.

Manufacturers of explosives not belonging to the Army were also exhibiting there. Among these, we will mention the company E. Ghinijonet et Cie, of Ougrée, the Poudrerie royale Cooppal et Cie, of Wetteren, the Société anonyme des Explosifs de Clermont, in Liège.

It remains to mention, in class 120, the applications of phosphorous bronze to powder tools presented by the Société anonyme des Fonderies et Tréfilerie de Bronze phosphoreux, in Anderlecht lez-Bruxelles; the different types of targets with automatic warning by Lieutenant René Bréwer, of Brussels; the mechanism of a repeating rifle, the rapid-fire pistol, the ammunition launcher for pontoon boats and the navy of Sergeant Major Amand Hanquart, of Mous; the level gantry of Captain Jules Swarts, of Louvain, and finally, the magnificent collection formed by Second Lieutenant Count Robert de Ribeaucourt, of Brussels, a collection including all the weapons and equipment successively in use in the Belgian armies, as well as a series of weapons dating from the First Empire.

The contents of this class consisted, for the most part, of very interesting exhibits organised by the special Military Engineering Companies.

The Compagnie du Chemin de Fer exhibited panels showing the small and large equipment of the track, and the diagram of a circuit, with automatic circuit breaker, for the destruction of trains in motion. This device, devised by Colonel Simonis of the Engineers, consists of two closers placed under the sleepers of the track at a distance equal to the length of the train to be blown up. It is absolutely necessary that two wagons of the train operate the devices at the same time so that the charges placed in the axis of the track explode.

The Compagnie des Pontonniers was represented by loaded haquets and spans of bridge construction.

In the stand of the Compagnie des Télégraphistes were
1° A photo-electric crew, Bréguet system, with remote control and all the equipment of the factory cart and the projector cart;
2° two telegraph and telephone field stations, connected by a short line of field cable;
3° a military telegraph and telephone station;
4° the collection of vibratory apparatus used by the Company;
5° a field micro-telephone set;
6° a talking Morse code set;
7° a telephone set for outpost lines;
8° a collection of the various telephones used by the Company;
9° two Ljungmann microtelephones;
10° a Blackburn portable bridge for resistivity measurements;
11° a differential galvanometer for the search for faults on telegraph lines and for checking the batteries
12° the various devices for optical telegraphy;
13° a range of tools used by the Compagnie de Télégraphistes for the construction of telegraphic and telephone lines in the field.

The Compagnie des aérostiers exhibited a captive suspension of the Renard system, with a fully equipped gondola. Next to it was a compressed gas car, a model of a test bench for testing ropes and fabrics, a typical yellow copper propeller giving, with its 400 revolutions per minute, a pulling force in the direction of its axis of about 80 kilograms. Photographs representing free or captured ascents made by balloon officers completed the exhibition of this company.

Albums showing the construction plans of various army buildings made up the exhibition of the Directorate General of Engineering at the Ministry of War.

Finally, the displays of the Régiment du Génie and the Régiment des Carabiniers included, on the one hand, tool kits, a gantry made up of engineering materials, mine equipment and a breathing apparatus, and on the other hand, bicycles used by the cycling companies and equipment for field repairs.

Class 121 still had some exhibitors. These were Messrs Ghinijonet et Cie, with ammunition from the Engineers; Sergeant Major Amand Hanquart presenting, in reduction, a model of a portable field bridge, signals for railways, an optical telegraphy apparatus, a pocket typewriter, etc.

The most important stand in this class was that of the Compagnie des Torpilleurs et Artificiers, where electrical firing, diving and submarine defence equipment were displayed. The curiosity of the public was especially attracted by a Whitehead torpedo model 1890, with a diameter of 38 centimetres and a length of 5 metres 75. It consists of a steel tube in the shape of a very long cigar. The charge of fulmi-cotton is contained in the front point; at the back, there is compressed air at 90 atmospheres whose force, regularly distended, actuates a propeller which governs the torpedo. The body of the torpedo still contains a charge of cotton powder.

Next to the torpedo was a set of underwater mining equipment, including a spherical steel container for an electrically powered mine capable of holding 100 pounds of explosives. A Mathieson circuit breaker, a special anchor to hold this device in place, a warning and firing device, and a complete diving device were also on display by the Torpedo Boat Company.

Various models of watertight containers for explosive charges and an assortment of devices for electrically fired mines made up the exhibition of the Artificer Company.

Among the exhibitors in class 122 were the explosives factory Ghinijonet et Cie, from Ougrée, the Société Royale des Sauveteurs de Belgique, Sergeant Major Amand Hanquart, from Mons. The latter presented a model of a lifeboat.

The exhibition of the Military Cartographic Institute of the Ministry of War particularly highlighted this class.

Alongside these maps were some of the engraved plates used to draw them.

A few scientific works and a few documents of very different kinds enhanced the appeal of class 123. The technical works of the artillery captain Auguste Collon, the book "Les Grenadiers" by second lieutenant Dehaene were remarkable.

The Ecole des Cadets de Namur, a school reserved for non-commissioned officers, was represented by photographic views of the establishments and by various documents, including mannequins dressed in the cadets' uniform. Tables and documents relating to teaching and various services constituted the participation in this class of the Ecole des Pupilles de l'Armée in Aalst and the Ecole normale de Gymnastique et d'Escrime in Etterbeek.

The programme of this class was restricted to objects capable of being put before the public eye, objects forming only a small part of the complicated administrative services of the army.

The Minister of War exhibited a non-commissioned officer's bed and a camp bed, a batch of canned goods, various containers, etc.

The farriery courses of the Riding School in Ypres were represented by the main fitting systems taught at the school.

In the same category, the farrier François Cambier, in Bruges, had assembled a fine collection of horseshoes.

Among the new types of objects, admitted by the administrative services of the army or whose use is proposed, we will quote a trumpet for the cavalry imagined by the Ghent music director Théophile Coutelier; the inexplosive Liège stoves of M. François Gayet, master gunsmith in Liers; the skates facilitating the march, of sergeant major Amand Hanquart; the removable harbour-bag, the water-bag of captain Camille Lalieu and of the master-worker sergeant Charles Van der Vliet, in Bruges; a system of carrying the rifle for the cavalry and a system of automatic bars of stables of marshal of the logis Cyrille Van Zandycke, in Beveren-Waes.

This class was represented by few exhibitors. After the reduced models of an ambulance and a stretcher, exhibited by Sergeant Major Amand Hanquart and the apparatus for filtering contaminated water of Mr. Thomas Neuray, in Liège, it remained to examine only the stands of the Belgian Red Cross and the Army Health Service.

The Red Cross, that admirable international society which deals with the care of the wounded on the battlefield, was represented by a hospital barrack, a car for the medical-surgical service, two ambulance cars, one of the Mullier system, the other of the Lohner system, a stretcher on single wheels, an ambulance bag, a first aid box, an amputation and resection box, and a field kit.