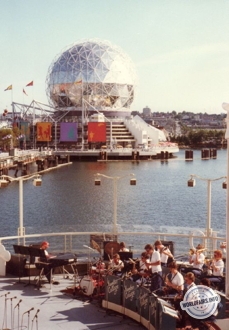 If Paris inherited the Eiffel Tower following the 1899 International Exhibition, Vancouver will inherit the Expo Centre. By day, the metal sphere reflects the waters of False Creek, and by night, it sparkles with light.

At the heart of the Expo Centre is a 500-seat cinema with a giant OMNIMAX® screen. The images projected on this hemispherical screen, the only one of its kind in Canada, are nine times larger than those of a normal film.

Created especially for EXPO 86, A World in Freedom evokes various moments in the history of transportation, from the Roman road to the American space shuttle. Award-winning Canadian director Michel Brault and his crew spent nine months filming in various parts of the world, from the far north to the Mojave Desert, to produce this remarkable film.

The Avenirs Theatre offers visitors the opportunity to participate in Canada's first audio-visual presentation. A computerized screen offers a choice of futures to visitors who express their preference by pressing a button on their seat. The results, compiled by computer, appear immediately on the screen.

The exhibition Objectif An 2000 is dedicated to futuristic technology, with wind-powered vehicles, holograms, space equipment and more.
Have a bite to eat and a refreshing drink on the marine terrace of the Horizons restaurant or take a look at the souvenir shop in the Expo Centre.

The impressive Expo Centre symbolises the Earth with its spherical shape, a shape that has often been adopted by International Expos.

A hanging sculpture by Canadian artist Michael Hayden embellishes the Expo Centre's sphere with fluorescent lights.
At its feet, a model of the EXP0 86 site allows visitors to orient themselves.


A TASTE OF THE EXHIBITION

In 1985, over half a million people got a taste of EXPO 86. The Expo Centre opened its doors on 2 May 1985 at a grand gala, one year to the day before the official opening of the Exhibition.

The early opening of the Expo Centre was one of the key elements of an international marketing campaign. This initiative really put EXPO 86 to the test. Staff were hired, uniforms were made, tickets were printed, shows were set up, menus were composed, and restaurants were set up. Finally, everything was ready for 2 May 1985.

The North American and European media were present at the opening and realized the magnitude of the undertaking, as everything was done to capture their attention and, by extension, that of the world.

Representatives of the tourism industry, tourists, transportation specialists, diplomats, Exhibition participants and British Columbians were able to glimpse the promise of an Exhibition of international stature.

At the Folklore Square, inaugurated last summer, visitors came in great numbers to enjoy the shows and the sun. Located near the Expo Centre, this cedar wood enclave was the scene of a ten-day festival of music, dance, gastronomy, arts and crafts.

The numbers prove that opening the Expo Centre for five and a half months was the best kind of advertising.

When it closed on 14 October, after five and a half months of activity, the number of visitors had doubled the forecast of 300,000. This proved to be a major success for EXPO 86, and one that received rave reviews from observers.