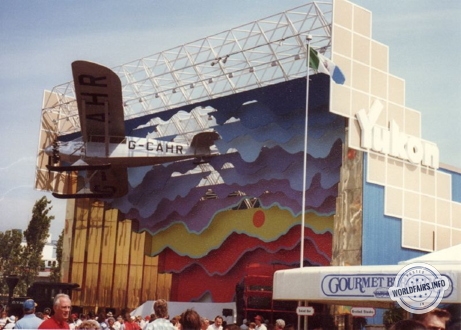 The entrance to the Yukon pavilion is an open-air theatre with a relief northern sky backdrop created by Ted Harrison using mirrored panels to reflect the magical light of the midnight sun. Hucksters and entertainers perform at the entrance, which is reminiscent of the Klondike Gold Rush in all its exhibits.

The replica of the Queen of the Yukon bush plane, similar to Lindbergh's Spirit of St. Louis, symbolizes the role of the aeroplane in the exploration of the Far North.

Also shown is the small 0-4-0T steam locomotive, which at the turn of the century carried the coal needed to operate the dredges used for gold prospecting.

An archway with a giant paddle wheel invites passers-by to discover the magic of the Yukon.

Inside the pavilion, the famous gold rush of 1898, the most famous episode in the history of Yukon transportation, is illustrated by the stories of the prospectors, who all dreamed of finding a good vein.

Other history is also presented, such as the construction of the Alaska Highway and the only public road in North America to reach the Arctic coast.

Out of Silence, the main audio-visual attraction, depicts, with 18 projectors, the history and life of the Yukon and the natural beauty of the snowy peaks and wilderness of Kluane National Park through which the Dempster Highway passes. The film, shown in a 150-seat theatre, uses a variety of techniques: fast action, multiple images, animation, macro photography and an excellent soundtrack.

The multi-cultural dimension of the Yukon is reflected in an exhibition of Indian art and other artifacts found at Old Crow, the oldest settlement in North America. Traditional and modern dog sleds and a brand new sled for cross-country running are also on display.