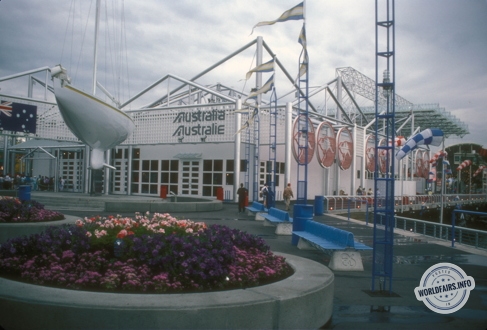 In Australia, large distances and a small inland population have always been barriers to transport and communication.
Australia has an area of 7 682 000 square kilometres, about three-quarters the size of Canada. From east to west and north to south, the country covers a distance of more than 3,000 kilometres. Yet more than 60 per cent of the 15.6 million inhabitants live in or near the capitals of the six states.

This makes transport and communication difficult and expensive, and requires fast and safe services.

Australia's postal, telegraph and telephone systems were established in the 19th century. Today, the communications network covers all but the most remote villages. In 1986, the satellite communications system came into operation, sending high-quality communications, radio and television signals to remote areas.

A large reproduction of the America's Cup winner Australia 2 in the Australian pavilion evokes the exhilaration of sport and the joy of recreational transport.

Visitors to the pavilion are introduced to the lifestyle and attractions of the country through exhibits that encourage them to discover Australia for themselves.