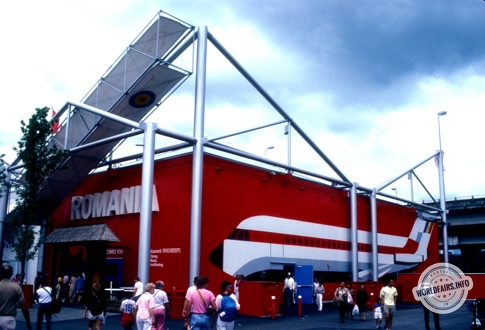 The Romanian pavilion reflects the country's historical role in the development of trade routes from the east to northern and central Europe. From the Black Sea, ships travelled along the Danube to eight European countries, following the Viking tradition.

Romania manufactures most of its locomotives, electric motors and transformers. It also builds agricultural machinery, tractors and trucks, as well as ships, aircraft and helicopters.

The inauguration in 1984 of a 64-kilometre canal linking the Danube to the Black Sea represents a milestone in modern Romania. The canal shortens the route to Central Europe by 400 kilometres and protects the ecology of the Danube delta, where agriculture, fishing and tourism are flourishing.

This country in south-eastern Europe with its abundant natural resources has developed an industrial economy.

The Romanian people have Latin origins but their language and culture have been influenced by Slavic and German elements.