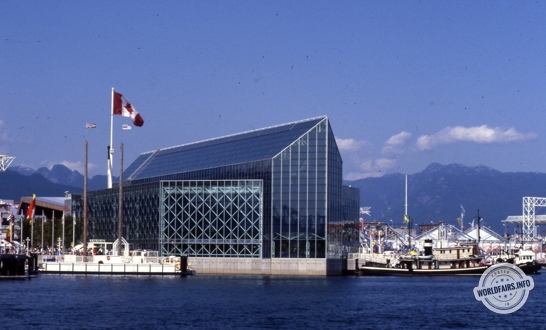 Located to the west of the Red Zone, the Blue Zone offers visitors an exciting array of activities. The centre of night-time entertainment on the site, this zone invites night owls to come and experience Expo by night.

Every night, the biggest stars of the entertainment world appear on the bill. In False Creek, in front of the "Place des Noctambules", superb fireworks, launched from barges, inaugurate the late night activities.

The Stadium Gate, one of the four gates of Expo, opens onto the Place des Nations, overlooked by the British Columbia pavilion. In the square, Expo Ernie welcomes visitors. Outside the Stadium Gate is the B.C. Place Stadium where the Opening Ceremony took place on May 2. Various trade shows and exhibitions are also held here.

The B.C. Pavilion is the focal point of the Blue Zone and is already part of the B.C. heritage.

The Challenge B.C. and Showcase B.C. buildings of the BC Pavilion flank the Place des Nations. Theatre, musicals, food, dance and cabaret are the late night menu at Showcase B.C.

The nerve centre of Expo, these two buildings house the offices of the Commissioner General, the President and the Operations and Entertainment Division. In addition, the International Media Centre in the Challenge B.C. building provides comprehensive facilities for the many journalists.

Discovery B.C. is the third building in the host province pavilion and is an imposing glass and steel structure. Along its front, boats from the British Columbia coast are moored.

The multicoloured flags of the participating countries adorn the perimeter of the Place des Nations, where concerts and fairground shows take place. National and special days honour the participants, and regional BC Weeks highlight the culture of the province.

The Monorail runs over the square and stops at the Stadium Gate Station.

Near the water, the Philadelphia Toboggan Company's Carousel is one of five rides at EXP0 86. Built in 1907, it offers a nostalgic ride on its old carved wooden horses.

The British Columbia Pavilion is located on a 4.5 hectare site near the Stadium Gate, south of B.C. Place Stadium.

Designed by Vancouver-based Waisman Dewan Grout Carter, the three-building complex forms the boundary of Nations Square, with a covered enclosure that can accommodate some 5,000 people for major ceremonies. In the buildings, displays covering an area of 6000 square metres depict the unique character of British Columbia.

To the west of Place des Nations is the Challenge B.C. Building, dedicated to the province's industry. To the east, the Discovery B.C. Building highlights the innovative spirit of British Columbians who have become creators of cutting-edge technology. To the north, the Showcase B.C. building offers entertainment. Nearby, on the waterfront, an exhibition and performances showcase British Columbia's rich maritime heritage.


A JOURNEY OF DISCOVERY

The largest building, Discovery B.C., houses four main exhibits. One of these, called Trees of Discovery, located in the main hall, consists of four lift towers that take visitors on a journey of discovery of British Columbia's innovations.

One of the lifts is actually a diving simulator that shows the achievements of the provincial underwater equipment industry. Another features satellite communications.

The Discovery B.C. building is reached by a forest trail that leads from the Place des Nations, through Douglas fir trees and along fish-bearing streams. The province's natural environment has also invaded the pavilion, which features natural lighting, wood carvings and native plants.

At the Showscan cinema, a film tells the story of a little girl who finds a magic sphere on the beach. Together they take a wonderful journey to the four corners of British Columbia. You won't want to miss this family show.

The cinematic process captivates the audience with the most stunning imagery. A giant screen and state-of-the-art sound system showcase the splendour of British Columbia's landscape like never before.

Visitors learn about the diverse cultures and geography of British Columbia through B.C. Magazine, an exhibit located beneath the theatre. Nine landscapes form the backdrop for this show in which an ambulance troupe recreates scenes from the past in a series of tableaux.

Feast in the 250-seat restaurant at the east end of the main hall, which offers the finest in seafood, ranch and garden produce. After a fine meal, the ground floor gift shop awaits you with its unique selection of BC posters, souvenir books and art.


THE WORLD OF THE SEA

Stroll along the East Promenade of the Discovery B.C. building and enjoy a beautiful view of the EXPO 86 site and False Creek, and admire the ships and marine display nearby at the East Wharf. You'll be able to board the Ivanhoe, the flagship of the BC pavilion.

Across the street from the Place des Nations is Challenge B.C.. Electronic wonders, along with sculptures, murals and mobiles, introduce you to British Columbia's industries and workers. Humour, surprises and fun round out the warm welcome from the host province.

This is followed by a 14-minute film presented on a triple screen. Entitled There's Room For Me, the film depicts the lifestyles and dreams of workers in the raw materials industry in British Columbia. Presented on three screens at once, this multiple image arrangement will delight the audience.

Upon exiting the Challenge B.C. building, a short walk will take you to the West Forest. This tree-lined area invites visitors to relax and unwind, but it also offers many interesting discoveries, including the famous BC totem poles.

Whether coming alone or in a group, business leaders can learn about trade, industry and investment opportunities at the Business Information Centre.

At the Centre, friendly staff provide information on the BC economy, arrange tours of the pavilion and help visitors get started. These staff members help visitors connect with one of the participating companies if they wish.

The B.C. Pavilion's premier talent showcase is presented daily throughout the site. The program includes music, dance, skits and lumberjack competitions. Check the schedule at the information booth in Place des Nations.

Amateur performances are an important part of the programme. They are held every afternoon on the two stages in the Discovery B. C. building, the 200-seat Bandshell near the Promenade East and at Place des Nations.

As night falls, the top professional artists take to the stage. Their On the Plaza Program takes place during the first week of May and in July and August.

The evening shows are grouped as follows:
Tuesday - classical music
Wednesday - fashion shows and dance
Thursday - jazz
Friday - country and western music
Saturday - popular music
In addition, every Sunday afternoon there are children's shows for the whole family to enjoy.

The world's largest gold coin, minted to commemorate EXPO 86, is worth over $1 million. It is part of a special numismatic exhibition at the Place des Nations.

Thematic posters and a collection of ancient and modern coins show the importance of money and gold.

When night falls, EXPO 86 starts to vibrate with new activity. Every evening, lasers and fireworks mark the closing of the pavilions and the beginning of the nightlife.

At night, the Blue Zone is a delight for entertainment fans. In this, Canada's largest entertainment centre, three whimsically decorated cabarets illustrate the theme of transportation.

At the Flying Club, for example, you can dine on the wing of an aeroplane. In an intimate setting, this cabaret presents the most daring variety artists to fans of novelty. Jugglers, mimes, ventriloquists and comedians entertain the whole family during the day.

In the evening, the restaurant-theatre allows the satirical troupe Second City to perform from Tuesday to Sunday throughout the Exhibition. On Monday night, a Vancouver-based troupe presents a hilarious parody of a 1950s sitcom and the audience is invited to join in.

In the late evening, the most amazing variety artists such as comedian Valri Bromfield, Newfoundland's Codco comedy troupe and the Melloyds, a cappella singers, perform at the Flying Club starting at 11:00 pm. Be prepared, anything can happen!

Waves, the second cabaret, presents a non-stop musical programme in a cruise atmosphere. In the afternoon, the music is light and gentle. At dinner time, the music is tinged with rhythm and blues. The evening ends with the best rock bands and dancing on a plexiglass floor with fish swimming underneath. Full meals and a guaranteed atmosphere until one in the morning.

The third cabaret, 86 Street, which can accommodate 700 merrymakers, recreates the atmosphere of the 50s and 60s. The menu includes burgers, milkshakes and bananas, and family entertainment during the day.

In the evening, the fever rises! Let yourself be swept away by the city's hottest rock beats!

For those who can't get enough, there are two places that offer light meals to end the evening: an Irish pub where you can hear the Irish Rovers and a Mexican restaurant with a mariachi band. The best musicians and street entertainers from around the world keep the Blue Zone alive until the last visitor leaves.

The B.C. Place complex was born out of a long-term project to redevelop the former industrial area on the banks of False Creek in downtown Vancouver. The land occupied by EXPO 86 is owned by B.C. Place Corporation. The 1986 International Exposition will be dismantled after it closes on October 13 to make way for residential developments, marinas, parks and shops.

The 60,000-seat stadium requires minimal artificial lighting, thanks to its translucent roof supported by air jets.
The stadium has a huge exhibition area covering over 23,000 square metres. Events at the stadium during Expo include the Opening Ceremony (May 2), the International Vintage Car Show (July 7-9) and the International Exhibition on Communications and Computers (September 9-11).

Every evening after 10 p.m., the EXPO 86 sky will be ablaze with the World's Fireworks, which will rival each other in wonder, colour and creativity and offer a festival like no other.

Original music composed by Vancouver's Koko Productions will accompany this fireworks and laser show. The lasers will be projected into the sky from the BC Pavilion and Expo Centre in figures that reflect the theme of EXPO 86.

The fireworks, donated by countries around the world, explode all over False Creek's waterfront and in the air, to the delight of visitors who can watch them from anywhere on the site!