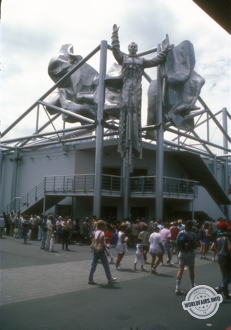 On 12 April 1961, cosmonaut Yuri Gagarin became the first man to fly in space, aboard the Vostok spacecraft. The U.S.S.R. pavilion illustrates the theme "Transport and Communications for Peace and Cooperation".

The pavilion reflects the many space achievements of the USSR.

A statue of Yuri Gagarin commemorates his historic flight in 1961.

Inside, visitors enter the vastness of the cosmos. Under the title "The Cosmos in the Service of Peace and Cooperation", one can admire the Soyuz-Salyut-Progress, a 33-metre orbiting unit which contains a working space laboratory.

Other exhibits deal with the theme of space: Vega, an international project established on the occasion of the passage of Halley's comet, the worldwide satellite relay system used to assist in rescue operations at sea.

Visitors can linger over an electronic map of the USSR's transport and communications systems. The northern part of the country is the subject of studies illustrating the unloading of the largest nuclear icebreaker, the modern transport systems that serve the thousand-year-old city of Kiev and the first non-stop flight over the North Pole from the USSR to North America in 1937.
Folk dances, fashion shows and films (in 70mm and 3D) show the variety of cultures in this country of 277 million people, representing 100 ethnic groups.

An excellent restaurant with a terrace showcases the talent of the great Soviet cooks.