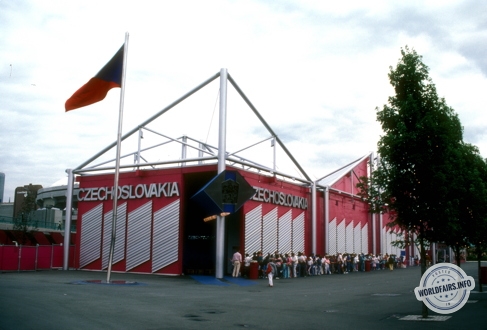 Czechoslovakia, a country with a population of 15.2 million, is 65 percent Czech and 35 percent Slovak. These two ethnic groups are characterised by their different languages, cultures and literature.

The Czechoslovakia pavilion at Expo 67 in Montreal and at the 1958 World and International Exhibition in Brussels was unique and the country continues this tradition.

The pavilion houses priceless historical objects. Many of them have never been exhibited outside Czechoslovakia, such as the celestial globe made by Tycho Brahe in the 16th century and the Tabulae Rudolphinae published by Johannes Kepler in 1627.

Thanks to new audiovisual techniques, the audience is projected into a film that takes them on a whimsical flight to Czechoslovakia. In the pavilion's restaurant, whose hot-air balloon décor evokes the end of the last century, visitors can enjoy Czech and Slovak specialities.

The Czechoslovak company SKODAEXPORT is one of the world's leading exporters of electric locomotives and trolleybuses.