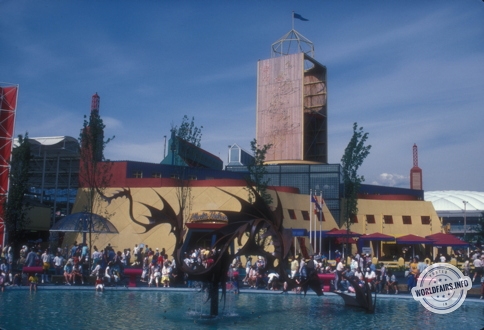 In the square, the visitor discovers the picturesque and varied personality of Alberta. The pavilion's southern façade depicts a typical urban landscape and the northern façade the tranquil charm of its countryside.

The colours of the pavilion reflect the province of Alberta with its golden wheat, red earth, blue skies, lakes and rivers, and snow-capped mountains.

Inside, thanks to a 20-minute audio-visual collage, the visitor discovers the past and the future. The history of transportation is reflected in the history of a pioneering people who conquered the vastness of a new land and the challenge of an untouched wilderness, and today are leaders in oil exploration, agricultural research and laser technology.

On the first floor, a first-class restaurant allows you to enjoy a variety of cuisines with European origins but typically Alberta ingredients, such as meats, fish, cheeses and grains.