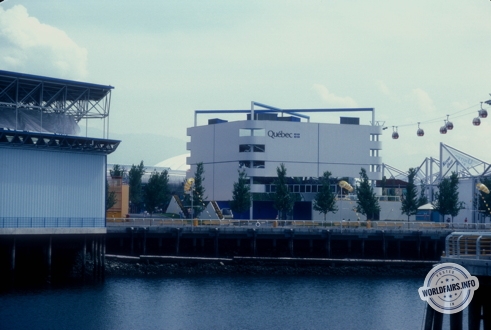 Behind its imposing contemporary architecture, the Quebec pavilion offers visitors a universe of sounds and images. Lights, fountains, models and a film projected on a 360-degree screen depict Quebec.

Visitors watch the audio-visual presentation while standing on an island surrounded by water. The waterfalls, whose image appears on the circular screen, symbolize the historical and cultural importance of water to Quebec.

The province of Quebec covers an area of 1,356,273 square kilometres, most of which is almost uninhabited, with the majority of the population concentrated in modern cities along the banks of the St. Lawrence River.

Quebec's contributions to transportation and communications reflect the creativity and ingenuity of the people who have inhabited it for nearly four centuries. Snowmobiles, a sophisticated underground transportation system, forest fire tankers, French-language software, polymer batteries and fibre optics are just some of Quebec's most recent achievements.