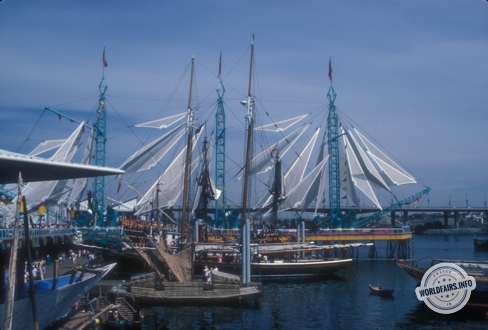 The romanticism of sea travel and the ingenuity of the world's shipbuilders are expressed in the Marine Plaza. The Vaisseau du Rêve has 40-metre high masts which dominate the whole site. The Ship of Dreams is actually a pier with a great view of False Creek. It also serves as the Navy Gateway, from which visitors embark on boat tours or travel around Stanley Park to the Canada Pavilion in Burrard Cove.

The International Port is at the heart of Marine Plaza. Merchant ships, tugs and pirogues from all over the world will drop anchor alongside a Chinese junk, an Arab dhow and Peruvian reed boats. Nearby are some famous ships, including Humphrey Bogart's African Queen and a replica of Sir Francis Drake's 17th-century galleon, the Golden Hinde, the S.S. Master steam tug, representing British Columbia's coastal ships, and a 16-metre haida war canoe carved from red cedar from the Queen Charlotte Islands in British Columbia.

Daily boat building events include an Indonesian pinisi and a traditional York-style Alberta boat.
An old Sea Serpent with rusty vertebrae emerges from the wake of the Ship of Dreams and leads visitors to the Signal Tower, which houses sirens, traffic lights, radar screens and semaphores that visitors can operate. Nearby, remote-controlled miniature boats ply a large basin.