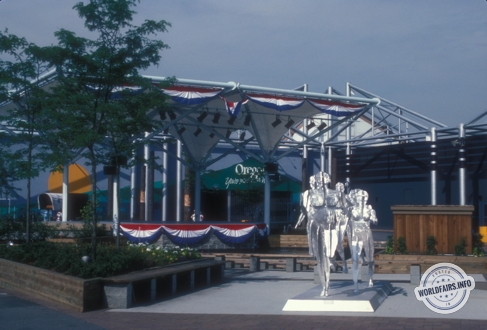 The architecturally advanced Oregon Pavilion features a walkway that passes behind a waterfall and leads into a tunnel that is constructed like a 21st century covered wagon. The trick-filled tunnel uses optical illusions and special lighting effects to take visitors on a fantastical journey through time to Oregon's past, present and future. Throughout the tunnel, relief sets recreate Oregon's mountains, rivers and harbours.

Artists and actors will perform in the Gallery Theatre. A tourist and business information booth in the centre of the pavilion allows visitors to learn more about the state of Oregon, which so warmly welcomes its tourists.

Since the days when Oregon was first connected to the rest of the United States by Lewis and Clark and the famous Oregon Trail, transportation has played a major role in its development and economy, such as water transportation. Today, Oregon has more than 20 port areas, including Portland, the state's largest city, which is the largest port by tonnage on the West Coast.