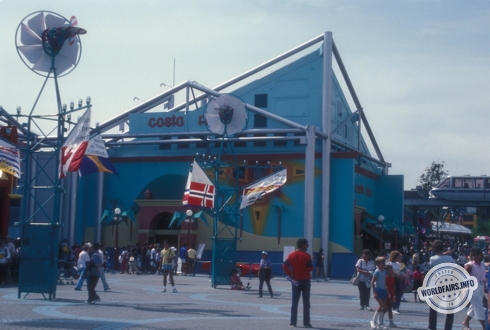 The diversity of the landscape with its volcanoes, coffee and banana plantations, and hot jungle is reflected in the Costa Rican pavilion.

The Northern Railway was built to transport coffee crops from the mountains to the port. Its construction required 19 years of hard and dangerous work through the passes and then the jungle swamps.

Costa Rica, in Spanish "rich coast", exported coffee, bananas, sugar and cocoa and began to exploit its natural resources with the construction of a hydroelectric power station. Geothermal installations were also built, oil exploration was carried out and a new fuel was developed from sugar cane and bananas.

The favourable climate, reasonable wages and tax benefits attract many industrialists to Costa Rica. The Ram Aircraft Company, for example, will soon begin production of an ultra-light aircraft made entirely of aluminium that will be sold worldwide.