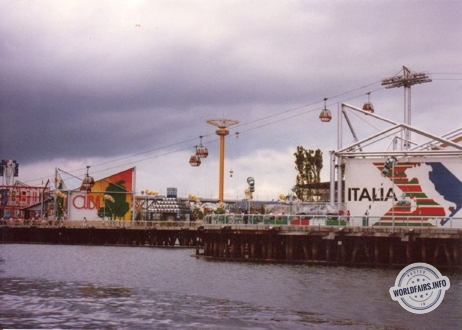 The Green Zone allows you to explore the Atlantic coastline, visit some European countries and experience the exotic atmosphere of distant lands.
At the eastern end of this zone is the Alberta pavilion, right next to the Air Canada pavilion and the Air Canada cable car (west), which will take you to the Yellow Zone.

Follow the Rusty Vertebrae Sea Serpent to Navy Square where a new ship from a distant port has probably just dropped anchor. The Marine Gate is where you embark for boat trips or to the Canadian pavilion.

Take in the Atlantic air at the pavilions of Prince Edward Island and Nova Scotia, two of Canada's Maritime Provinces.
Then head to the Costa Rica and Barbados pavilions. A quick trip to Asia brings you to the Hong Kong pavilion.

The pavilions lining Europe Square offer a whirlwind tour of Europe and the international organisations: the Federal Republic of Germany, France, Great Britain, Italy, Belgium, Spain, the European Community and the United Nations await you, not far from the pavilions of the People's Republic of Hungary and Norway.

At the Monorail station at the West Gate, you can board one of the cars of the French transport system Soulé SK, which will take you via the Place de l'Europe to the French pavilion.

The Quebec pavilion is located near the Monorail station. Not far from there, the Rotunda, the only building on the site that existed before the Exhibition, awaits you.

The Holography Gallery and the Locomotive People #4 sculpture are striking examples of modern art.

The Canadian Pacific Pavilion, also in the Green Zone, is located near where CPR trains arrived on the West Coast a century ago.