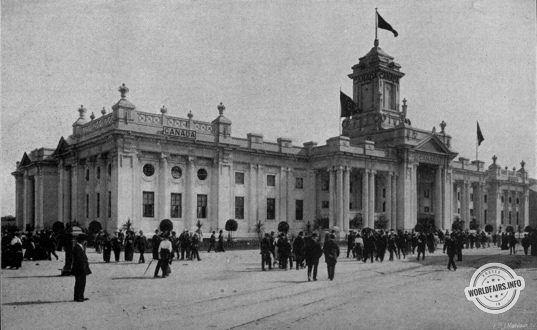 While the Argentine exhibition was addressed primarily to the scholar, the Canadian participation was designed to strike the public mind. It was an effective demonstration that Canada is indeed in every respect, by the abundance of its natural wealth, by the fertility of its soil, by the excellence of its climate, by the multiplicity of its resources, a marvellous country, the true Eden dreamed of by emigrants. To this end, the Commissioner General, Mr. Hutchinson, a master in the field, and his collaborators very skilfully used the most practical means, calling upon the assistance of science and art to help them accomplish their task.

A vast palace, covering an area of fifty thousand square feet, a mixture of renaissance and Greco-Modern architecture, was dominated by a majestic 40-metre dome surmounting a very artistic central portico. The many sections inside spoke to the eye; animated dioramas in which electricity played its magical role, decorative friezes, reliefs, installations in which real and natural products, not samples, were displayed, arranged with method and taste, made the beauty and goodness of the fruits of the orchards, the abundance of the products of agriculture and the perfection of the tools used, known to the public without effort, the existence of immense forests containing an innumerable fauna, the variety of ores and precious metals extracted from its mines, as well as the importance of the waters, lakes and rivers which contain the most beautiful species of fish, and which, criss-crossed by numerous steamers, are a powerful aid to the success of many operations.

The Canadian Exhibition was therefore both useful to the country it showcased and instructive to the visitor. In the central hall, showcases contained specimens of the country's minerals; all around were galleries displaying the seductiveness of its dioramas and the richness of its agricultural products: superb fruit, huge apples, shiny as if they were varnished, pears admirable in appearance, peaches, cherries, grapes, as fresh as if they had been picked the day before, all presented in elegant baskets, placed on an artificial lawn.

Canada proved the fertility of its soil by its specimens of wheat, oats, barley, buckwheat, rye, corn. There were also seeds of all kinds, preserved vegetables and fruits, maple syrup and honey. Following them were the latest farming implements used in the country, which we were told were available to the settler.

But the attention of the visitors was captured by a great diorama of agricultural life in western Canada. This region was, as we know, the most fertile in miracles; where a few years before there was only uncultivated land, there are now immense fields of wheat bordered by settlers' houses. All this agricultural life was depicted in this diorama, the attraction of which was completed by a tiny railway, on which trains ran. Sometimes the train carried the precious wheat grain in its cars east to the town of Connaugh, where the hoovers collected it on arrival; sometimes it brought back from the manufacturing regions the goods required by the farmers.

No less captivating was the display of the products of the forests, hunting and fishing. A significant part of the Canadian territory is covered by forests rich in various species. They offer almost inexhaustible resources for woodworking, construction and pulp and paper production.

If Canada is the land of immense forests, it is also the land of great rivers, abundant in fish, and the land of cold regions, rich in fur-bearing animals. The native fauna section included many of these animals. The brown and black bears, the grizzly and polar bears, and the sea otters were among them. Alongside them were beautifully naturalised specimens, worthy of making the most demanding Nemrods dream: elk, bison, musk ox, caribou, deer, antelope and above all the elk, a superb animal with highly developed antlers.

A large diorama of the part of the country between the great lakes and the Pacific coast showed the great prairies of the west with their immense herds and the parks where horses are bred, the wheat fields of the northwest and the lush orchards of the Okanagan.

In the mining section, a remarkable diorama depicted a cave where native ores accumulated in their natural state. In the background, in the icy solitude, pink, red and blue flames fanned out, showing the magical effect of an aurora borealis. In the foreground, a large quantity of asbestos was spread. And the audience learned about the incombustibility of this product by seeing a mannequin dressed in asbestos remain intact, even though it was surrounded by flames gushing, bright and furious, from an open crevice in the ground.

A second diorama dealt with the cobalt region, also rich in silver ore. Discovered a decade ago, the precious metal has contributed to the creation and ever-increasing prosperity of a city that has been given the name Cobalt. By means of electric light of varying intensity, the three eras of the city's history, i.e. the site before its foundation, the first houses built, and finally life as it was at that time, appeared and disappeared on a large canvas, to the great amazement of visitors.

Near the Canada Palace, between the cozy Monaco Pavilion and Brussels Avenue, the Canadian Pacific Railway had built a superb birchwood "cabin lodge". Here, visitors were treated to film shows depicting Canadian landscapes and aspects of the agricultural, mining and industrial regions.