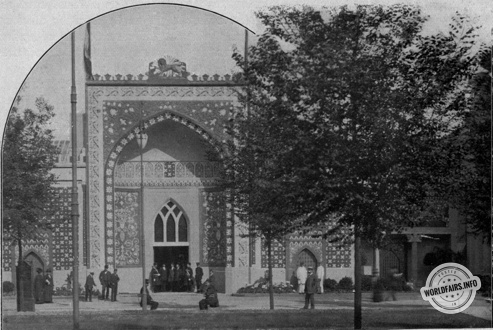 The initiative for Persian participation was taken by Mr. Louis Coetermans, Consul General of the Persian Empire in Belgium. He obtained without hesitation the approval and the most emphatic support of His Excellency Mammouhd Khan, Minister Plenipotentiary of His Majesty the Shah to the King of the Belgians. The Minister of Foreign Affairs in Tehran, His Excellency Vossough-ed-Dvoleh, a friend of Belgium, gave his patronage without hesitation. Mr. Georges Van Oost, industrialist and consul of Persia in Ghent, joined his efforts to those of Mr. Coetermans; an organising committee was set up; it was composed of His Excellency Vossough-ed-Dvoleh and His Excellency Mammouhd Khan, honorary presidents; L. Coetermans, president; G. Van Oost, general commissioner; Paul Dautricourt, general secretary and Ferd. Nève, secretary. For the technical part of the project, they enlisted the help of the architect Van de Voorde and two well-known Ghent painters, the Cornélis brothers.

A patronage committee was set up, comprising numerous notabilities from Persia, Belgium and France.

The organisers agreed on a programme that could be summarised as follows:
"Persia is a great country that is too little known in Belgium, although its resources and wealth make it a powerful interest and it could constitute a vast field of action for their industrial and commercial activity. This would be all the more easy, as the Belgians are highly esteemed in Persia where they enjoy great confidence: it is indeed Belgians who occupy the highest positions in most of the ministerial administrations, finance, customs and postal services; the services they render there have acquired serious sympathy for our country.

On the other hand, the Persian is intelligent, of a gentle, pleasant and sociable character; it is industrious and commercial.

We may add that Persia delivers annually for export enormous sums of manufactured goods and products of the soil, which she receives from abroad from manufacturers of all kinds for even greater sums.
Now, the market is in the hands of the Germans; let the Belgians take an interest in Persia, let them establish trading posts there, let them send agents there and they will soon find, for their export trade, important outlets, thus making their neighbours across the Rhine, the most formidable competition. "

The organisers were able to put this thesis into practice. They decided that the Persian section would not be installed, as at previous exhibitions, in a portion of the halls, but that it would have its own palace, where it alone would be master. To this end, they had a pretty pavilion built on the Avenue des Nations between the Palais International des Beaux-Arts and the Palais de l'Architecture, of which the architect Van de Voorde and the painters Cornélis created a little marvel that attracted visitors and kept them there for a long time.

On the outside, the oriental-style facade attracted attention and flattered the eyes with its many polychrome colours. Inside, an entrance hall, at the top of which was a decorative frieze representing the archers of Darius, was separated from the neighbouring halls by colonnades reminiscent of those of the palace of Darius; at the back of the palace, arranged in such a way as to strike the public on its arrival, was a reception room of the purest national taste and a magnificent diorama representing the ancient and picturesque city of Tehran.

Compartments reserved for exhibition stands indicated that Persia produces dates, grapes, almonds, wheat, rose essences, tobacco, cotton in abundance, and that these forests can provide a large quantity of sought-after and first-class wood. Persians are manufacturers; they make fabrics, highly appreciated carpets, earthenware and charming, original and artistic porcelain; they work metals and leather with skill and talent.

A stand was reserved for documentation: there were numerous brochures, as well as detailed tables on the import and export of Persian trade.

We cannot dwell on this subject, but we must insist that our compatriots take advantage of the information given to them by the organisers of the Persian section, to whom we are pleased to offer our warm and sincere congratulations. They have done well for Persia and Belgium; for the other they have rendered a signal service.