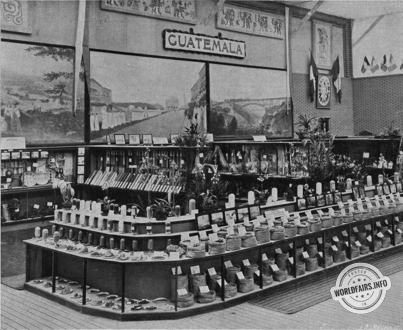 The Guatemalan government considered it a good opportunity to draw the attention of the European world to its country and officially joined the 1913 exhibition and appointed its consul in Ghent, Mr. Van de Putte, as Commissioner General. He had appointed Mr. Van de Velde and Mr. G. de Smet as deputy commissioner general and secretary general.

Mr. Van de Putte, who knows the country of which he is the eminent representative, who appreciates its needs and aspirations, and who knows what benefits can result from the extension of relations between Guatemala and Belgium, wanted the section to be instructive without being tiring, and to provide instruction as well as information.

Guatemala was therefore presented to the visitor in the form of a huge map showing, in addition to the geographical features of the country, the roads and railways that serve its main centres. Wall panels completed this information by indicating the aspects of the different parts of the country and by giving glimpses of certain public institutions: thus, a painting - the Feast of the Schools - showed the solicitude of the Guatemalan government for the development of popular education, while the boldness of the engineers and the importance of the public works carried out were highlighted by the plans of an enormous bridge thrown over a valley to ensure the passage of the railways. By means of reproductions of Aztec and Mayan paintings, pre-Columbian sculptures, and photographs of pre-historic ruins, Guatemala sought to prove the antiquity of the civilisation of which it had been the scene.

Documents in kind then introduced the country's riches. Thanks to the varied altitudes of its soil, Guatemala can boast of combining the climates of three zones and of obtaining all the productions. Several hundred large plantations exhibited samples of wheat and maize, sugar cane, coffee, cocoa and cotton. All these products were carefully labelled and presented in open bags.

The same arrangement was adopted for minerals, of which there were many samples.

Finally, collections of birds, mammals and reptiles introduced, in a picturesque way, the fauna of the country, while the flora was represented by a beautiful collection of essences and orchids whose attraction added to the real charm of the Guatemalan section.