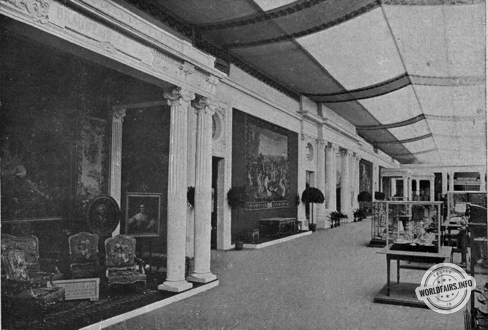 The Salon d'honneur, an artistic jewel, needed a brilliant and harmonious setting. In its immediate vicinity were the stands of jewellery and goldsmiths, national manufactures, furniture and bronzes, glassware, perfumery, clothing and couture; all inspired by the pure traditions of French art.

On the fringes of the Salon d'Honneur and the main façade of the Palace of Luxury Industries, there was the Gallery of Honour with its elegant yet simple showcases, where gold and silver objects of perfect taste shone; pure jewels glittered under the light filtered by the canopies; at the back of the gallery, columns framed the stands of the great Parisian furnishing houses; precious furniture, paintings and tapestries were admired. By its size, its luxury, its beauty, this gallery of honour gave a profound impression of grandeur; had it not been for the staff columns, it would have resembled rather some historic castle gallery than an exhibition bay.

At one end of the Hall of Honour was the compartment reserved for the products of the national manufactures of Sèvres, Gobelins and Beauvais, represented by the most beautiful specimens of their manufacture; the Sèvres manufactory had also contributed to the decoration of the hall of the Conference Room by decorating it with an immense portico in porcelain stoneware, eight metres long and five metres high, decorated with crystallized covers and stoneware sculptures.

Next to the Salon d'honneur, and in a not unattractive combination, was everything related to furniture and furnishings, a vast programme that was brought together by the Salon des Arts décoratifs modernes, a true synthesis of the efforts made in France towards a new decorative art. In this show, a concern for simplicity and comfort was revealed in a great sobriety of tones and lines, which contrasted singularly with the contortions and extravagances that doomed the "modem style" to an imminent death.

For the art of the ceramist, the tendency to search for rare but harmonious colours should be noted. The fine results obtained in this field by masters such as Daum and Gallé, to mention only two universally known names, are well known; they contributed to an aesthetic renaissance in the same way as Dalique in goldsmithing and jewellery.

In Ghent, the Salon des arts décoratifs modernes offered remarkable examples of these interesting attempts. One could compare modern trends with the classical styles to which several major furniture houses remain faithful, with constant good taste.

The bronze, bookshop and photography sections were no less attractive. As far as bronze art is concerned, Paris has retained a reputation bordering on a monopoly; and in Ghent one could admire remarkable specimens of the art of the founder and of his skill in closely following the work of the original.

Printing - typography and lithography - has continued the progress it has made for four and a half centuries. New machines increase production, while at the same time making them so perfect that any improvement now seems impossible.

The illustrated book, affordable to all, is the latest conquest of the French book trade; one notes with joy a search for beauty in the printing as well as in the binding; by taking up old types, publishers seek a new and adequate adaptation to the book.

This also applies to school editions; in short, books for the general public are presented in the guise of art editions.

A small compartment close to the Salon d'Honneur held the visitors. In a propitious darkness, tiny scenes showed their luminous decorations made of marvellous palaces and enchanting landscapes.

Echoing the preoccupations of Parisian theatre directors, concerning the art of staging, this compartment of theatrical equipment and accessories featured the talent of renowned decorators.

The music section was similar; modern music seems to be characterized by a profound science of modulations, so that it has been said that it is essentially chromatic, and, as a result, composers no longer confine themselves exclusively to the classical tonalities of the past.

In the class of musical instruments, the gramophone preserves the composer's thought and transmits it with the same fidelity as is, in the other classes of the graphic arts, that of the writer, the scholar or the artist.

Everywhere, moreover, this concern for art and truth dominated; the note of elegance existed as much in heating and lighting appliances as in musical instruments.

In the field of heating equipment, there were diagrams of hot water heating systems and related equipment, as well as sheet metal and cast iron coal stoves and gas stoves.

Finally, visitors could see how the problem of feeding large numbers of people had been solved by steam cooking.
Among the lighting devices, the ones that use electricity as a lighting power were especially noteworthy.

Everything that concerned the mechanical production and use of electricity, electrochemistry, electric lighting, telegraphy and telephony with or without wires, the various applications of electricity, etc., were represented in the French section.

It is known that for some years now, very interesting tests have been carried out in France for the telegraphic transmission of photographs. In the electricity section, the telephotography apparatus used for this purpose was presented by the Société des télégraphes Edouard Belin.

This was one of the most interesting aspects of French science in practice. In this connection, the chemical and pharmaceutical section was of great interest.

Organic chemistry stood out in the French Section in Ghent for the colouring matters it has created and whose collection is growing daily, as well as for the advantageous modifications it has made possible to apply to products taken from the bodies of animals.

Inorganic chemistry is progressing hand in hand with organic chemistry. The great industry which deals with the manufacture of mineral acids, common salts and mineral bases or alkalis, will always remain at the head of the chemical industries. It is this industry that has undergone the most important and interesting transformations. First of all, the soda industry has been profoundly modified in the last fifty years, since the ammonia soda process replaced the age-old Leblanc process. Then it was electrolytic soda ash which threatened ammonia ash and which might have been a disastrous competitor to it, had it found a use for the enormous quantities of chlorine it produces.

The Société chimique de France and the Institut de Chimie appliquée had, as it were, concentrated the latest progress made in this field, the former by bringing together the collections of products discovered by its members in recent years and by representing the effort made in the laboratories with a view to purely scientific work; the latter, by placing in the same showcase the products prepared by its students and those obtained by its scientific staff.

The serious aspects of science were opposed, thanks to the Salon des Humoristes, by the vivacity, gaiety and causticity of the French spirit.

All the visitors left this salon with a smile on their lips; cruel ironists, delving into the darkest and most abject corners of the human soul, these cartoonists sometimes made people laugh; they often left the bitter taste of their pessimism in their hearts, if they did not arouse the disgust of honest people.

Without doubt, the lesson was marked by an excessive realism; it was not suitable for everyone; but it was not lacking in power; under a seductive exterior, this salon gave some scathing or ferocious lessons; it "laughed at everything so as not to cry".

Alongside these spicy transcriptions of an excessively depraved life, we entered the realm of good-natured humour with Jean Veber, Hermann Paul, Moriss and Trochet, while Poulbot gave us a touching vision of a pretty, candid, often depraved Parisian childhood and Chéret translated his dreams of elegance and precious colours.

Let us compare the works of these "journalists", as the "pure" artists call them, with a little disdain, the amusing compartment of the articles of Paris; there is not a foreigner who, sitting in the evening on the terrace of a café in the Place de l'Opéra, has not been entertained by the spectacle of the hawkers offering their latest creation, some ingenious toy reproducing life itself with a truth and a picturesqueness that make one smile.

Some of these toys were to be found in the above-mentioned compartment; but one also noticed there the new orientation of the childish mind, scientific toys.