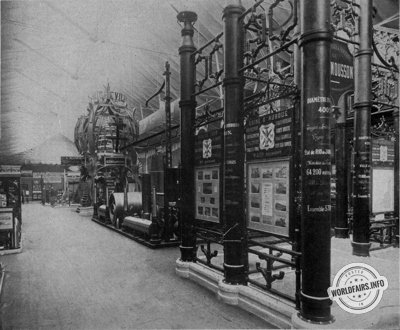 Next to the Palace of Luxury Industries and linked to it by the bay that housed the exhibitions of the towns of Tourcoing and Comines, a second palace faced the Avenue des Nations and the Avenue de Flandre. At the point where the two avenues met, the entrance to the City of Paris pavilion opened. In addition to this pavilion, the Palais included the French groups of small and large metallurgy, electro-metallurgy, mining, mechanics, agriculture, aeronautics and automobile, medicine and hygiene.

The quarrying and explosives industries were also represented; the statistics showed a deficit in French coal production in relation to total consumption.

From the point of view of metal mines, France is very unevenly divided. While the deposits of lead, zinc, copper and antimony are not very abundant, its soil has the finest known reserves of iron ore. Alongside the Briey basin, whose hydroxide ore is finding a rapidly growing outlet in local industry and beyond the borders, we are seeing an increase in shipments of ores from Normandy; the deposits in the Caen region, developed with activity and method, seem likely to provide world consumption with a growing supplement of carbonate-silica ore, whose reserves appear to be considerably larger than previously thought.


In addition to the mining processes and the variety of products supplied for consumption, the mining companies had endeavoured to draw the public's attention to their social works.

The French metallurgy industry has been going through an era of great prosperity for several years. Numerous factories have been developed and others, very important ones, have been created, notably in the East, in the North and in the West.

The metallurgical products exhibited by the French industrialists attracted attention by their value and diversity, in particular the Arbel establishments, which made a large contribution to the supply of forged parts necessary for national defence and for the battleships planned in the programme of the French Navy; they exhibited straight and bent shafts, a turbine rotor of 1.8 m. in diameter for a battleship turbine, a sleeve and a shell for a 30 cm. gun, shells, etc.

The value and great variety of French products proved the remarkable development of small-scale metallurgy.

The mechanical group was located next to the small and large metallurgy groups, an arrangement that was favourable to all the manifestations of these related industries. It alone occupied a vast hall of nearly 2,000 square metres and, without presenting engines of exceptional power or machines of considerable volume, it was remarkable for certain new devices as well as for the perfection of the machines which were used.