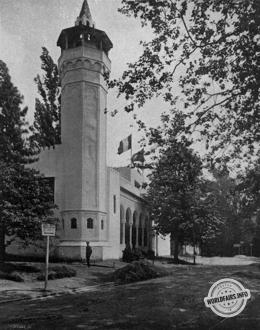 A ministerial decree of 30 May 1912 had decided to organise an important colonial participation; it entrusted the realisation, under the control of the Commissioner General, to the National Committee for Colonial Exhibitions; exception was made, however, for everything concerning the administrative services whose participation was to be the work of the governmental authorities.

With these initial arrangements in place, the organisers of the Colonial Exhibition set to work: the Ministry of the Colonies invited the administrations of the French possessions to send it directly everything that could be included in the exhibition. The products, objects of all kinds and documents of all kinds thus collected were sent to Ghent, and under the direction of officials specially appointed for this purpose, they were distributed, according to their origin, in the pavilions of each of the colonies they were to characterise.

Paul Vivien, president of the Syndicat de la Presse Coloniale Française; 30. Class of colonial equipment, subdivided into Equipment, under the presidency of Mr. Henry Faucher, chief engineer of the Compagnie Industrielle des Procédés Raoul Pictet, and Transport, under the presidency of Mr. Axandre Darracq, engineer-constructor in Paris; 4th Class of products for export to the colonies, presided over by Mr. André Mandeix, president of the Syndicat Général du Commerce et de l'Industrie du Hâvre. In addition, admission and installation committees corresponding to each of these four classes were also created to examine individual applications for participation addressed to the Committee.

Visitors to the colonial section were quick to notice the considerable efforts made by the ministerial administrations and by the National Committee to make this event worthy of the great country whose magnificent colonial resources these bodies were charged with highlighting.

Both were fully successful and the French colonial participation was remarkable for the quantity and quality of the products exhibited, as well as for the diversity and importance of the collections distributed in each of the pavilions. It should be noted that the French Colonial Exhibition was presented in Ghent in a completely different way from the exhibitions in Liege and Brussels.

At the latter World's Fair, the intention was to impress the visitor's mind and to show him the appearance of these distant lands and the customs of their inhabitants, by building palaces in exotic style, intended for the presentation of extraordinary collections or for the exhibition of colonial naturals. In Ghent, the Colonial Exhibition was a lesson in things; it was documentary, commercial rather than picturesque, and, as Mr. F. Crozier said excellently on the day of the inauguration of the section, it was intended to present, without too much art or process, a methodical sampling of the most important products of all the French colonies.

The site specially reserved for the French Colonies Section was located in the Park of the old citadel, in one of the most attractive parts of the exhibition. It covered an area of about 10,000 square metres. Seven pavilions had been built on this vast site:
1° the French colonies pavilion
2° the colonial trade pavilion
3° the removable pavilion;
4th the installation of the French Company of Sangha-Oubanghi;
5° the pavilion of Morocco;
6° the flag of Tunisia;
7° the Comptoir des Produits Algériens pavilion.

The official pavilion of the colonies contained the exhibition of the French Ministry of the Colonies, as well as that of the Colonial Office and the Colonial Garden of Nogent-sur-Marne, where very interesting studies of colonial agriculture are being carried out; one could see there all the products, graphic objects, documents coming from French West Africa, French Equatorial Africa, Indo-China, Madagascar and the other French possessions; the official services of these various governments were also installed there.

The pavilion of the Metropole, or colonial trade pavilion, housed the particular exhibitions of importers of colonial products in France, and exporters of French products to the colonies; the exhibitors were grouped in the four classes we have previously indicated: import products, colonisation processes, colonial equipment and products for export to the colonies. It was particularly to the organisation of this pavilion that the activity of the French National Committee was devoted, an activity to which it is only fair to pay the tribute it deserves.

The Compagnie forestière de Sangha-Oubanghi had a special pavilion where it had installed a very interesting diorama and where it exhibited the main products that it obtains from its vast concession in the Congo, notably rubber and ivory.

Finally, Morocco and Tunisia also had their own special pavilion. It should be noted that it was in Ghent that Morocco took part in an exhibition for the first time: the interest in this new French protectorate, the limited knowledge about it, the future prospects that were being offered to it, as well as the very remarkable results already obtained in the regions opened to European colonisation, were all reasons that attracted the public to this part of the French exhibition.

Needless to say, the colonial section was of the greatest interest, both as a whole and in its details? The colonial work carried out by the Republic in the various parts of the world is also remarkable. France has endeavoured to develop, pacify and enhance its colonial empire with a tenacity of effort and a happiness in the methods of application which place France in the forefront of colonising nations; the results obtained were to be judged by the public at the Ghent Exhibition: the Belgian public, increasingly interested in colonial questions, was examining with keen attention this demonstration of a country which had already achieved so much success in the field of colonisation.