Diamond Palace and the Palace of Various Industries - Expo Ghent 1913 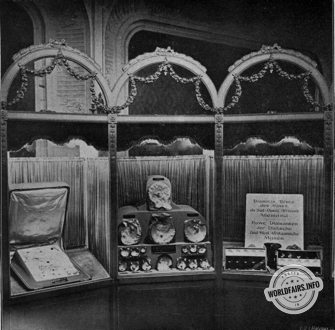 In the sumptuous palace of the diamond manufacturers, everything was designed to give the visitor a quick and striking view of the prosperity of this industry.

It was in 1456 that Louis de Berquem of Bruges invented the art of wearing and polishing diamonds by rubbing with diamond dust; he settled in Antwerp and trained many pupils. He was the first to cut it with regular facets, and he is credited with the masterpiece of three large diamonds cut for Charles the Bold, one of which the Prince wore on his finger when he died and is now in the possession of Spain.

After the proclamation of Belgian independence, the diamond industry flourished again. The cutting workshops were immediately opened to men and women, especially for the rose-cutting of thin diamonds, 16 to 12 faces, which can only be produced in Antwerp, and of 24 facets, known as Dutch roses.

Around 1836, Antwerp merchants, the brothers J. and L. Bovie, brought over a number of workers from Amsterdam who set up a school and trained many pupils.
In 1840, Messrs. Bovie set up the first steam cutting mill, and from that moment on the diamond industry entered an era of prosperity. The discovery of new deposits and, above all, the creation of a syndicate in Antwerp, which has a monopoly on the sale of the entire production of the German South-West African colony, have given the diamond industry in our metropolis a prosperity that had never been achieved.

The city of Antwerp and the whole of the Kempen region benefited greatly from this. In a few years, the number of diamond workers rose from 4,000 to 16,000, earning about forty million francs a year in wages and causing an intense business movement in the whole region.

A considerable number of new workers were trained by the Antwerp labour chaplains, who founded a school for cutting very small diamonds. In a very interesting stand in Ghent, the labour chaplains presented their teaching methods and the results obtained. In their schools, young people receive a complete theoretical and practical training; in addition to diamond work, languages, accounting and various commercial branches are taught.

The initiative for this institution came from Mr. Hubert, Minister of Industry and Labour. He found in Mr. Coetermans, the great Antwerp diamond dealer and the distinguished Persian Consul General in Antwerp, a collaborator of acknowledged competence and inexhaustible generosity.

The stands of the diamond community formed a luxurious salon where, in elegant showcases, brilliants, ornaments, diadems, aigrettes, threw their lights next to diamonds in the rough or open shells showing the iridescent pearl, still adhering.

Two workshops introduced the public to the work of diamonds; an Antwerp manufacturer of diamond-cutting wheels spiced up his exhibition with crystal reproductions of the world's largest diamonds.

The Belgian Diamond Show was very interesting because of its richness, its luxury, and the art and meticulousness with which it was set up.

Goldsmiths' wares, which form a separate class, adjoined the diamond exhibition; it included silverware and jewellery; the latter is produced in Belgium in large quantities.

Cutlery is an old industry special to the region of Namur and Gembloux.
Already, in the first exhibitions organised in Belgium, and in particular in Ghent, in 1820 and 1849, the Namur manufacturers exhibited masterpieces of cutlery.
Today, the value of the cutlery maker is no longer measured by the greater or lesser complication of the exceptional pieces, but by the excellence of the standard article. In this respect, the Belgian cutlery upholds its old reputation. About ten manufacturers exhibited various pieces of cutlery and surgical instruments in Ghent.

The brush industry is only about thirty years old; its production is intense in Flanders, where we find, in particular, the very important brush factory of St-André-lez-Bruges, belonging to the establishments Delhaize frères & C°, brand "Le Lion". This factory, which produces all types of brushes, employs more than 400 men and women, who are powerfully supported by highly sophisticated equipment. The products are exported in considerable quantities and are highly appreciated abroad.

Vienna held the monopoly of meerschaum pipe making for a long time, but it was not until 1850 that several successful attempts were made in France, and in 1863 in Belgium.

Pipe making is mainly a luxury item. There are, however, clay pipe factories in Nimy, Brée and Liège, where imitation asbestos pipes are also made.

Brussels and Arlon have some workshops where root pipes are made. Antwerp, Liège, Ghent, Charleroi and Mons also employ some workers in the partial manufacture of the article.

Brush factories, such as the factory in S1 André-lez-Brages, pipe factories and leather goods factories exhibited their various products in Ghent.

The rubber industry was introduced in Belgium in 1852. Gradually, the ever-increasing consumption of rubber articles and the extraordinary development of the market for raw material in Antwerp, but of Congolese origin, led to the creation of large factories. These factories, which have gained a worldwide reputation, manufacture rubber for industry; others specialise in specialities.

As a result, in proportion to its population, Belgium has the largest number of rubber factories in the world.

A quarter of a century ago, the travel goods industry was limited to the manufacture of canvas or basane items. Costly items were mainly imported. As the consumption of travel goods increased and the taste for travel grew, a new industry was established in Belgium. Combining the manufacturing methods used in Germany and England, Belgian manufacturers succeeded in creating a type of practical, solid and elegant articles which, after quickly conquering the Belgian market, were introduced in Holland and its colonies, in Switzerland and Italy, then in France and its colonies, in Brazil, in the Argentine Republic and even in Germany and England. Every day, this industry is growing and factories have already been set up to exploit it.

A considerable proportion of the exhibitors in this class, forming the Antwerp-based Rubber Planters' Association, had assembled their products in the Belgian Congo Palace. The other exhibitors, manufacturers of rubber, gutta-percha, asbestos, travel goods and medical equipment, showed the importance acquired by these various industries in our country. In particular, they exhibited a host of objects made of rubber, ebonite, asbestos adapted to various industrial and domestic uses, rubberised fabrics, stuffing, very ingenious yet solid and elegant travel articles, tents, blankets and operating furniture.