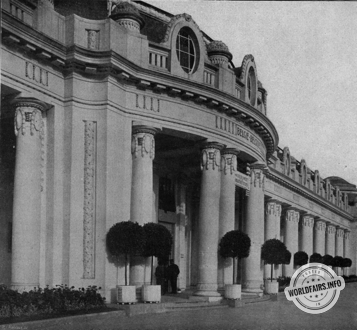 When, on 2 May 1345, the weavers and fullers of Ghent fought a fratricidal battle at the Friday Market, which is remembered in popular memory as "Bad Monday", they were already affirming the power of the textile industry in the economy of the capital of Flanders.

For centuries, the processing of wool, then linen and finally cotton, has been one of the main sources of prosperity in Ghent; it has shaped the city's character as an industrial city and has played an important role in all the events that have taken place there.

From the middle of the Middle Ages onwards, the Flemish cloth industry migrated from the countryside to the cities and brought to Ghent, along with opulence, complete dominance over all its neighbours. Thanks to the energy of its burghers and the freedoms acquired by their powerful guilds, the city maintained this supremacy for three centuries; during this period, Ghent was universally known as the classic city of weavers.

After the disappearance of the wool industry, the city took over a large part of the Flemish carpet production in the 16th century; in the 17th and 18th centuries, a time of industrial decline, the flourishing trade in cloth manufactured within its walls maintained its reputation. Towards the end of the 18th century and at the beginning of the 19th century, the linen and cotton industries took hold.

Since that time, Ghent has remained the centre of the textile industry in the Flemish region of the country. It was one of its children, Liévin Bauwens, who in 1800 introduced the processes and machines of mechanical cotton spinning to the continent. Today, articles of Ghent origin are spread all over the world and carry the just reputation of its great industries far and wide. Such a background necessarily demanded that these industries occupy a prominent place at the World and International Exhibition of 1913.

The Textile and Clothing Industries group provided the Ghent World's Fair with the magnificent palace that was solemnly inaugurated by His Majesty King Albert on 16 May 1913.

A sure guarantee of success was the composition of the committee, formed to undertake the difficult task of offering the public the compartment that would later shine as one of the finest jewels of the Belgian Section. This committee was composed of Messrs Ferd. Van Hoegaerden, chairman; Ferd. Feyerick, deputy chairman; Eug. Choque, Count Ferd. de Hemptinne, Georges Peltzer and Stroobant-Bogaerts, vice-presidents; Georges Van Acker, secretary; Marcel Liebaert, assistant secretary and A. de Meulemeester, treasurer. Mr. Amand Casier was the group's commissioner.

It is said that the tool is only as good as the worker. The workers who, for this section, possessed the means and the material likely to be used for the development of a model section, acted as true artists. The very conception of their work was original; throughout the Palais de la Mode et des Industries Textiles, one could find the guiding idea that had guided its organisers. They wanted to educate the public, to give them an idea of the importance acquired by the Belgian industry and to show them that the textile industry does not consist, as is unfortunately still too often imagined, in the production of a few bales of thread or a certain number of pieces of fabric, but that it counts among its followers, wise technicians coupled with true artists.

The luxury of the section, its rational layout, the way in which the most varied stands were presented, demonstrated the organisers' original conception of the exhibition. The dioramas representing the various phases of the manufacturing process that textile fibres go through from their cultivation to their transformation into finished products, allowed visitors to broaden their knowledge and provided them with practical, interesting and useful instruction; the aim was thus fully achieved.

Located in the centre of the main courtyard, the Textile Group's palace occupied a position that attracted the flow of visitors coming through the main entrance.
With an area of over five thousand square metres, the organisers could boldly arrange their section according to a plan, and at the same time remember that once upon a time boredom arose from uniformity. So, once inside, one took pleasure in strolling along these wide and spacious aisles, intersected here and there by octagonal stands and dioramas, to then visit the bright rooms whose rich and opulent, coquettish and elegant appearance one could admire at ease, or to stop for a few moments in the hall of honour decorated with imposing plastic groups representing types of workers of the textile industry. There was nothing banal about it; it was no longer the interminable line of display cases lined up in a row of tightly packed stands, cupboards invariably containing the classic rainbow formed by an assembly of spools or variously coloured fabrics. Here, showcases, set in the middle of large empty spaces, ensured the necessary distance and general views; the stands of the enormous spinning mills and weaving mills of linen, cotton, jute and wool, competing with each other to harmonise into a remarkable whole, gave a clear idea of the strength as well as the importance of the Belgian textile industries. In short, it was the formidable power of the factory and of machinery, displayed in beautiful mahogany cabinets with gold bars.

It is worth mentioning that the compartment was ready on time. The "vernissage" of the palace, which preceded the official opening by eight days, took place on 29 April.

The left-hand corner of the section was reserved for the Dyeing, Finishing and Bleaching classes, presided over by Mr. Prosper De Backer. The participation of this accessory branch of the textile industry was concentrated in a vast room, richly decorated with a frieze representing different stages of work and views of the large finishing establishments in Ghent. This frieze, masterfully painted, was the work of the conscientious artist, Mr. J. Gondry. A gallery was reserved for the linen industry class, presided over by Mr. Jules Grenier. In addition to the display cabinets showing the tools and the most varied products of the Belgian spinning and weaving mills, there were complete collections of all types of linen, jute and hemp, exhibited by the care of traders and agents in raw materials. These collections were supplemented by superb photographs showing the many scenes of the harvesting and transport of Russian flax. A special collection included the famous Lys flax, whose silky golden yarn is used for the production of high quality yarns and fine cloth. Numerous photographs allowed the public to see the various operations involved in retting the flax, an industry that extends in Belgium along the Lys for 75 kilometres from the French border and occupies a significant part of the population of southern Flanders. As a curiosity, a few handfuls of flax dating from 1830, accompanied by documents confirming their authenticity.

The preparatory work was represented in the flax diorama installed on behalf of the Belgian Flax Spinners' Associations by two of Ghent's best artists, Mr. Hipp. Le Roy, statuary and G. De Smet, painter. Superb panels, full of life and light, marvellously rendered the field where the small, slender, glaucous green plant grows, topped by a tiny blue flower. This was followed, in order, by scenes relating to the actual harvesting, retting and scutching. Further on, compartments reproduced the factory rooms reserved for combing, spinning and reeling. In one corner, a moving vision: a thatched cottage housing an old weaver working on his antique loom by hand, despite the disastrous competition from the factory whose various lit floors can be seen in the distance. This last part of the diorama could not fail to capture the public's imagination. It evoked the harsh times of crisis that the Belgian linen industry went through half a century ago, when the old Flanders, keeping an unshakeable faith in the primitive craft of its ancestors, stubbornly refused to subscribe to the demands of machinismo, and went through one of the most painful periods of industrial evolution. This simple but striking evocation was an interesting lesson in political economy for the attentive visitor.

Opposite the linen diorama, the cotton diorama was set up by the Belgian Cotton Association and the Association of Cotton Agents and Brokers. These two groups, which were joined by the Belgian Weaving Association, formed class 80, chaired by Count F. de Hemptinne; this class alone took up a huge space. As with flax, the plastic representations of the cotton diorama showed the different transformations that the fibre undergoes; one saw successively the harvesting in a plantation under the hot Texas sky, the picking by Americanised negroes, the baling, the transport to the quays of a large cotton port, the loading of the cargo, the work in the factory.

A third set of views completed the synthesis of the three major Belgian textile industries: wool and the many aspects of the cloth industry. Thanks to a clever arrangement of mirrors, all the rooms represented appeared to be of enormous dimensions, so that one could really believe oneself in the middle of a factory. A special panorama contained mannequins dressed in the most brilliant fabrics. Everything was logically linked and did great credit to the Verviers community, presided over by Georges Peltzer and André Simonis, as well as to the two authors of the diorama, Jules Pierre and Lynen fils, from Brussels.

Another aspect of large-scale industry was added to this technical display: social action, which was illustrated by numerous graphic charts concerning the prevention of accidents at work and compensation for damages.

The hall also housed the section reserved for the footwear class, headed by Mr. van Marcke de Tummen; it showed the most varied products of the footwear industry, a manufacture that is becoming increasingly important.

The lace exhibition served as an antechamber to the last large compartment, the marvellous clothing exhibition set up by the Clothing Class under the energetic direction of Mr. Eugène Choque. This salon, rightly called the "Salon-lumière", illuminated by thousands of electric lamps of various colours, was the real crowning achievement of the work undertaken by the organisers of the Textile and Fashion Industries Palace.

The sumptuousness of the show, the success of these magnificent but ephemeral creations of luxury couture, the wealth displayed on all the stands, clearly proved that the great Belgian firms, among which the houses of the Ghent community shone at the forefront, no longer have anything to envy the most famous foreign couturiers.

The perfect installation of the Palace has enabled brilliant social receptions to be held there on several occasions, such as the one held on the occasion of the visit of HRH the Prince Consort of the Netherlands. On 16 June, the members of the Belgian flax spinning associations received their colleagues from all over the world at the International Congress of Flax and Tow Spinners, chaired by AI. Ferdinand Feyerick and of which Ghent is proud to be the seat. Some time later, it was the members of the Textile Institute of Manchester chaired by Sir W. B. Briestly, who attended a tea-concert, while the members of the Mutuelle des liniers du Nord de la France had met their Belgian friends and colleagues there a few days earlier.

The great effort made by the textile manufacturers was not in vain. They have effectively contributed to the general progress of the national industry and demonstrated once again that Belgian industry has enough initiative and courage to carry out the greatest undertakings.