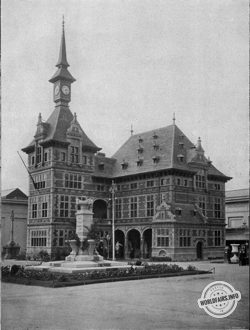 The Liège palace, built according to the plans of the late J. Lousbergs, the city architect, was inspired by the Maison Curtius and recalled the Liège style of the 17th century with its high roofs, its beautiful dormer windows and its projecting cornices, carried on important corbels. A square tower topped by a campanile and finished with an elegant and light spire stood out from the main façade. At the north-western corner of the palace, a cast of the famous Liège Perron or Fountain of the Three Graces, the work of Delcour and a symbol of the freedoms so dear to the "valiant people of Liège", had been built.

Inside, three rooms had been reconstructed; one in Renaissance style, with a fireplace from the Curtius house; the other in Regency style, decorated with mouldings of the woodwork from the d'Ansembourg hotel; the third, in Louis XVI style, was inspired by a room in the former prefecture (now the Liège Museum of Arms) and decorated with paintings recalling sites in the region.