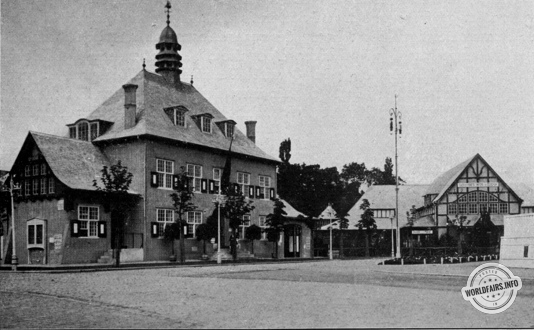 In the centre, the Grand'place, with its median, its public fountain, its small kiosk, its flowerbeds.

All around, the butter factory L. Mélotte butter factory and the Water and Forestry Pavilion. Then, the coquettish town house, hooded with high slate roofs, giving character to the perspective of the small square, which was embellished by its coloured shutters folded down on the light-coloured walls. Opposite, the mayor's house and part of the Ollendorff farm.

On the other side, the massive but attractive church with its Romanesque nave and mystical stained glass windows, and the traditional inn nearby.

At the entrance to the Exhibition, there is the Moreels farm, adjacent to the J. Mélotte butter factory, and the agricultural school in the gardens of the mayor's house. Further on was the Milage inn with its garage for cars; then the bookshop and the pastry shop; not far away, the Von Ollendorff farm,
the Comhaire forge, the Persoons skimmer shop, the Post and Telegram building. Near the sports ground, the model school with its flowered forecourt, its courtyards, its trees, its garden; then the large farm of the committee with its roof with many dormer windows, the house of the carpenter beekeeper.

In the large hall adjoining the town hall, the exhibition of A. Mélotte's farm machinery; the temporary school of the schoolmaster; the exhibition of the beekeeper. Mélotte; the temporary school of agricultural mechanics; the horticulturist's house in light tones, with its simple and charming fence; the gardener's dwelling and a worker's house; a renter's villa, suitable for the seaside as well as for the fields, with a terrace and a loggia for a siesta or a daydream. And, dominating the extreme corner of the village, a gigantic aermotor which makes the surrounding dwellings seem smaller, more charming and more graceful.

Several of these constructions had been made by exhibitors from the Agriculture and Horticulture groups; the firms J. Mélotte, Société anonyme des Charrues de Gembloux, Persoons, Mooreels, the Comptoir Belge de Sulfate d'ammoniaque, the Anglo-Continentale Guano Works, had exhibited their equipment or their products in this interesting form. However, a fairly large number of exhibitors from the above-mentioned groups could not find space in the houses of the Modern Village. This was the reason why the Organising Committee decided to create an exhibition hall hidden by the town hall.

The Water and Forestry pavilion had also found a place in the Modern Village; it made a good impression there. In this rustic pavilion, which was surrounded by a pretty garden planted with a collection of conifers, there was a very interesting collection of samples of the main species cultivated in Belgium, with their defects, the diseases that attack them, the insects that cause them, the different species of fish that inhabit our fresh water, as well as some foreign species whose acclimatisation is advisable. In this field, visitors could also find exotic fish for aquariums, aquatic plants and insects, fishing gear, fish farming tools, etc.

Hunting was represented by collections of birds that had never appeared in previous exhibitions, as well as quadrupeds, albino birds, traps, furs, feathers, etc. A diorama showing the mouth of the Zwijn with its fauna attracted the attention of the visitors.
In the compartment reserved for roads and water improvements, maps and diagrams were displayed giving information on the current state of the byways, as well as on the work carried out by the various public authorities to improve the roads and the muddy grounds.

The Modern Village was not only a first-rate attraction for the 1913 Exhibition; it was above all a social work of the first order; its results go beyond the duration of its existence; it is the starting point of a renovation of rural life.

The honour belongs above all to Mr. Paul De Vuyst, who prepared the enterprise with great care and was its driving force. Thanks to his intelligent conception, thanks to the help of intelligent and devoted collaborators, the Modern Village has imposed itself on the public eye; it is the formula for the future of any agricultural exhibition; it is the best reward that can be given to those who have ensured its exceptional success.

It is only fair to add to the name of Mr. De Vuyst, those of Mr. Jules Maenhaut, Mr. Jules Mélotte, Mr. F. Graftiau, Mr. Firmin de Smet, Mr. J. Giele and Mr. Léon Verstraeten; the organisation of this undertaking was laborious; seemingly insurmountable difficulties had to be overcome. The energy, patience and perseverance of the members of the Committee overcame all obstacles. They are entitled to the recognition of the farmers and of the whole of Belgium.