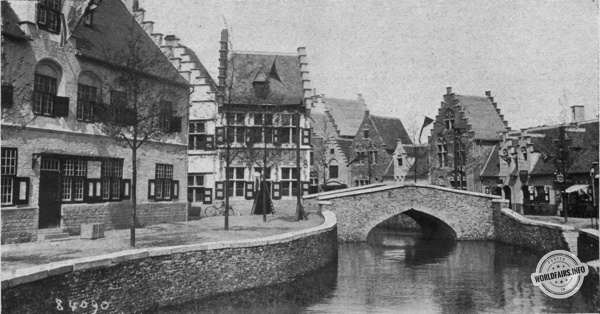 It would take an artist's soul and a poet's pen to describe and sing this superb evocation of the small Flemish town.

Old Flanders, the Flanders that was, with its sumptuousness and its peaceful charm, with its gems and its brocades, but also with its bureaus and its frank simplicity, with its haughty courage and its long pious orations, its quivering estocs and its psalters with their quiet illuminations, what an evocation that is both poignant and exquisite! What an ideal reminiscence in our century of prosaism and sometimes of hysterical ugliness!

Where are we? Are we in Ghent, in Bruges, in Fûmes, in Ypres? in the land of tulips and grey mills drawing their impassive silhouettes on the velvet of a sky lamé with lead and clouds? or are we over there, in French Flanders, which was once our Flanders, and where so many of our people are still sleeping the sleep of the ages?
These lacy gables, these rigid belfries, like heralds, jealous guardians of the privileges of our communes, these towers with their gaunt forms rising towards the sky, like the surge of faith of a great heroic race, all this poetry, are they illusions of an inspired mysticism, or the fruit of a strange dream, conceived in a night of delirium? ... Is it a sudden mirage that recedes, impalpably disappointing, as the pilgrims of the dream approach? No, the granite shudders with the breath of sonorous echoes, the bells flutter behind the half-open canopies of the towers; and, over there, helmeted with a bluish plume, the chimneys stretch out on the sea of red roofs, the shadow of their uniform structures... A woman, hooded in black, has just disappeared around the corner of an alley; groups of middle-class people stroll along, talking about the events of the day; further on, there are the cries of children having a good time; elsewhere, there is the silhouette of a young girl playing the viola behind a patrician balcony. We are at home, we are in Flanders.

No soul sensitive to the harmony of the > lines, to the unexpectedness of the tortuous streets, to the elegance of the old gables, to the charm of the colour could have strolled without emotion in this charming and graceful town.

On spring days, on summer mornings as well as on October evenings, with what joy one savoured the exquisite voluptuousness of melancholy and dream, of wandering in this enclosure set back by the ages...

After the buzz of the Hall of Machines, the shrill and discordant cries of the amusement park or the jostling of the Avenue du Belvédère, the impression was intense for those who, escaping into the villette, established between their sensibility and things, the link of sympathy. This is the feeling that Firmin Van den Bosch expressed in front of the monuments of Old Ghent, at the Ruins of Saint Bavo, as well as in the alleys of the Beguinage. In these 'reigns of silence', where a slow and quiet life hovered, there was an exquisite antithesis between the hasty, hectic and enervating existence in which one was swirling a moment ago, and the calm and soothing atmosphere in which one suddenly felt bathed when entering this faithful and artistic evocation of our beloved Flanders' past.

But Old Flanders was not only a poetic and artistic evocation; it had its hours and days of fun; one could not conceive of a Flemish town without a fair; the dream had to give way to a lively and noisy reality. "Then," wrote F. Van-denbosch, "the Maid of Ghent (or elsewhere), with eyes of candour and dream, sketches a popular flirtation and gulps down many broths of 'double' at the improvised tables in front of cabarets. With a rhythmic step, she follows the music of the chochetés that roam the squares and streets; she crunches crabs and oliekoeken; she stops in front of the street singers' trestles; and in front of the belfry, to the sound of a few polkas or mazurkas played by the communal music, she unfurls her farandoles and her cramignons, in an atmosphere saturated by dust. "


What life was like in the past in Flanders, what our towns and villages were like, others better informed and more competent have described it; it would be presumptuous to try to follow in their footsteps. In addition, Mr. Victor Fris painted a captivating picture in the beautiful booklet published by the organisers of Old Flanders at the 1913 Exhibition.

For the execution of the contract linking Old Flanders to the Universal Exhibition, the Executive Committee delegated one of its directors general, Mr. Joseph Casier. Notwithstanding his absorbing duties in the first directorate-general and in "Old Art in Flanders", he did not hesitate to lend his support to an enterprise intended to glorify the Flemish past.

Mr. Valentin Va.erwyck was appointed to draw up the plans; the preliminary project was adopted on 1 August 1911; in December 1911, the final plans were drawn up on the basis of a survey of all the gables selected for reproduction.

Mr. Armand Heins was the author of the three dioramas; the album of his sketches of Flanders was made available to the Old Flanders Committee.

The work, which began on 1 May 1912, was undertaken by Mr. Emile Wyckaert and completed before the opening date of the World Fair.

All the staff age work was done by Mr. Cornelis, brothers and Mr. Oscar Sinia, sculptors in Ghent; Mr. J. Blanquaert did the artistic ironwork; Mr. René De Cramer designed the poster, which was a marvel of its kind, and painted the flags, whose design, variety and admirable execution have been praised.

The initiators of Old Flanders, first and foremost Mr. Maurice de Smet de Naeyer, did not give free rein to their imagination in this synthetic reconstruction of the small town of the past. Each building and each house was chosen after a careful selection of the architectural beauties of the Flemish country; each of them was, as far as possible, a faithful reproduction of an existing or demolished building. They were chosen from the most characteristic types of Belgian, French and Zeeland Flanders.

The Old Flanders district covered an area of more than four hectares and had two entrances, one on the outside and one on the inside of the exhibition.

The latter was oriented towards the Military Avenue; it reproduced the entrance to the former Great Beguinage, built in 1660 and demolished in 1878; on either side were the Penshuizekens, 16th century tripe houses, which stood next to the Great Butchery of Ghent, later demolished and rebuilt by the Ghent Monuments Commission.