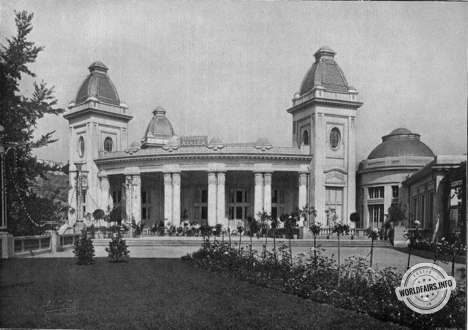 The last of the major horticultural events at the Ghent World Exhibition was devoted to Floriculture, Chrysanthemums, Pomology and Market gardening.

The Autumn Floralies were held in the warm greenhouse (6,000 metres) of the Festivity Palace, which was not as large as the Spring and Summer Floralies. The general managers had reserved the large hall for the awards ceremony, the final event of the World Fair. The Floralies hall was used as a passageway for the royal procession; one could not have dreamt of a more prestigious or Ghent-like setting.

This time again, the premises put at the disposal of the organisers lacked space; the contributions exceeded the most optimistic expectations; some important participations had to be restricted and sometimes crammed in. The whole event was superb, thanks to the presence of Chrysanthemums, whose gigantic flower heads, varied colours and considerable masses dominated all the other entries; never, according to Mr. François Burvenich, had such a quantity been seen in an exhibition; five thousand Chrysanthemums gave the autumn flower show its seasonal character.

Foreign entries rivalled those of Belgian amateurs and professionals. Besides Mr Vilmorin-Andrieux from Paris, who won the grand prize, Mrs Théophile Morel from Westgaver was awarded a special prize for her remarkable collection.

The orchid contributions were important; the main orchidophiles were represented by elite plants highly appreciated by amateurs; some lots of orchids cultivated for cut flowers formed marvellous bouquets; their fine and delicate colouring, as well as their extremely varied forms always charm the visitors of a floral exhibition; one always rushes in front of these capricious princesses of the vegetable kingdom.

The pomology and market gardening sections exceeded expectations in terms of quality and size. The French and Belgian entries were considerable.

Considered as a whole, the hall comprised two distinct parts; between the fruit stalls, where pears, apples and grapes mingled with market garden produce, tastefully arranged parks brought together all the riches of autumn flora; On the one hand, there were chrysanthemums, dahlias and carnations; on the other, bulging leeks, onions, turnips, celery, huge cardoons, potatoes with variegated skin, aubergines, squash, pumpkins, etc. ..

At the back of the hall, tables carried the floral harvest extending to a mound of lying tree trunks surrounded by palm trees, covered with orchid plants from the Pauwels firm; this original presentation showed them as they are offered to the researcher in the tropical forest.

The success of the Autumn Floralies was complete; they responded to the feeling of the crowds; flowers are cherished in Flanders; they are not only in this country, as a French writer said, the passion of an elite; they are like a necessary habit in the eyes of the crowd; they are not only a favourite luxury, but one of the riches of the nation; they are one of its oldest traditions.

We are pleased to record here the testimony of the horticultural press. "For the third time, in the space of six months, in the good city of Ghent, Belgian horticulture has just asserted itself with a mastery that has delighted the many visitors who came to contemplate both the riches of Flora and those of Pomona, set in the colourful setting provided by the market garden production. We tell the people of Ghent that they are entitled to sincere praise, well-deserved congratulations and the warmest applause.