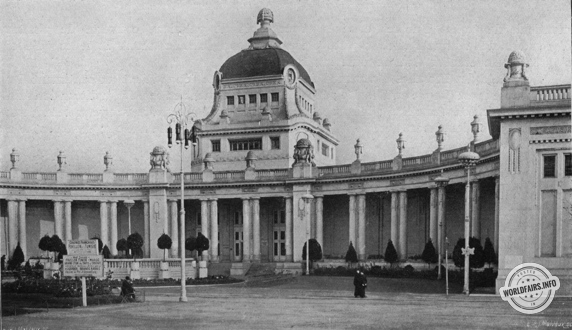 The organisers of the Ghent World and International Exhibition had reserved large areas for the Fine Arts group. The section devoted to modern works included no less than two palaces. The first, enormous one, called the Palace of Fine Arts, housed the classes of Painting, Sculpture, White and Black, Medal Engraving and Miniature; the second, almost as large, was assigned exclusively to the class of Architecture.

Not all foreign schools were represented in Ghent in the form of collective groups. Only Belgium, France, Holland and Great Britain had separate compartments; but international sections, organised in each class, received individual entries from a large number of artists representing almost all European schools, all forms of art, and all current aesthetic trends.

The Palais des Beaux-Arts itself comprised no less than forty rooms, which were generally very large and monumental in appearance. The Belgian Section alone occupied twenty-one of them; a commission appointed by the Belgian Government, in accordance with the proposals of the General Commissariat and the Executive Committee of the Ghent Exhibition, in agreement with the office of the Royal Society for the Encouragement of Fine Arts of Ghent, had been entrusted, under the direction of the group's commissioner, Mr. Paul Eambotte, director at the Ministry of Science and Arts, with the general organisation.

The jury of the Painting class, considering that the Ghent Exhibition - universal and international - should not be limited to a special exhibition of modern Belgian art in the form of a simple triennial show, had wished to bring together characteristic groups of works by artists who were particularly representative of the most individual and freshest tendencies of the School.

Thirty-six artists, not counting the members of the jury, were chosen. Special invitations were sent to them. They were allowed to exhibit a maximum of eight works by right, but not more than fifteen metres of gallery space.

The Jury had chosen the hangings for the rooms dedicated to Belgian painting. A thick beige cloth covered the walls; linoleum covered the floors; and
floors; velums surmounting a light white cheesecloth frieze formed the ceiling. This very neutral ensemble was arranged so as to concentrate all interest on the works on display, from which no extraneous detail should distract the visitor's attention. Although expensive, this austere and cold arrangement was not very favourably received. The luxury of the presentation of the French Section, contiguous to the Belgian Section, conceived according to a diametrically opposed bias, was in general more appreciated. The painting class offered no retrospective ensemble. The great Belgian artists who had died in recent years were not represented. This had been the wish of the jurors.

The presentation of the French Section, organised in Paris by special invitation, under the high direction of the Under-Secretary of State, Mr LéonBérard, and his collaborators in the Fine Arts Department, Messrs Valentino and Seguin, had been entrusted to Mr André Saglio, Commissioner of the Fine Arts Exhibitions of the Republic, and delegate of the Commissioner General. Mr. Horteloup, Deputy Commissioner, and Mr. H. Fritsch-Estrangin, Secretary General of the Section, lent him their devoted support.

The method of presenting the works of art devised by Mr. Saglio was based on a point of view diametrically opposed to that of the Belgian jury. Your paintings were not placed on neutral and unnoticed backgrounds; on the contrary, they were part of arrangements in the middle of which they simply fulfilled a decorative role that was somewhat complementary. The harmony of the whole took precedence over the enhancement of the individual piece. The majority of the rooms, with their silky lime damask walls, were covered with mahogany woodwork. A silver-grey carpet with a wide dark brown border covered the floor. Soft purple velvet seats added a muted, sumptuous touch. Elsewhere, Rambouillet canvases, with large multicoloured designs on light and fresh backgrounds, adorned the walls. Everywhere, delightful canopies, painted by the decorator Jaulmet, of garlands, laurels and roses, formed ceilings. They were suspended and curved with perfect art; the design of the coloured ornaments marked a sort of nervous architecture among these floating canvases.

Oil paintings, cartoons, watercolours, drawings, prints, works of sculpture and display cases of trinkets and medals were mixed in the French rooms in a varied, picturesque, amusing ensemble, very new and unexpected in appearance, perhaps a little disconcerting by certain innovative audacities, but whose sure and delicate taste had always disciplined the imagination. The French section occupied ten rooms, several of them huge.

The flower of the artists currently in the limelight in the school was represented there. The State collections had been largely used for this purpose.

The Dutch section was organised under the auspices of the Commissioner General of the Netherlands, Mr. Ph. Stuart, by a commission composed of Prof. Bart van Hove, chairman; Willy Martens, vice-chairman; R. Ives Browne, secretary-treasurer; and the members Prof. J. J. Aarts, C. Breitten-stein, A. M. Gorter, A. Salm It occupied three rooms in the Palace of Fine Arts, adjacent to the Belgian rooms.

The exhibition was notable for the serious, sometimes somewhat austere and darkened appearance of the works in it.

The British compartment was an unofficial initiative. It contained a selected group of paintings and sculptures that summarised the current trends of the English school and the Scottish group.

As for the International Section, which included items from Spain, Italy and the Grand Duchy of Luxembourg, and grouped the work of a number of cosmopolitan Russian painters living in Paris, North and South Americans living in Europe, wandering Scandinavians and die-hard Poles, it offered the exotic and mixed flavour that comes from unexpected combinations.

The sculpture section had been created, under the presidency of Count Jacques de Lalaing, by Messrs Jules Lagae, Victor Rousseau and Charles Samuel.

Thomas Vinçotte, K. Rombeaux and Count Jacques de Balaing, although especially solicited, had to abstain from participating in the Exhibition. On the other hand, Mr.
Aronson Naoum, a Russian sculptor living in Paris, had sent a whole series of his works; in short, in the foreign sections, statuary was perfectly represented.

The Belgian sculpture section had 198 entries. The main hall of this section, with its charming architecture, yellow damask panels, filled with a host of groups, statues and busts, was the setting for all the official ceremonies, receptions, speeches, etc.

The engraving and drawing class was organised, under the presidency of Mr Bouis Benain, by Messrs Marc Henry Meunier, Armand Rassenfosse and Armand Heins.

An important set of works by the late S. A. R. Madame la Comtesse de Flandre occupied the centre. The prints of the late Princess, a great patron of the arts and artists, were the main attraction of this compartment. Around them, the works of Aug Danse, Jules De Bruycker, Alfred Delaunois, James Ensor, Armand Heins, Fernand Khnopff, Bouis Benain, Marc H. Meunier, Armand Rassenfosse and Marten van der Roo, who were specially invited, and those of 59 artists selected by the Jury, attracted a lot of attention.

In the international section a special mention is due to the lithographs of Mr. Joseph Pennel and the members of the Senerfelder Club of London, which were of a quite eminent quality.

The Miniature and Medal compartments, subdivisions of the painting and sculpture classes, were of great interest to amateurs and specialists.

The collection of modern miniatures assembled by Countess Jean de Mérode and Messrs Louis Moreel and René Steens was a great success. It was perfectly arranged among charming furniture and trinkets. Some rare entries, which appeared for the first time in Belgium on this occasion, were particularly noted, notably the portraits of Mr. J.-W. von Rehlig-Quistgaard, a Danish master living in New York, those of Miss Caroline Bailey and Mr. Carlo Jeannerat.

The collection of medals was of considerable importance. Messrs A. de Witte, Jos. Casier, Victor Tourneur and G. Brunin had succeeded in obtaining the participation of a very large number of foreign and Belgian artists, representing all the schools not only of Europe but also of the world, since not only the United States of America, but even Brazil and Japan were represented.

The first International Art Medal Exhibition was organised in Brussels in 1910. It was a welcome innovation. It was the first time that the engraving of medals was clearly separated from sculpture. The favour that greeted this subdivision has encouraged all organisers of Fine Arts exhibitions to maintain it from now on. In the same way that each painting exhibition should now include a miniature cabinet, each sculpture section should contain, as an appendix, a medal cabinet. The one organised in Ghent was of great importance.

As M. Tourneur pointed out in the introduction he wrote for the special catalogue of the International Medal Exhibition, "the organisers have endeavoured to bring together as many specimens as possible of the best productions of medal engraving from all the countries where it is practised. On the one hand, the public will find matter for comparison; on the other hand, the Salon will allow artists to see the various ways in which their art can be understood. Indeed, the conceptions of medal makers are profoundly different according to the countries to which they belong and the means of execution they use. So do not expect to find only masterpieces at the Salon; the greatest tolerance has been practised in order to allow artists in whose homeland the art of the medal is little cultivated to show what is done in their own country. The interest of the Ghent Salon therefore lies above all in the quantity and variety of the works exhibited. "

Finally, the Architecture section, with its extensive space, organised under the presidency of Mr. Modeste Denoyette, by a jury composed of Messrs. Jules Brunfaut, Victor Horta and Oscar Van de Voorde, was presented in a less arid and less dry form than usual.

Some of the most illustrious foreign architects, who had sent retrospective ensembles, added to the interest of the exhibition.

I would like to mention in particular the participation of the Dutch master Cuypers, a number of French architects in the spotlight, and some personalities in the International Section.

The success of the Beaux-Arts exhibition was not consecrated by great prizes, medals or diplomas.

In fact, as was the case with the French artists, all the participants in Group II had been declared "hors-concours" beforehand and automatically. However, the large number of visitors, the large number of works acquired for museums or private collections, and the flattering articles by the best art critics at home and abroad eloquently underlined the effort and the importance of the competition.