Permanent Museum of the Colonies - 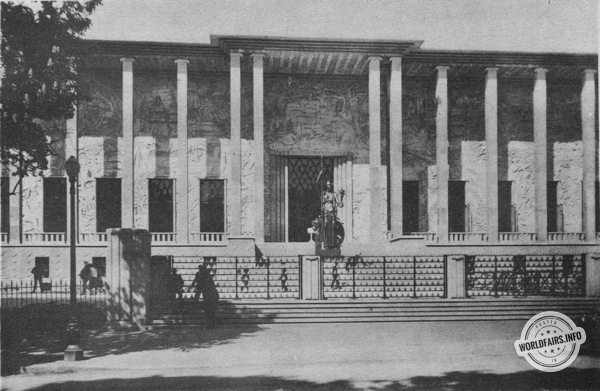 It is the only monument that will remain from the Colonial Exhibition, at the very gates of Paris. Witness to this grandiose event will be the Musée des Colonies, the Palais des Colonies that we were missing. Its lines are part of the audacious lightness that reinforced concrete allows and which go against the laws of stone, made of balance,
and of strength and logic. But this allows for an arrangement of voids and volumes that contributes greatly to highlighting the nobility of the ideas, the grandeur of the images that the Palais should house. In the same way, the straightness of the lines gives a sense of discipline, just as their severe momentum marks the sense of our colonial effort as it should be conceived. Surfaces replace masses.

It is precisely the surfaces that first of all speak to us when we contemplate Janniot's great bas-relief. On this page in Poitou stone, the sculptor has written the economic history of the Colonies. It is an immense and precise work; it has never been surpassed, even by the grandiose mural scenes of ancient Assyria. None of these pseudo-humanitarian allegories that baffle the mind, but the surprising life of plants, animals and men from afar; but the gateways where the colonial goods end up: Marseille, Bordeaux, Le Havre, Saint-Nazaire, Nantes, Dunkirk and even Le Bourget, the aviation port. Peace, Abundance and Prosperity dominate this whole movement. They have replaced the themes of the Conquest. The muscles of the Africans, the Indochinese and the Madagascans are not the muscles of slaves building necropolises or temples, but the muscles of well-fed people who ask the earth, under our aegis of peace, for the riches it lavishes on the surface or which are hidden in its depths. The style of the whole work is both grand and familiar, on a par with the edifice built and consolidated by these distant men who are French of every colour. You will not fail to be struck by the power of the colonial idea capable of inspiring a powerful art, from which has fortunately disappeared that bazaar orientalism which, only yesterday, made it an outcast from true art.

The Musée des Colonies houses two large sections for the duration of the Exhibition: the Synthesis Section and the Retrospective Section. The former presents a synthetic view of our colonial efforts in all fields since 1870; the latter retraces the periods of our colonial history.

The Retrospective Section naturally groups together all the paintings, manuscripts, prints and souvenirs relating to a thousand years of French expansion in overseas countries from the Crusades to the present day. Explorations, discoveries, conquests, the gentle way of life in the Creole islands, the influence of the colonies on our art and fashions in the 18th century and the
and our fashions in the 18th century and today, land and naval scenes: everything contributes here to give you a powerful and condensed lesson in colonial history. The projections and the sound film will help you to understand, in a short time and with pleasure, all the greatness that emerges from such memories, gathered here for the first time.

Do not hesitate, dear Visitor, to retrace your steps. Just as travel enlarges your life in space, the past is capable of enlarging your life in time, especially when it is made of honour and prestige.

On the mezzanine and the first floor is the Synthesis Section, a summary and synoptic table of everything you have seen, everything you have liked and been interested in, everything you will come back to see and show to your children at the weekend or during the Sunday break. A modern museum in which the objects, spaces and people will be welcoming and familiar to you.

The entire first floor is devoted to this. Here are the general arrangements: the staircase on the right leads to the History of our colonies: this is the formation of the contemporary colonial Empire, the work of the Third Republic.

On the landing, the epics of Tonkin are recounted. The Gallery on the front contains the history of the conquest of Madagascar; that of West Africa, patient and hard
Africa; that of equatorial Africa, more peaceful. A triptych illustrates the famous African "rendezvous" at Lake Chad, unique in colonial history. The rotunda recalls the events that gave us our place in Tunisia and Morocco, and those of the Saharan penetration.

In the right-hand gallery are the works of Social Assistance.
The phases of the fight against disease are exhibited here. What misery and suffering are hidden behind these names, which are almost unknown to the public or which are indifferent to you, and which designate certain dreadful scourges: plague, cholera, malaria, yellow fever and sleeping sickness!

And then there is Education, both academic and professional, completed by the work of the "Missions".

In the right side gallery, the Public Works made to astonish a part of the French people who, badly enlightened by a false exoticism, still believe in the complete savagery of their distant provinces.

The back gallery and the circular gallery contain the entire inventory of colonial production: the wealth of the forest, the shrubbery of the "savannah", the annual produce of the fields, rich crops (vanilla, coffee, cloves), to which are naturally added the products of animal husbandry, from beef to silkworm, and the mineral wealth of the subsoil.

The left side gallery is decorated with colonial woods, which have replaced the woods of the islands, but at a lower price.

To preserve these riches and protect the men, the Colonial Army shows us the collaboration of its serene force. It also shows us what we owe to the devotion of the natives during the Great War. Finally, the Navy happily completes this ensemble by ensuring our communications.

In the rotunda, we find Tourism, followed by the Merchant Navy and the Library, enriched with colonial medals and coins. Part of the mezzanine floor contains Colonial Prehistory and Ethnography, the indigenous arts with their utensils, fetishes and weapons.

Finally, if you go down to the basement, some real attractions await you. These are the different modes of transport illustrated by images and dioramas.
Navigation, cars, aviation, the future Trans-Saharan, what else? And all of this should help you to move around our colonial empire, so clearly indicated on this world map, which is installed in a luminous basin and which situates our multiple position on the globe.

Before going back up, you cannot help but admire the riches of our colonial waters. This magnificent semicircular aquarium reveals, among other wonders, the mysterious inhabitants of our tropical seas.

As you can see, dear Visitor, this "synthesis" was necessary. Each of our colonies has told you about its past, its aspirations and its place in the world and national economy.

Here, the line is continuous, the drawing is general: the essential elements of these fragmented inventories have been grouped together to enable you to see the sum of power and honour that the total of colonial activities represents for you.