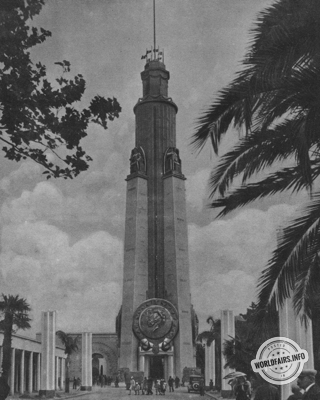 Here, our three colours are raised to a height of 82 metres on a bronze tower which also supports a lighthouse. Inside, the busts of the great colonial soldiers are grouped together, and their names are inscribed on the walls: synonyms of tenacity, names of men who have broken the wills of those who were against France and humanity. The numbers of the regiments that contributed to the pacification of peoples on all continents are engraved in marble.

In the centre, you can see the flags and standards of the colonial and North African troops who have distinguished themselves in particular. Under a dome ceiling, in old gold mosaic, a Glory spreads its wings over all these valiant soldiers.

A double staircase leads to the top of the tower. Every evening, the native troops from all countries will salute the colours, showing that we have made them our best auxiliaries.

A special room, next to the monument, contains all the details of the work of the colonial army and its services. These works and services are not exclusively military, since the officer, and even the non-commissioned officer, were often builders, judges, instructors and educators.
The air force, which is the weapon of the future, both a police force and a rescue service, has a special place here.

As for the Health Service, it deserves a special mention. Its doctors know neither friends nor adversaries: tirelessly, they have bent over human suffering: they have contributed mightily by their ardour and their disinterested science to the routing of evil, greedy and fearsome sorcerers.

Enter the opposite pavilion, and you will have the chance to hear one of the hundred lectures that are given during the Exhibition. If the hall is full, review, without the next room, the soldier's hostels, the hygiene and sports halls which are assigned to the young men who serve far away. In the most remote places, there are shelters for moral comfort, meeting rooms where the soldiers can enjoy themselves in a healthy and comfortable way.

The colonial army thus participates in the great lesson of things that is given to you. It evokes here the work accomplished by its great elders; it glorifies the daily and fruitful task of its officers and soldiers, scattered between the two tropics. All those who have served in its ranks, and I am one of them, have retained a legitimate pride.