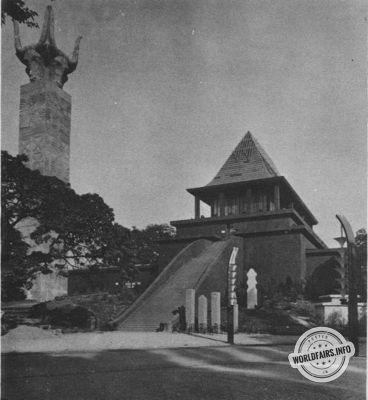 In the grandiose setting of the colonial event in Vincennes, the Great Island occupies a special place where it shows, in the favourable light of the verdant décor which adorns its palace, the faithful and sincere image of all its present active forces and its reserves of production power for the future.
It is the synthesis of all the efforts of the past completed by the promises of tomorrow that the pavilion of Madagascar wanted to represent.

As they browse through the participation of the Big Island, one of the most beautiful and endearing of the colonial participations, visitors will realise the immense progress made in this country under the energetic and creative impetus of both Governor General Cayla and his predecessors since Galliéni.

The high direction of the section has been entrusted to Mr. Gaston Pelletier, the very distinguished director of the Economic Agency of Madagascar, who joins to his high functions, eminent artistic qualities that everyone can admire, and guiding principles masterly stated in the beautiful book of doctrine that he has just written in collaboration with Louis Roubaud: "Images et Réalités Coloniales".

Mr. Gaston Pelletier, Commissioner, was joined by Mr. Camille Bruand, Chief Administrator of the Colonies, who was both the organising spirit and the linchpin of this exhibition, and whose efforts were of great value; and Mr. Georges Borrel, who was more specifically responsible for the propaganda events.

To establish the project, we drew on the collection of documents that Mr. Pelletier made available to the Exhibition's organizers. The work of the Malagasy Academy was of great help in finding one's way through the maze of archaeological origins.

The Imerinian population is, without doubt, the most evolved and it is in their artistic manifestations that we find the best inspirations. A strong aesthetic impression is made by the Imerinian tombs. Their rectangular plan, their superimposed terraces, with large simple lines, make them well-proportioned masses that recall the Egyptian mastaba, with the concern for elegance that strangely links them to our modern architecture.

Alongside these massive constructions made of granite and red earth, there is an extremely curious wooden architecture. The most characteristic type of this architecture is the Andria-napoinimérina hut in Tananarive.

Colour plays an important role in Malagasy aesthetics. In the construction, the red colour of the "laterite", an iron oxy-carbonate whose reflections form a powerful contrast with the rich vegetation of the country, dominates. In Vincennes, the buildings of the Madagascar colony are clad in this characteristic colour.

The main pavilion of the Big Island was designed by the architect Veissière, whose plans were fortunately executed by the company Pollet & Vachez, and more particularly by the sub-engineer Lescuyer.

Mr. Gabriel Veissière was able to recall, in an evocative setting, the sober lines of the royal palaces of the Hova dynasty by reserving the interior fittings in harmony with the conception of modern decorative displays.

Each element of this architectural ensemble, considered in isolation, holds the attention of the visitor who is interested in archaeology, ethnography and decorative art. But one cannot help admiring the guiding thought behind the layout of the Hova palace, its monumental tower, the Malagasy restaurant and theatre, and the indigenous city built on the shore of Lake Daumesnil. These buildings, skilfully distributed in a limited space, are all in their proper place in the general plan of the Exhibition.

The Palace itself covers 3,000 metres and was built without cutting down a single tree.

On the ground floor is a large conference room, with gold bases and ceilings, of the richest effect. Here we notice the two beautiful panels by the great artist Raymond Lévi-Strauss, who, under the symbolic pretext of the arrival of the first Frenchmen, the Dieppois Digard and Cauche, in Madagascar in 1638, wanted to evoke the alliance between France and the Big Island, the latter representing its natural riches, the former bringing in return the example of its techniques and the spirit of civilisation.

On the left, General Galliéni receives the homage of the representatives of the different Malagasy races and gives them the French law. In the background, the image of the soldier ploughman illustrates the colonial conceptions of the Great Chief. Then there is the indigenous market, which is evoked by the four symmetrical foregrounds that follow one another along the length of the picture: the ilang-ilang, the coffee tree, the vanilla tree not far from the rice-packers, and the tobacco.

The material achievements then find their place. Major works are being carried out to build a port near the natural resources: in the distance, we see the sand washing machines on the banks of the gold-bearing streams.

The right-hand side of the painting summarises this immense effort, both spiritual and technical. Just as in the other painting, the artist has given a symbolic pretext, but in contrast with the ancient subject, it is here the Paris-Tananarivo air link that he wanted to represent. In the crowd that crowds around the cinema, the car and the radio, among the Malagasy sportsmen and cyclists, the newspaper seller, one recognises in his uniform Lieutenant Bernard, glorious pilot of the first France-Madagascar raid.
The other two panels are by M. Gaboriaud who developed his great art with fanciful subjects, full of life in Madagascar.

Then comes the great hall, an immense nave, where visitors can admire four dioramas of a striking naturalness.

This beautiful work, which takes visitors on a real journey through the main towns of Madagascar, is the work of painters Mrs. and Mr. Henry Cayon.

We then enter the exhibition itself, crossing the main hall, where we can see some beautiful paintings of a happy effect, and the models presented by the Direction des domaines de Madagascar. They are executed in scales large enough for the smallest details to be shown.

Everything that has to do with the production of the soil and subsoil, the plastic or industrial arts, ethnography as well as the natural sciences, history or geography is condensed in the most lively forms in the main palace alongside the synthesis of French activity and private exploitations. There are many dioramas, decorative paintings and particularly vivid graphic diagrams.

A grand staircase leads directly to the two floors of the building. Two vast galleries house the numerous specimens that summarise or illustrate the production of the Malagasy soil and subsoil, hunting and fishing; the plastic and industrial arts, ethnography, geography and history of the Big Island.

The film and photography have made the silhouette of the monumental tower of the bucranes familiar to the public, boldly profiled against the sky and visible from many points in Paris.

51 metres high, finished with four zebu heads, this tower rests on a reinforced cement base of 250 cubic metres. It symbolises the sacrifices and Fortune of the Island and dominates the entrance to the Exhibition.

It should not be forgotten that the ox has an essential place in Madagascar, like the cow in the Indies. It is interwoven with the native religion and superstitions, and is a great source of wealth for the farming population.

The considerable mass of the bucrania tower can resist the thrust of the most violent wind, which is estimated at 600 ton-force. From a technical as well as an architectural point of view, the Madagascar Tower deserves to be considered as one of the wonders of Vincennes.

On the edge of the lake, in the foreground of the Palace, stands the indigenous city, built in a rustic setting reminiscent of the intermediate region of the high plateaus. This picturesque village is home to a whole population of merchants and craftsmen belonging to the various races of the island, who sell the product of their work there.

Let us also say that the natives of Nossi-Bé pilot several authentic outrigger dugouts on the Daumesnil Lake.

Also along the lake, a bar-tasting room and a restaurant welcome gourmets who wish to know the flavour of Malagasy coffee and cuisine, which are too often ignored by the mass of consumers.

Finally, let us mention that the Palace has a Malagasy theatre and a cinema where films evocative of the mysterious island, shot on the spot by the best filmmakers of the French film industry, are permanently shown. On the other hand, a Malagasy troupe composed of 5 actresses, 7 actors, 2 pianists, and 17 dancers, singers or musicians is the object of warm applause from the public every day.

To make the great island even richer and more beautiful by multiplying all the links which already attach it to the mother country; to make it better and more accurately known to all our compatriots and especially to all French energies: this is the true mission which Mr Gaston Pelletier and his collaborators have marvellously accomplished in Vincennes.