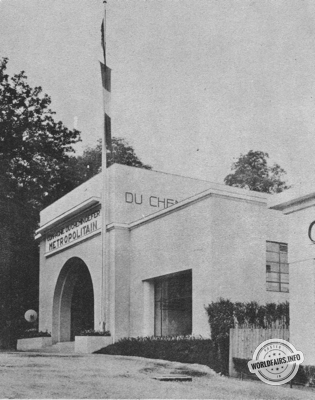 The Paris Metropolitan Railway could not remain a stranger to the Colonial Exhibition, for it was thanks to it that the majority of visitors were transported without fail, with the number exceeding 500,000 in fifteen hours on certain days.

In its Pavilion, the Metropolitan Railway presents models of its main structures and its current equipment (rolling stock, signalling, etc.). On large-scale maps and charts, the visitor can follow the prodigious development of the "URBAN METRO", which in 1930 carried almost NINE HUNDRED MILLION passengers, and whose traffic intensity is now the highest in the world: 7,700,000 annual passengers per kilometre of two-track line.

On a large-scale map of the suburbs, we can see the 16 branches of the "SUBURBAN METRO", whose work has begun and which will extend outside the city the advantages of punctuality, safety and low cost that only transport by the Metropolitan system can provide.

These graphs and maps show the necessity of the "REGIONAL METRO" whose high performance transversals will be the arteries of the "GREATER PARIS". Run by the powerful standard gauge equipment, the model of which is on display, these transversal lines will distribute the workers of the greater suburbs throughout the city at a rate of over 50,000 per hour in each direction.

In a cinema, permanent projections allow visitors to participate in the intense life of the Metro. Graphics and bright photographs on the walls of this room show the great effort the Company has made to develop social works for its staff: holiday camps at Ménétreux (Côte d'Or), Ruffet-sur-Seille (Jura), Beauvais-sur-Matha (Charente-Inférieure) where already 500 children of the staff go each year to soak up the fresh air of the countryside, and the rest home at Ménétreux for convalescent staff.