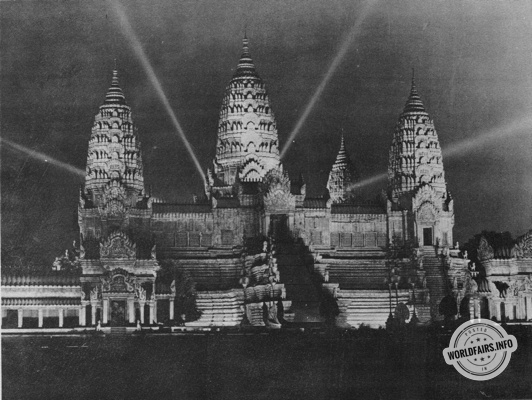 At the end of a long paved roadway stands one of the marvels of the Exhibition: the reproduction of the central mass of the Angkor-Vat temple, with its vertical staircases, its galleries arranged like cloisters, its four corner towers and its central dome.

It is a true masterpiece of Khrnère architecture, which the great artists who are the architects of the Palace, Mr Charles and Mr Gabriel Blanche, father and son, have faithfully reproduced.

Five domes crowned with serrated tiaras rise into the sky at 50 and 60 metres.

Above a square base measuring 70 metres on each side and 14 metres high, subdivided internally into two floors, rooms and galleries enclose four spacious and cool inner courtyards and the sacred sanctuary that houses the main dome.

Outside, a 120-metre-long enclosure gallery, flanked by towers, opens in the middle, in line with the Great Staircase - the staircase leading to the temple sanctuary - and the esplanade. The proportions and decorative details of the building have been reconstructed with absolute accuracy by means of on-site surveys.

No other monument expresses more harmony and thought at the same time. None is more appropriate, by the majesty of its lines and perspectives, by the grace of its lacework, its fine columns, its elaborate friezes, to our aim of symbolising in the grandeur of its past, the prestige of our Far Eastern land. A poem of stone, an ideal of pure spirituality where the aspirations of Asia and the symbolism of all oriental cults are penetrated and reconciled.

In this enclosure and under these vaults, the General Government of Indochina wanted to glorify the French policy of labour and concord associating to its ends the races it protects and which collaborate with it in the common work.

The interior of the palace is appropriate to its purpose, with spacious corridors and twenty-three rooms bathed in air and light, where the eye first grasps the layout before stopping to consider the details. The visitor is presented with the most complete and striking inventory of the economic activity and collective life of the five EU countries.

On the ground floor, covering an area of 5,000 square metres, including its annexes, the Economic Exhibition presents all the signs of agricultural, commercial and industrial prosperity. The main resources of the soil and subsoil are judiciously selected and methodically distributed, in their raw and manufactured state.

The grouping is presented with the constant concern to bring together production and exploitation, the raw material and the processes that use or transform it, the individual efforts and the mechanism of the administrative machinery that has the task of helping them to improve their technique and performance.

The general services, public works, merchant navy, public transport, aviation, present an overall picture of the major works carried out or simply planned for the development of commercial ports, the protection and fertilisation of the countryside, the development of equipment, its means of transport and communication.

The building is subdivided internally into two floors, which an ingenious device of glass blocks, linked together by an invisible concrete net and forming a luminous vault, illuminates, like an immense glass roof, without any opening being made in the base. The upper floor supports a set of porticoes, galleries and pavilions enclosing four interior courtyards and, at the intersection of two large bays, under the main dome, the chapter house, corresponding to the Temple sanctuary.

The rooms on the first floor group the manifestations of the social and intellectual activity of the colony. It is precisely the honour of our country to have applied the most attentive and enlightened solicitude to the study and solution of the social problems which arise in Indochina.

Protection of children, the elderly and the incurable, organisation of clinics, hospitals, dispensaries and maternity wards, Pasteur institutes and laboratories, medical inspection of building sites and plantations, control of the workforce, measures taken to clean up the towns and improve the physiological conditions of the indigenous habitat. All the evidence is accumulating of our humane and beneficial action in the field of health.

The reproduction of the temple of Angkor surrounded by the different pavilions of the five countries of the Union seems to be the moving symbol of this tutelary role of France in Indochina. With majesty, with grace, the Angkor Pagoda is there at the centre of the Exhibition as if to testify to the world that French peace in the Far East is not an empty word: France honours the past and respects customs while improving the conditions of the general economy.

The great scientific institutions1! assembled the results of their work. The French School of the Far East, in particular, exhibited its magnificent publications and a few museum pieces and archaeological leaves. Do we know that it is to the latter that Indochina owes the discovery of the incomparable relics of its past, dug out of the ground, torn from the forest. All manifestations of intellectual and artistic activity are welcomed in Vincennes, whether they come from official institutions or private groups.

The best productions of local French art and indigenous arts adorn the salons with an appeal that is both retrospective and modern. Salons of French artists from Indochina, painters, engravers, sculptors, architects, decorators. Salons of indigenous art where our young school of Fine Arts in Hanoi and the schools of applied art in Tonkin, Cambodia and Cochinchina exhibit their most beautiful creations: furniture, bronzes, ceramics, inlays and lacquers, goldsmiths' wares, fashioned silks, paintings, engravings and drawings, in which the original style of the race and of the country is reflected while adapting to new needs. This flowering illustrates the inspiration drawn by our own artists from the Far Eastern sky and the artistic impulse that they communicate to those around them, the rebirth of a national classicism whose traditions had degenerated.

The rooms and galleries on the upper floor of the Central Palace evoke the history of Indochina through the ages, from ancient civilisations to modern times. The colony's archives offer us original or reproduced documents, portraits, prints, engravings, maps, which recall the great memories of the past. The mountain races come alive before our eyes with their ethnic types, specimens of their tools, their costumes, their art.

Since May 6, 1931, millions of visitors, French and foreign, have climbed the steps of the temple that the Kmers have erected in honor of the god Vichnu. However, if the public admires without reserve the work carried out, it is generally unaware of the patient efforts which led to this marvellous reconstitution.

Without going into dry technical details, let us say that Mr Charles and Mr Gabriel Blanche devoted six years of patient work to the reconstruction of the Angkor Temple. Their task required a great deal of difficult preparatory work and, in particular, the gathering of considerable documentation.

Let us add in passing that the architects of Angkor are also the authors of the causeway leading to the monument as well as several pavilions that make up the Indochinese section and which, although very diverse, give the entire section a harmonious whole.
Mr Gabriel Blanche was asked by his father to go to Cambodia to get his documentation from the source. He brought back archaeological surveys and watercolours which enabled him to give the replica of the Temple built in Vincennes this patina which seems to be thousands of years old, so much so that it reproduces the exact tones of the original monument.

The total volume of the mass constituted by the Temple and its annexes is, more or less, that of the Sacré-Coeur of Montmartre.
The reconstitution of the Angkor-Vat Temple in Vincennes cost 12 million 400,000 francs, a relatively modest sum in view of the scale of the work carried out.