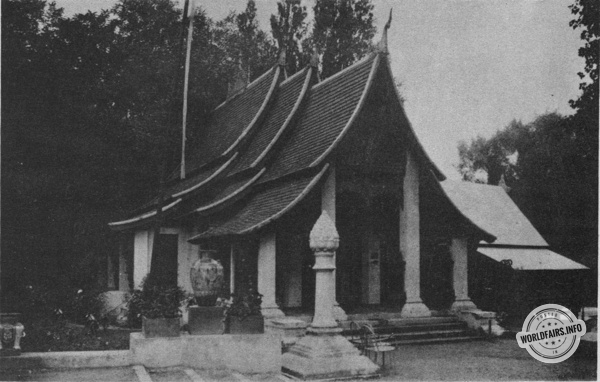 The Laos Section at the Colonial Exhibition appears to the public under the aspect of a religious group around which are scattered, according to the Laotian custom, several indigenous dwellings in which evolve daily under the eyes of the visitors, craftsmen, musicians, singers who thus give an extremely picturesque note to this exhibition whose essential goal is to evoke the indigenous life in its various manifestations.

The religious group alone, which has been very happily created, cannot fail to attract the attentive admiration of all those who are attracted by the charm of the old temples of the Far East, so full of grace and mystery at the same time.

The one that has been built is precisely the replica of one of the oldest pagodas of Luangprabang, the Wat Xiengthong, whose graceful and original architecture is a charm for the eyes. Religious frescoes adorn the peristyle.

Inside the sanctuary, visitors can admire beautiful Buddha statues of various sizes, precious religious objects and see Lao monks practicing the religious rites of their country.

Close to the temple, the public will be struck by a small pavilion unique in its kind by the very originality of its architecture: it is the reproduction of the Religious Library of Sisaket (Vientisne) where the manuscripts and holy books of the main temple of the capital of Laos are kept.

Next to the library and a little behind the pagoda, a chapel is built where the monks go to meditate.

Finally, on the north side of the section, visitors pass under a very curious door in the purest neo-Burmese style which gives access to the religious group.

This lively evocation of a village, with its pagoda, its monks still intimately involved in the life of the natives, its craftsmen, is not the only attraction of the Laos section.

In the same enclosure, there is an exhibition pavilion, built in the Laotian style, where curious jewellery, fabrics and Laotian silks in shimmering and rare colours are exhibited, which will delight the visitors.

In this same room, paintings made in Laos by Mrs. de Fautereau are exhibited. She has taken various scenes of native life, which will be very useful to complete the visitors' documentation on Laos.

Thus composed, on the edge of Lake Daumesnil, which adds to its picturesqueness and charm, the Laos section of the Exhibition will not only be an object of legitimate curiosity for the public, but also an education.