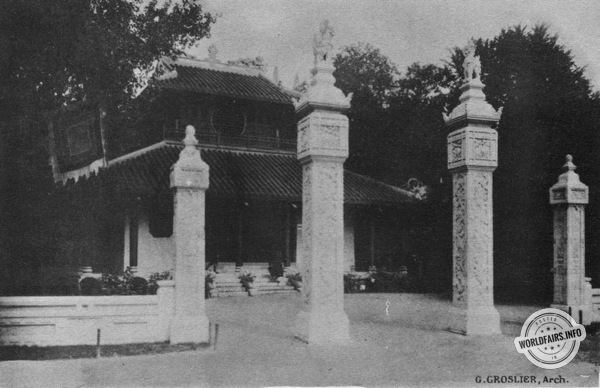 The particular exhibition of Annam includes :

1° A decorative entrance portico (replacing the door which could not be executed) where a guard of honour in local costume (red and yellow) with arms and flags will be held;

2° A small square pavilion, a reduced reproduction of the Quôc-tu-Giam in Hué. This pavilion is dedicated to the Exhibition of the Court of Annam. It contains in the centre the statue of H.M. Khai-Dinh, a replica in gilded and patinated plaster of the work of the sculptor Ducuing which adorns the tomb of the Emperor in Hué, the busts of H.M. Bao-Daiet, of H.E. the Regent of the Empire; the portraits of their Majesties the Queen Mothers and those of the four ministers, columns of the Empire, works of Mme Boullard Devé,

These sumptuous costumes, though of a discreet richness like all that is purely Annamese, are an absolutely faithful reproduction of the costumes of the Imperial Palace. In order to avoid the reproduction of Their Majesties' features in mannequins, they are presented on special red and gold lacquered dress racks.

Two mannequins are dressed in the costumes of the Palace's junior officers.

At the entrance a low altar in red and gold lacquer supports a perfume burner and two candelabras in classical style.
Two screens of photographs on glass show visitors the ceremonies, grand lais, nam-giao, etc., during which the costumes on display are worn.

3° A large rectangular pavilion, an exact reproduction of one of the main Thai-Miêu temples in the Imperial Palace of Hué.

On entering this pavilion, visitors will find on the right a large diorama - 12.5 metres long - representing a continuous panorama of the main sites of the "Mandarin Road" as it crosses Annam from south to north (Phanthiet, Dalat, Nhatrang, Varella, Quinhon, Tourane, the Marble Mountains, the Pass of the Clouds, Hué, the Perfume River, the Imperial Tombs, the Thanhoa) This diorama was made in Annam by the painter Henri Dabadie. A "talking map" allows the exact location of the sites and monuments reproduced in the diorama.

In the centre, a circular diorama presents the interior of two Annamese houses, that of a carpenter and sculptor, and that of a retired mandarin or a wealthy bourgeois, with the reception room and the ancestor's altar. These houses are surrounded by their courtyards and gardens with a street end, a well and a genie tree with votive altar.

Thirty-five 1 metre high figures, the work of the sculptor Hiérholtz, enliven this diorama.

Costumes, furniture, jewellery, accessories of all kinds were made in Hué itself, to the scale of the characters.

On the left, three other dioramas treated with exactly the same processes present the three other races of Annam; Chams, Moïs, Muongs:
Chams: a courtyard of a house on the roadside leading to ancient towers;
Mois: interior of a hut;
Muongs: wedding procession in the mountain.