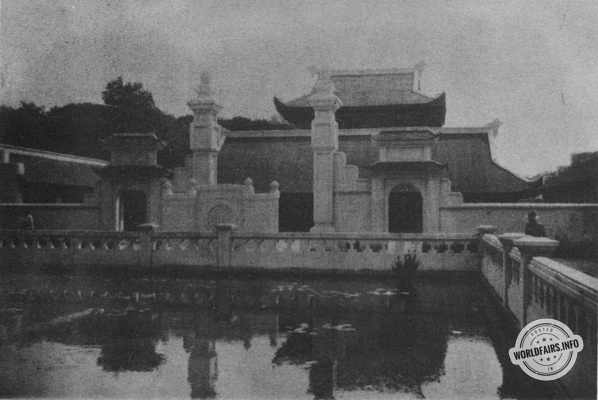 The local exhibition in Tonkin, which was initially intended to be a reproduction of an Annamese village, or at least of the main street and square of a village, so as to accurately represent the special characteristics of this country of the Indochinese Union, a crossroads in which one could see the market, the shops of craftsmen and small traders, as well as the dinh or common house, had to undergo significant reductions for budgetary reasons and also due to lack of space.

The gate of the Annamite village with its watchtower where the watchman usually stands ready to give the alarm signal or to announce the arrival of strangers by striking a tom-tom.

On the right-hand side, in the absence of a complete street, a row of five Tonkinese houses with shops or craftsmen's workshops, buildings in which are installed natives who sell silk fabrics, lace, objects made of tortoiseshell, ivory, copper, inlays, gold or silver jewels, carved or lacquered furniture, the main products of the craft industry and the family industries of Northern Indochina

Once they have passed this necessarily reduced reproduction of a shopping street in a Tonkinese centre, visitors find themselves in the presence of the common house, the dinh, where the village notables meet to deal with communal affairs and also to celebrate ritual ceremonies in honour of the protective genies of this administrative cell, the basis of the country's administrative organisation.

This monument, separated from the craftsmen's houses, which we have just left, by a pool of water surrounded by the low openwork wall made of bricks and glazed terracotta balusters found throughout Tonkin, is the very exact image of the Dinh of Dinh-Bang, one of the most important villages in Tonkin, located in the Phu de Tu-Son of the province of Bac-Ninh, the cradle of the Ly dynasty.

a) The entrance with three doors, the main one of which is usually hidden by a screen, as Tonkinese rites never allow one to see from the outside of a pagoda, or even from a mandarin's yamen, what is going on inside, forcing visitors to make a diversion to the right or left to enter.

b) The inner courtyard flanked on both sides by galleries in which the accessories for the ritual ceremonies are stored, where the villagers who go to the Dinh also stand and take shelter from the rain, cold or sun, and in which eight shopkeepers or craftsmen are also allowed to set up shop and present their products to the public under the same conditions as in the five compartments indicated above.

c) Finally, the main building, consisting of seven main bays 3 metres wide. In the central one is the altar of the genie, preceded by the offering table: this sanctuary is separated from the other bays by two rows of ritual weapons. There are no partitions in the Dinh. The roof is supported by imposing wooden columns 70 centimetres in diameter from which hang long lacquered panels with sentences in Chinese characters.

Regularly the Dinh should contain only ritual objects. However, as it is not uncommon in Tonkin for villages to use the Dinh, apart from ritual ceremonies and meetings of the Communal Council, to accommodate the schoolmaster who teaches there, or lacemakers who set up shop there with their looms, the Indochina Commissariat, in agreement with the Initiative and Patronage Committee, thought it would be regrettable to leave such a vast site empty.

It was therefore planned that the large Jacquard loom, which shows the method used by Tonkinese workers to weave silk well before our arrival, would be set up in the extreme right wing; that on each side of the central bay of the sanctuary reserved for the cult of the genie, a certain number of mannequins dressed in ceremonial clothes to be used during processions or ritual festivals of the village would be installed.

The middle bays of each wing remain free to allow the circulation of visitors going to the pavilion located behind the Dinh.

A pavilion with three rooms has been built behind the common house.

a) The central room contains three paintings by the painter Inghinberty representing Tonkin under its clearly different aspects, the High Region inhabited by the mountain races, which, from the point of view of surface, represents 5/6 of the territory and the delta populated by the Annamites.

The third canvas shows the port of Haïphong.

Under the three canvases and on the fourth side of the room, which is covered by a large map, will be exhibited a certain number of ancient or modern art objects of a purely Tonkinese character, as it is understood that, in order to provide the necessary distance for the paintings to be displayed, the middle of the room will remain free and that the majority of the economic or artistic products of this Union country will find their place in the Central Palace of Indochina.

b) Two adjoining rooms in which six dioramas by the painter Virac are arranged, those in the right wing representing scenes from the Upper Region, those in the left wing views of the Delta.

To sum up, despite the need for the Commissariat de l'Indochine to restrict the importance of the "local" representation of Tonkin, for the reasons explained at the beginning of this note, the latter nevertheless remains an accurate reflection of the special characteristics of this region of the Far East, with the public's attention being drawn particularly, from the ethnographic point of view, to the distinction that must be made between the Delta and the Mountainous Region, from the economic point of view, on the indigenous crafts and family industries, and finally, from the administrative point of view, on the Annamite commune, the foundation of the whole organisation of this country, and on the building that each of them possesses, the Dinh, where public affairs are dealt with under the protection of the illustrious ancestors who were born there, and of the geniuses to whom the sacred cult must be rendered, such as to Confucius or to Buddha