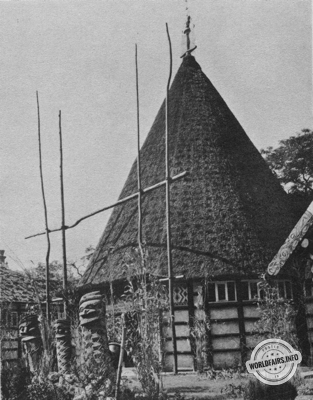 A journalist, having just visited Angkor, and walking down the Avenue des Colonies, stopped in front of the huts of the Etablissements français du Pacifique Austral:
Even with straw huts," he exclaimed, "you can make style! "

The nobility, the art of all this architecture of ephemeral materials struck him and he was right.

Are not palm and wood the materials of the first colonial residence, then of its outbuildings, kiosks and sheds? Are they not the materials of the indigenous huts that add picturesqueness to the bush and should become one of the attractions of tourism.
The Pavilion of New Caledonia and Dependencies is not a reconstruction of the Canaque residence. It is only an adaptation of the local style to modern requirements, an attempt to allow the straw huts to be, no longer a shelter that is hidden, but an ornament, putting beauty and cheerfulness where they are required. Thus the hut of the Wallis Islands has the shape of all the outbuildings of the colonial houses, but what grace already Maori and what colours. And it is in this way that it brings to the colonial man something new, an encouragement to make his home "more beautiful".

La Case de la Nouvelle-Calédonie, which houses under its high ceiling the treasures of the most modern Caledonian work, from rare metals to the most fragrant coffees and even the projects for the next monuments of the Capital, Nouméa, and which gives pride of place to decoration with the great fresco recalling the life of the natives - as it will later recall the great works of the miners and the colonists, the hut of the Canaque Chief shows the advantage that could be taken of this native residence, which has almost disappeared and which appeared so proud when it was camped at the top of an avenue of coconut and araucaria trees. Not even the door patterns, borrowed from taboos, and the colours of the smoky joists on the ceilings of the Wallis and Hebrides, give any suggestions for improving one's home.

And it is one of the many advantages of this admirable Exhibition that it enables every Colonial Group to rediscover the style which emerges from the humblest native architecture. What, in the grandiose setting of Paris, "looks like thatch and wood" can become, over there, in the isolated dwelling of the remote bush, a mark of adaptation, of initiative, of French genius. Nothing under his action is changed to the local colour, but here it is harmonised with the modern. It is renewed by regaining its former brilliance. It is an astonishing challenge that the art of the architects has won.

Yes, "even straw huts can have style". The Pavilion of New Caledonia, Loyalty, Hebrides and Wallis translates this effort and this desire for beauty in the simplest framework of customary life, it is a suggestion of Oceanic aesthetics, easy and fruitful, from which many will be inspired, in the happy archipelagos of French Melanesia.

The architects, Messrs Saacke, Bailly and Montenot, who are the authors of this happy achievement, are to be congratulated.
The French Establishments of the Austral Pacific are represented in Vincennes by three pavilions located along the main avenue of the French Colonies near and to the right of the Porte de Reuilly. They cover an area of 1,000 square metres.

It seemed interesting to reproduce the original habitat of these populations, reputed to be the most primitive in the world; which, in New Caledonia, have become more refined, but which nevertheless still exist in their primitive state in the New Hebrides condominium.
Vast and circular, the hut is supported by a large central mast also decorated with sculptures. A three-metre-high decorative frieze on the ceiling ramp represents only images of Canaan life. First, the family: in front of the high conical huts, the great chief is seated; behind him, his sons and his wife. The sons have put on a huge wig made of dog hair, slightly tinted with purple.

The second scene of the frieze represents the warrior life of the Canakas: the handling of the puzzle, the archery, the throwing of the javelin. The horrific figures of the warrior's protective genies are painted on the shields, which are meant to frighten the enemy.

The third scene represents the sorcerer surrounded by men who fear his power. The sorcerer has before him the hideous totems, symbolic figures of the occult powers. The warriors are in a circle around him and listen to him with respect because the Wizard is a fearsome man who predicts the future of the tribe, its harvests, its wealth, its wars.

The fourth scene represents the fisherman, the one who does not wage war but works to find food for the tribe by sailing on his frail skiff.

Finally, the last scene illustrates the agricultural industry of the Canaque, the one that makes the land rich, the copra harvest.
In the centre of the architectural group stands out the pavilion of New Caledonia, flanked on the right by that of the Wallis Islands and on the left by that of the New Hebrides.


The Wallis and Futuna Islands pavilion

On entering the pavilion on the right, reserved for the Wallis Islands, we see a room lined entirely with a remarkable collection of tapas, bark cloths prepared and decorated with art by the natives, and mats of various designs woven from pandanus leaves.

Samples of copra, trocas and numerous objects used by the natives in everyday life complete the décor and give an insight into the existence of the Polynesian populations.

In the gallery that leads to the central pavilion of New Caledonia, we find a series of documents, photographs, maps and paintings, eloquent testimony to the civilising work carried out by the Marist missionaries, the first occupants of these distant islands.

In the central pavilion, that of New Caledonia, the eye is immediately struck by the original decoration of this vast rotunda supported by an imposing central mast and secondary masts sculpted and decorated with geometric elements taken from Canaan art, and on which a remarkable collection of masks, trophies and indigenous weapons have been hung.

In this primitive and picturesque setting are grouped reproductions of the colony which give an idea of the riches that the French colonisation was able to draw from the Caledonian soil whose natural resources are as numerous as they are varied.

First of all, we note the important exhibition of mining products.

We then see an interesting exhibition of sea products, trocas, burgaux (mother-of-pearl shells) and their successive transformations to the finished object.

The products of the forest are represented by samples of wood such as Kaori, a highly sought-after wood for cabinet making, gum oak, sandalwood, etc. Finally, the products of the soil: coffee, copra and cotton.

Cotton of a superior quality comparable to that of the Egyptian "Sakel-laridis", whose 31 to 35 millimetre long silk is highly appreciated by specialists.

Magnificent skins of oxen, deer and goats indicating the importance and richness of animal husbandry as evidenced by the canned meat industry of which many samples are on display.

A relief map of the colony, numerous photographs and graphics, and paintings sent by local artists complete the picture of the economic and social activity of New Caledonia and give an idea of the important natural resources, both agricultural and mineral, that it offers and from which French colonisation has already been able to make magnificent use.

The pavilion on the left is reserved for the archipelago of the New Hebrides, placed under the Franco-British Condominium. Alongside a retrospective exhibition of the life of the famous "man-eaters", who are among the most barbaric and primitive tribes in the world, we find a number of agricultural products from New Caledonia. The samples of coffee, cotton, copra and cocoa attest to the immense wealth of these islands and the valour of our colonists.

Such is the general outline of the participation of the French Establishments of the Austral Pacific, carried out by its active and distinguished Commissioner, Mr. André, thanks to the support and encouragement given to him by the General Council of New Caledonia and the eminent Governor of this colony, Mr. Guyon.