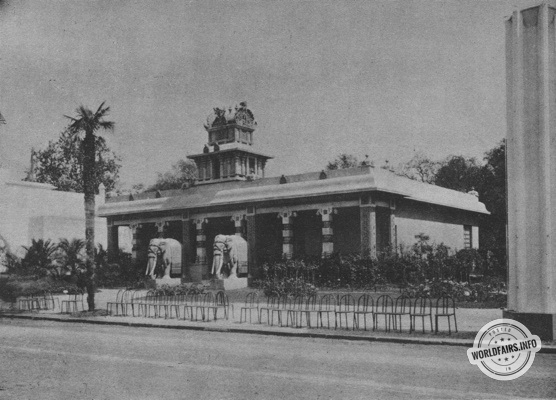 In a fine patriotic spirit and despite a very modest budget, the French Establishments in India, having decided to make a magnificent effort to participate in the International Colonial Exhibition, had entrusted to Mr. Jo. Ginestou, the Commissioner of the colony's pavilion. For the model of the pavilion, he asked Mr. Girves and Mr. Sors, architects who had graduated from the government.

The French India pavilion represents the classical Hindu house, so widespread in Pondicherry and in the other trading posts.
It is not an exact and faithful copy of a Pondicherry house but, according to the directives of Marshal Lyautey, Commissioner General of the Exhibition, an artistic stylisation, an interpreted and embellished relief of a classical Hindu house.

Its size is 20 m. by 20 m., its height is 6 metres. It consists of three rooms: i. the historical room; ii. the commercial room; iii. the artistic room.

A flowery veranda welcomes the visitors who, as soon as they enter, notice the poyal, a kind of stone bed on which Hindus of high rank lie down to receive their compatriots who are forbidden to enter a house because of their religion and their caste. Above the poyal hangs the ritual lamps of the Hindus.

A flower-filled open-air patio provides subdued light in the two side rooms, the historical and the commercial.
The artistic room, the third, contains a series of beautiful furniture, artistically carved by Pondicherry artists, in Indian wood, bith wood.

The furniture exhibited by French India was made by local workers; some of them are the work of the students of the Pondicherry School of Arts and Crafts.

The sculptors generally depict religious scenes, but local craftsmen may also copy the models submitted to them or make works according to sketches. It would seem that there is a possibility of creating a fairly appreciable commercial stream in this way.

The wood used is generally bith (Indian rosewood). The indigenous carvers, when their work is finished, are in the habit of coating the objects with coconut oil, the bith wood then takes on a black tint which gives it the appearance of ebony.
However, if the furniture was simply varnished with white copal, the wood would retain its natural colour and show very beautiful grain patterns.

Most of the furniture on display is from the École des Arts et Métiers in Pondicherry.

Like sculptors, Indian jewellers are generally inspired by religious scenes to make silverware.
Many silversmiths learned their trade at the Pondicherry School of Arts and Crafts, and some did a training course in France to improve their skills.

Hindu women, in general, are unable to do any sewing work; the natives simply drape themselves in pieces of cloth of varying lengths and ignore seams, buttons, pockets and other clothing accessories.

In order to enable the women and girls to earn a living, the nuns taught them the art of lace-making and embroidery. The Sisters of St Joseph of Cluny exhibit a beautiful collection of laces made in their workshop in Pondicherry by their protégés, these embroideries are of a perfect execution.

One of the main attractions of the art room is a Hindu-style display case containing French Indian garnets, mounted by a goldsmith, Mr. Charpentier, jeweller.

Set in mounts either in gold or platinum, or enhanced by brilliants, the garnets from our French Establishments are artistically highlighted and it is pleasing to note the fine results obtained by Mr. Charpentier in his rich presentation of stones from our colony.

Note the friezes by three fine French painters: Messrs. Montassiez Poisson and Poitevin, all three conceived in an exotic style but nevertheless painted with a very personal feeling and a truly artistic conception.

The powerful elephants of the statuary Jean Magrou, knight of the Legion of Honour, author of the Latin Genius, Place du Palais-Royal.

The staff decorations on the ceiling, Hindu style, by M. Laffite.

The decorative ensembles of the master decorator Claude Salvy.

The magnificent floral decoration executed by M. Nonin, rose gardener, and plans of Pondicherry dating from 1700 and 1720 kindly lent by the Archives office of the Ministry of Colonies.

The statues and especially the dancing Siva placed in the flowered patio are part of the Loo collection.